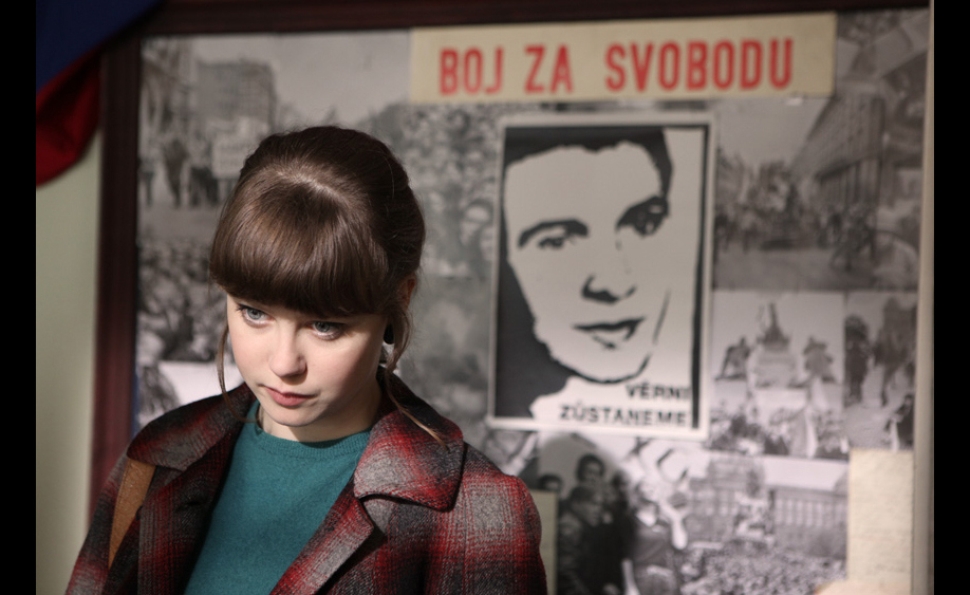 Burning Bush starts four times. That’s appropriate, considering the subject matter, a spark to a revolution that took 20 years to culminate. Agnieszka Holland’s nearly four-hour film—originally released as three episodes for HBO Europe, now getting a two-part theatrical release—opens with black-and-white images of youngsters grooving to late-1960s pop. Then title cards explain the political situation in Prague ’68. (In short: not good.) Next comes full-frontal symbolism, in the form of a switchman cranking levers and setting a kettle to boil. And finally, the modern historical milestone of Jan Palach pouring gasoline on himself and striking a match in Wenceslas Square as protest to the Soviet occupation of Czechoslovakia.

The blaze quickly fans out in multiple directions: the student groups, police, puppet government, and struggling reformers stashed in positions of power all spring to their feet, anxiously waiting to see how the others are going to react. The students try to organize a general strike, and the police are terrified of copycat incidents. Holland briskly introduces us to a slew of characters before heading outside of Prague to meet Palach’s family.

As Palach’s mother Libuse, Jaroslava Pokorná has her requisite scene of tormented wailing, but when the state adds insult to her grieving, she slowly turns to stone. A party bigwig named Vilem Novy (Martin Huba) gives a speech suggesting that Palach was duped into the act, and not of sound mind. Palach’s mother (and brother, played by Petr Stach) refuse to accept Jan’s death as anything other than a bold political act, and try to sue Novy for libel. The sharp Tatiana Pauhofová plays Dagmar Buresová, the lawyer and mother of two who risked her safety and livelihood leading a quixotic charge at the heart of Soviet-backed Czechoslovakian communism.

While revolution is a topic usually besotted with alpha males marching, shouting, and cracking skulls, Holland effortlessly shows the women driving the story. The plaintiff and advocate are steadfast despite threats and warnings, but they don’t just run up against a brick wall of men. Women in tenuous positions of power are ever-present, from Palach’s burn-ward doctor to the put-upon judge who must hear Dagmar’s case. (The defendant’s lawyer still barges in late and asks the judge to make him some coffee, though.)

Holland makes good use of her long runtime, giving viewers space to roam the fluorescent-lit halls of hospitals, or soak in the bloodstained marble staircases at police headquarters. A borderline-atonal score by Antoni Komasa-Lazarkiewicz chimes in during the recurring moments of heartless bureaucratic repression, as well as the few shimmering moments of humanity. A highlight includes a disgusted police officer (Ivan Trojan) taking his family west, though he has to get out and push when his automobile stalls out at the border. His children gaze through the metaphor-rich back windshield, and though description may make it sound cheesy, Holland’s deliberate pace sells the moment well.

The film begins broadly, but does, unfortunately, narrow down to a simple, doomed courtroom procedural. While this works well as a history lesson—a pace-by-pace examination of how a belligerent system can squelch a nascent rebellion through silence and obfuscation—it’s undeniable that the final third of the movie lacks some of the opening’s drive. Still, the performances, particularly Pauhofová’s deft attorney and Trojan’s dispirited detective, maintain a firm, sympathetic grip. (It surely doesn’t hurt that Trojan somewhat resembles John Sayles, the noblest of all of God’s creatures.)

Burning Bush is a rare accomplishment. It’s a political film with clear heroes and villains, and true to its HBO roots, it works as a fleet-of-foot juicy plot-delivery system. The first three hours positively zoom by, and the close at least holds on to the ball. But it doesn’t shy away from sly visual opportunities when they present themselves. Holland shoots politicians through doubling refracted glass, pauses for old lawyers crawling around the floor looking for cockroaches, and includes more than any one film’s share of workmen in the background, literally whitewashing buildings. Hardly subtle, but a nice touch all the same. And for those who don’t know their Eastern-bloc history, a nice epilogue saves viewers a trip to Wikipedia.