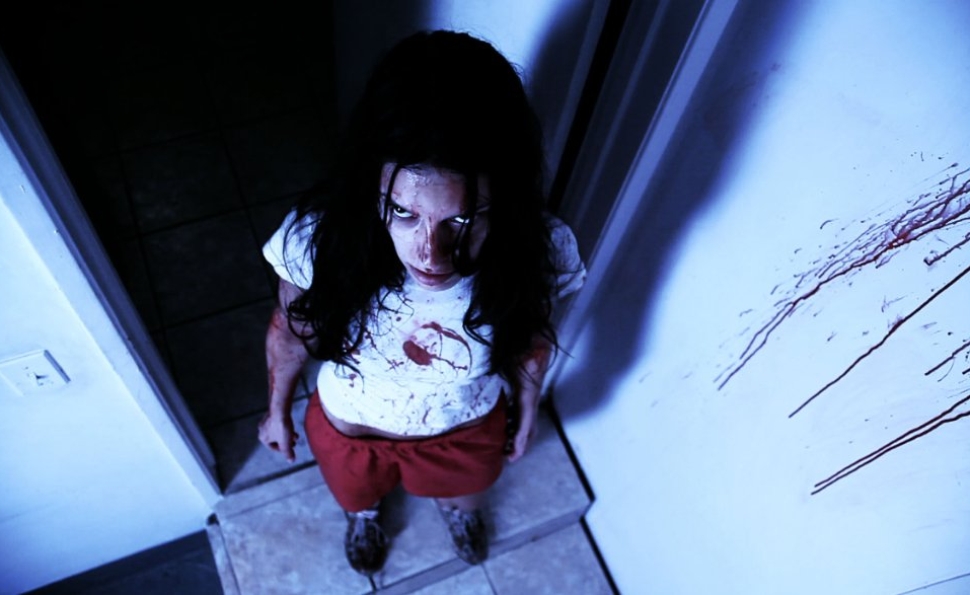 On your mark, get set, go find something else to watch! Because The Human Race, a dreary, smeary, low-low-budget but even lower-inspiration horror flick from British writer-director Paul Hough, is likely to leave viewers rueing the craven, disappointing species into which they were, through no fault of their own, born.

Truly, cinema’s ability to compress and expand time itself, as though ’twere nothing more than a deck of cards leaping merrily between the hands of a dextrous shuffler—that’s the medium’s gift to the world. The Human Race ably demonstrates this mysterious power: Although it runs—but more often walks, limps, and in the end, crawls—less than 90 minutes with credits, and includes the word race in the title, it still manages to feel like it’s never going to end.

Here’s the premise: Eighty unlucky contestants from around the world—meaning 77 Los Angelenos, two kids from Japan, and one ponytailed guy who seems vaguely Italian—are teleported via iMovie whiteout effect to a concrete purgatory that looks like Whittier, California. Each of them hears a gravely intoned set of instructions: Follow the marked path. Step on the grass and you die. If you’re lapped twice, you die. RACE OR DIE. Except not by the pool, obviously. No running by the pool. I shouldn’t have to tell you guys this.

Seems simple enough. Naturally, several people—probably the sort who take the tags off mattresses and eat the silica gel in the box when they get a new pair of shoes—promptly wander into the grass and suffer immediate, acute, explosive swelling of the cranium, or “Scanners Syndrome,” as it’s more colloquially known.

What’s interesting about this is that one of the instant casualties is a girl Hough has spent several precious minutes of his picture’s slender running time introducing. He carefully outfits her with a backstory about a younger sister who died of lymphoma, and then her own lymphoma diagnosis, which leads her to curse God and embark upon a vigorous regimen of chemo pills, jogging, push-ups, and then a return visit to the oncologist’s office for the joyous news her cancer is in total remission. But then, there’s a flash of white, and she’s standing on the grass, and then she’s a goopy red stain on someone else’s shirt. Someone else who knows how to follow instructions, dammit.

It doesn’t take long for everyone to figure out there is no runner-up in The Human Race, and it’s pretty much Lord Of The Flies from there. Some racers even repurpose the uncannily scythe-like arrows the heard-but-unseen Gamemakers have posted to mark the race course. A few suckers try to cling to their precious human dignity, wringing their hands before lapping someone for the second time, knowing it will make the slowpoke’s slow, poky head explode. For audiences in cities like, say, Washington D.C., where the sidewalks just happen to be thick with slow-moving, iPhone-contemplating tourists wandering three and four abreast, this will seem like sweet, sweet justice, and/or a right and necessary thinning of the herd.

Every time a racer is eliminated, the same creepy chorus announces the number remaining in play. Again, the count starts at 80. Eighty! The Hunger Games had what, two dozen? When the three least-scrupulous dudes in the race agree to team up and start pushing people onto the deadly grass, assembly-line style… well, it’s hard to condone, but it’s easy to admire their industriousness. And at least their victims die quickly, by contrast with the many whose bleeding, writhing, and suffering Hough lingers over. The wholly unconvincing digital blood effects don’t make the impulse any less sadistic.

Still, the film’s premise is imaginative, save for the parts obviously cribbed from Battle Royale (the two uniformed Japanese schoolchildren make sense here only as an acknowledgment of the debt), The Thing, the Saw franchise, Predators, three or four separate episodes of TV’s original 1960s Star Trek, the aforementioned Scanners, the somehow-not-yet-a-movie Stephen King story “The Long Walk,” and the video for “Let’s Work,” the Reaganomics-endorsing first single from Mick Jagger’s immortal 1987 solo album Primitive Cool. The latter depicted a cross-section of working-class folk (plus a hilarious turban-wearing, AK-47-carrying Mujahideen fighter) engaged in a genial foot race on the freeway via green-screen effects that were state-of-the-art at the time. It far surpasses The Human Race in entertainment value, and it’s 83 minutes shorter.

Aside from The Girl Who Did Not Have Any Tattoos That We Know Of But Who Did Beat Cancer But Then, Sadly, Stepped On The Grass, Hough invests two other characters with backstories, and still another pair with personalities, though he never dares cross those streams. The first pair are Army vets who served in Afghanistan together. One of them has become the sort of beloved junior-high teacher who races his wheelchair-bound students down the hallway in his desk chair, earning the reprimand, “This is not your personal race track!” His buddy lost a leg in combat, but remains vigorous and capable.

The other pair are a deaf man and woman who are actually debating human nature in sign language when they get white-flashed into the human, watchacallit, race. The voice giving them their marching orders is the first sound either of them has ever heard. It also emerges that at least one of them is a virgin, which leads to some predictable, hard-to-watch bad behavior once these two begin to believe one or both of them will die. “Relatively restrained in its depiction of attempted posthumous sexual assault” is in fact the most admiring thing that can be said of this film.

Well, almost. It also contains the line, “I just stepped on a baby’s hand!” It gets half a star for that.