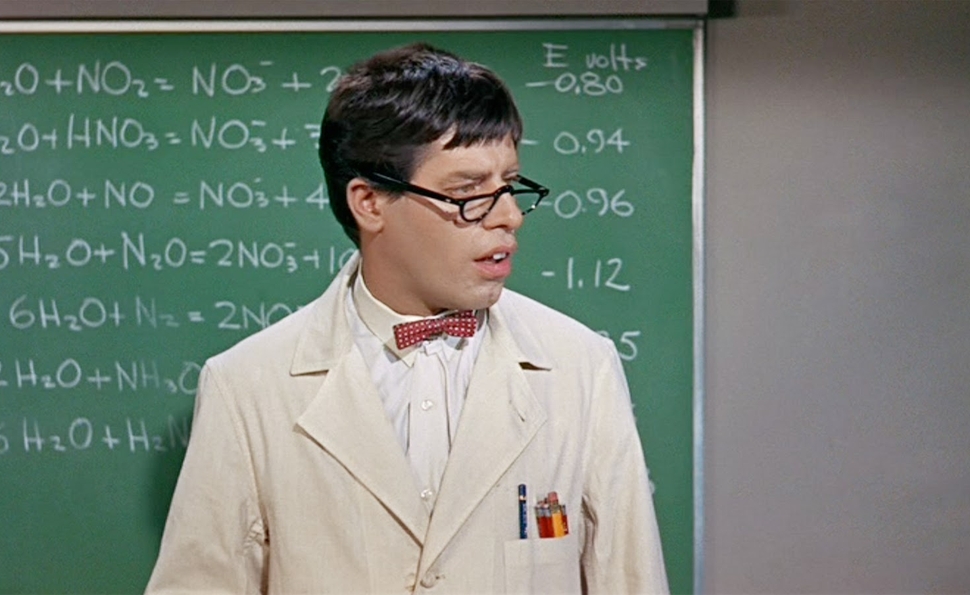 By the time Jerry Lewis co-wrote, co-produced, directed, and starred in The Nutty Professor in 1963, he’d been acting in movies for nearly 15 years, and had worked during that stretch with bright comedy minds like Norman Taurog and Frank Tashlin. But Lewis had only been a director himself since 1960. The Nutty Professor was Lewis’ fourth film behind the camera, and while the three pictures that preceded it are frequently brilliant, The Nutty Professor best reveals what Lewis picked up from Tashlin’s anything-for-a-gag philosophy, as well as what Lewis absorbed from people like Charlie Chaplin and Jacques Tati, who were both great film comedians and visual stylists. Working with his longtime collaborator Bill Richmond, Lewis constructed one of his sturdiest scripts in The Nutty Professor, and he wasted scarcely a minute of it.

Lewis essentially plays two characters in The Nutty Professor—one of which has become a go-to for anyone doing Jerry Lewis impressions. Professor Julius Kelp is based on a socially awkward, nerdy gentleman who cornered Lewis and his partner Dean Martin on a train in 1955; and Lewis plays the professor not just as a man with an exaggerated nasal voice, but as a lovable loser who gets so lost in his own head that he drones on obliviously. Some of the funniest scenes in The Nutty Professor don’t involve Kelp croaking and yelping, but him rambling on about modern music, or about why he failed to put his glasses in his locker at the gym. (“I would’ve put them there myself if I’d known there was a restriction… Some people use them for a façade, I use them for eyes.”)

The other character Lewis plays in The Nutty Professor is the one who pushes the movie close to genius. When Kelp worries that he’s too weak and cowardly to win over his pretty student Stella Purdy (played by Stella Stevens), he devises a formula that makes him stronger and studlier. The formula turns Kelp into “Buddy Love,” an oily crooner who becomes a hero to the younger generation and a magnet for ladies because of the way he oozes sarcasm and contempt. The Nutty Professor is based on Robert Louis Stevenson’s Dr. Jekyll And Mr. Hyde (which Lewis had wanted to adapt since he was a teenager), and the biggest joke of the movie is that the “monster” in Lewis’ Jekyll/Hyde story is a smarmy entertainer.

Almost from the moment The Nutty Professor debuted in the summer of 1963, critics and Lewis fans have speculated that Buddy Love is based on Martin, from whom Lewis was estranged at the time. Lewis has always denied this; and given how little Love’s performing persona resembles Martin’s, Lewis is probably telling the truth. (If anything, when he shouts things like, “Innkeeper! Got a sexy light? Lay it on me!” Buddy Love is more like Martin’s Rat Pack buddy Frank Sinatra… or like Lewis himself, at his most aggressive.) The joke still plays, though, even if it’s not targeting anyone specifically. Mostly Lewis is spoofing the kind of macho man sold by the advertising industry, exposing the thin line between arousing the opposite sex and becoming a total creep.

Even given The Nutty Professor’s solid premise—which allows for a lot of variety in Lewis’ gags—the movie is still uneven at times, as it repeats some of the same narrative and comedic ideas. That repetition is born of Lewis’ willingness to let co-stars like Howard Morris and Del Moore vamp amusingly for minutes on end, in scenes that aren’t strictly “necessary.” And even when the plot’s not moving forward, The Nutty Professor offers a lot to look at, from the rich hues of the chemicals in Kelp’s lab and the fabric of Love’s suits, to the way the camera lurches down the street from Love’s point of view, right before the character is revealed for the first time.

The best visual touches in The Nutty Professor are the Tashlin-like blackout gags: Kelp trying to elevate his posture in a low chair by slipping a thin book under his butt; Kelp yanking on barbells so hard that his arms stretch all the way the floor; and so on. But these jokes serve a purpose, too, to illustrate how so many people—not just the movie’s hero—try to tweak their personalities, reshape their bodies, and shift their positions in ways less dramatic than the Kelp-to-Love transformation. In the middle of the film, there’s a brief montage of Professor Kelp staring at Stella and imagining her in different outfits, and while it’s a moment of daydreaming for Kelp, the truth is that the Stella who sits in Kelp’s class and the Stella who lets Love hit on her seem like two very different people, too. That’s not a continuity error on Lewis’ part. That’s a savvy piece of direction.

The 50th anniversary “Collector’s Edition” Blu-ray set of The Nutty Professor offers a generous package of tchotchkes, behind-the-scenes documentaries, and additional Lewis material. On the souvenir side, the set contains a book of storyboards, a script, a collection of Jerry Lewis’ inspirational quotes, and a CD of his prank calls. The box also adds two more classic Lewis films: 1960’s Tashlin-directed Cinderfella and 1961’s The Errand Boy, on separate DVDs (not Blu-ray), with commentary tracks by Lewis, recorded with his friend Steve Lawrence. These discs and their extras have been previously released, as have a lot of the extras on the Nutty Professor Blu-ray. The major new addition to The Nutty Professor disc is a half-hour documentary called “No Apologies” that combines footage from Lewis’ recent stage act (where he talks about his life and answers questions from the audience) and a backstage interview. Then The Nutty Professor repeats the DVD’s informative 45-minute documentary about Lewis’ directorial career—and where this movie fits into it—as well another Lewis/Lawrence commentary track, in which Lewis explains to his pal, “If you can sustain the comedy without dialogue, then you’re on your way to good stuff.”