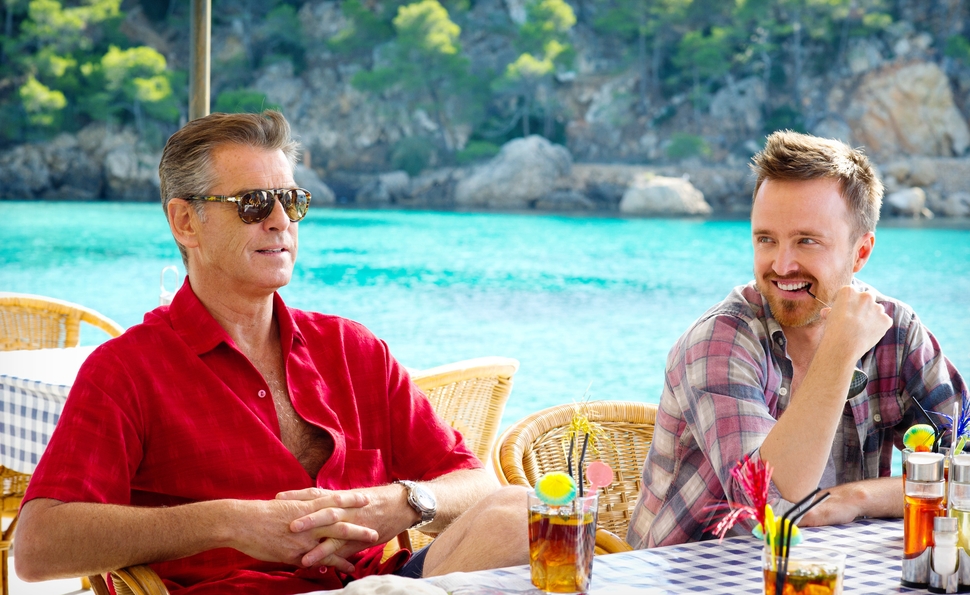 A Long Way Down

Adapted from a 2005 novel by High Fidelity and About A Boy author Nick Hornby, A Long Way Down can at least lay claim to one of the darkest meet-cutes ever filmed. Opening on New Year’s Eve, it begins with Martin Sharp (Pierce Brosnan), a disgraced TV personality recently out of prison after serving time for unknowingly sleeping with an underage girl, climbing to the top of a tower block with a ladder in tow and a mind to throw himself off before the clock strikes midnight. Once there, however, he runs into not one, not two, but three others with the same notion: Maureen (Toni Collette), the single mother of a severely disabled son; Jess (Imogen Poots), the hard-partying daughter of a prominent politician (Sam Neill); and J.J. (Aaron Paul), an American musician who darkens an already sober occasion by telling the others he’s dying of cancer.

The problems with A Long Way Down begin with the level of difficulty the film sets for itself in that opening scene, introducing four characters wiling to chuck it all in who are also capable, even eager, of engaging each other in witty banter once they decide, hey, it might be a good idea to give life another six weeks or so and then take the plunge. The film wavers between the drippy and the glib from start to finish, sometimes within the course of a single scene, as the foursome form an impromptu support group then become national celebrities when the tabloid press gets ahold of the story.

A Long Way Down picks up and discards that element of the story when it suits it, briefly focusing, for instance, on Jess’ claims that angelic intervention kept them from jumping, only to forget that detail after a scene. Then again, it picks up and discards most elements as it sees fit. Maureen is defined by her exhaustion in caring for her son, yet the son conveniently gets packed away when the film decides to send everyone on vacation together. Jess talks of being haunted by her sister’s disappearance, then stops talking about it. The script by Jack Thorne keeps finding ways to flatten out characters that were already troublingly flat in Hornby’s novel.

At least there, though, they had a little more space to be themselves. Like the source material, A Long Way Down lets its four protagonists trade off narrating the story. Unlike the novel, it never does much to flesh them out beyond first impressions: pampered celebrity, harried mom, party girl, troubled artist. That work’s left to the cast, which does more than might be expected with the material. Brosnan’s always at his best when playing characters with cracked personalities beneath their slick exteriors, and Martin might stand proudly in his gallery of rogues and fuck-ups, even if the film gave him room to develop the character. That goes for the rest of the talented cast: Collette seems penned in by Maureen’s nervous habits. Poots plays manic to Paul’s depressive, but there’s no depth to the relationship. When the central friendships start to fray, it means little, since they never felt real in the first place, just a lot of one-liners fighting against mopey songs and a soppy score. Chaumeil makes nice use of some of London’s funkier corners and sets up some lovely long takes, but though the film looks good and is filled with appealing actors doing their best to keep things animated, nobody seems to have noticed that A Long Way Down goes nowhere.

(A Long Way Down is on VOD now, and will be released in theaters July 11th.)