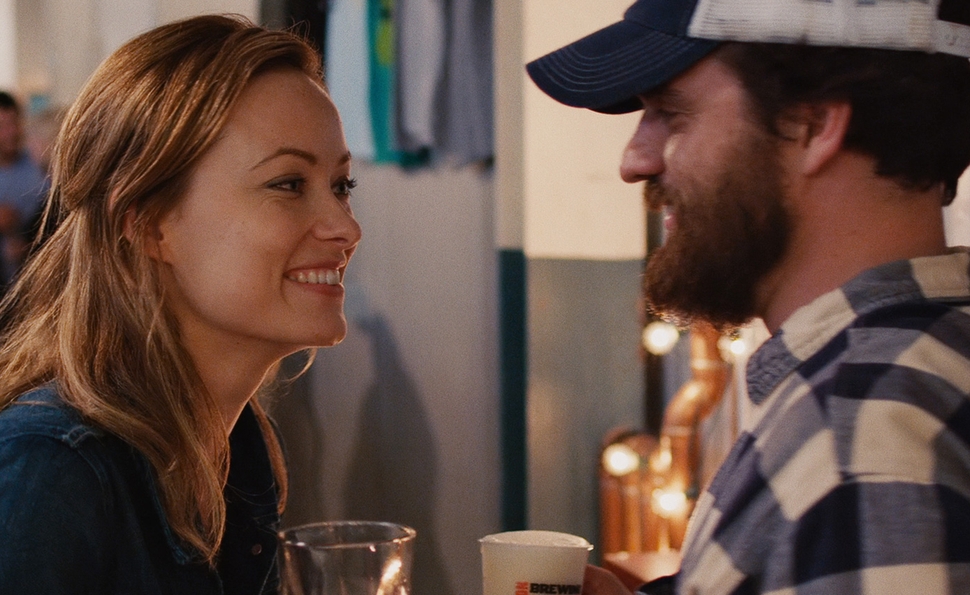 Mumblecore is at a strange crossroads, not unlike the artsy, bohemian urban twentysomethings who have historically been its subjects, creators, and extremely niche audience. Leading lights like Greta Gerwig and Mark Duplass have broken into the mainstream in a big way: Noah Baumbach channeled the spirit of mumblecore in Greenberg and Frances Ha with the help of Gerwig, an enormously appealing young actor and filmmaker. Duplass, meanwhile, is the star of the hit FX sitcom The League, and a popular supporting player in big studio films like Zero Dark Thirty. He and his brother Jay also co-directed Cyrus and Jeff, Who Lives At Home, hybrids that feature mumblecore’s stumbling awkwardness and everyday mundanity, but with bona fide movie stars in the leads.

But Drinking Buddies ultimately belongs to Olivia Wilde, who tackles the lead role as Kate, an employee at a cool Chicago craft brewery, where her days are spent hanging out with the boys, drinking the beer that pours as freely as water, and flirting outrageously with co-worker Luke (Jake Johnson). Kate and Luke are so perfect for each other that God herself seems to be yelling at the two to finally hook up, already, and put an end to all the sexual tension. Luke and Kate aren’t just soulmates, they appear to be gender-switched versions of each other. Still, they can’t commit to something so incredibly right, because they’re in relationships with people who are wrong for them.

Kate is inexplicably involved with Chris (Ron Livingston), who’s as stiff and awkward as his girlfriend is sexy and carefree, while Luke is shacked up with Jill, a nice but square young woman played by Kendrick. It’s never particularly clear what Kate sees in Chris, or why Jill is attracted to him during an ill-considered couples trip to a cabin.

It would appear a switcheroo is in order (not unlike in the movie The Change-Up, also starring Wilde). In a conventional romantic comedy, these mismatched lovers would leave their current partners in a mad rush to find their soulmates, but Drinking Buddies keeps throwing obstacles in their road to happiness. Luke and Kate talk around their intense sexual attraction so much that the words left unsaid, and the intense, unspoken desire behind them, become far more important than the words that are.

In the early going, Drinking Buddies alternates between the hyper-gregarious banter of conventional rom-coms, where flirtation is generally polished to an artificial sheen, and the raw inarticulateness of mumblecore. But as the film progresses, the silences and awkwardness become more pronounced. Wilde delivers a credible performance as a woman whose external brassiness and rock-star swagger bely an underlying vulnerability, but she nevertheless feels painfully miscast. Wilde possesses an exotic, otherworldly movie-star beauty that makes her a natural for popcorn fare like Cowboys & Aliens, Tron: Legacy, and The Incredible Burt Wonderstone, but seems distractingly out of place here. Casting a glamorous movie star might be good for the film’s commercial prospects, but it harms its aspirations to verisimilitude.

Like too many of Swanberg’s films, Drinking Buddies is aggressively inconsequential. The film stays true to Swanberg’s roots, even if it means making a wispy little slip of a movie that indulgent audiences will not have to get blackout drunk to forget. It deserves credit for avoiding the conventions of romantic comedies and defying audience expectations, but only to a degree. Instead of hitting the expected notes and beats, Drinking Buddies instead ambles sideways. It’s headed nowhere in particular, but at least the voyage is pleasant.