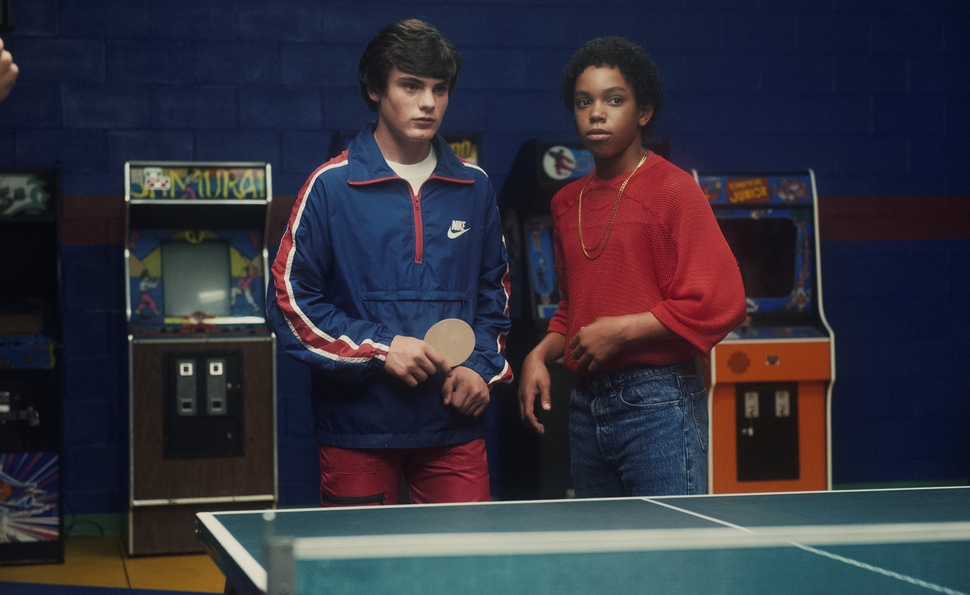 The 1980s aren’t just the setting of the dire new retro coming-of-age movie Ping Pong Summer. The decade also imprints the film’s aesthetic, themes, casting, and just about every other aspect of its production. In other words, the 1980s represent the totality of Ping Pong Summer. Take away the loving, lingering shots of giant boomboxes, Icee machines, and Reagan-era videogames, or the soundtrack rich in the 808-heavy sounds of early Run DMC, and the film would have nothing. It offers a Pixy Stix rush of nostalgia that wears off quickly.

The problems begin with casting Marcello Conte, an actor with the delicate, androgynous prettiness of a male model or a young Emile Hirsch, in the role of Rad Miracle, a hapless, unpopular 13-year-old nerd who heads out to a shabby seaside Maryland town for the summer with his family in 1985. To undercut the character’s rock-star beauty, Conte delivers his dialogue in a flat, affectless monotone that makes his lines seem even clumsier and more awkward than they actually are.

Brad represents a cultural stereotype that was exhausted in 1985, when the film takes place, and now seems positively prehistoric: the nerdy white would-be B-boy whose love for hip-hop slang, dance, and attitude stands in sharp, ostensibly comic, contrast to his hopeless geekiness and whiteness. In a typically mothballed gag, Brad’s attempts to beatbox are mistaken for the sounds of frenzied masturbation by his mother (Lea Thompson), while in a sequence that somehow made it into the film, the protagonist patiently explains to his cheapskate father (John Hannah) that in the context of hip-hop slang, the word “bad” actually means its antithesis, so an establishment being “bad” would paradoxically constitute high praise.

The film’s sole twist is to give its Run DMC-worshipping protagonist a black sidekick (Myles Massey) who is just as enamored of hip-hop as Brad but, if anything, even more of a dork than his Caucasian buddy. But that mild twist on convention—and it may be the only time the film doesn’t lovingly honor conventions in their purest, most orthodox form—rings hollow once it becomes apparent that Brad and Massey’s Teddy Fryy are essentially minor variations on the same bland dweeb, with Teddy as a somewhat more aggressive and nasal style of insufferable dork.

Ping Pong Summer sends its protagonist through a predictable gauntlet of coming-of-age challenges. First and foremost, there’s the preppie dream girl to be wooed and won, in this case Stacy Summers (Emmi Shockley), a ditzy rich girl addicted to a strange Slushee-like concoction known as “Funk Punch.” Then there’s sneering, aristocratic bully Lyle (Joseph McCaughtry) and his chubby, redheaded sidekick Dale (Andy Riddle), who’s quick to bolster his pals’ words with unconsciously homoerotic taunts of his own.

This modest but shrill, unpleasant little sleeper builds to a climactic ping-pong match where Brad and Lyle square off in an battle of broadly drawn teen-movie archetypes: the good kid and the bully. Everyone in Ping Pong Summer falls neatly into a ubiquitous stereotype, including the wisecracking, sarcastic goth older sister and the spooky old mystery lady (Susan Sarandon), who turns out to be a gentle mentor figure, not the weird, witch-like monster the neighborhood children make her out to be.

The film’s reliance on formula and stereotypes wouldn’t be so frustrating if that formula worked and provided the glib pleasures the filmmakers are going for; instead, Ping Pong Summer feels stilted, undernourished, and oddly sour. Nostalgia can only get a film so far, and Ping Pong Summer bumps up hard against the limits of nostalgia in its first 10 minutes, then becomes not a breezy blast from the past, but a grueling endurance test that makes the film’s 92-minute running time feel like several eternities. This soggy slice of white bread represents a toxic, almost unwatchable combination of bland and dumb.