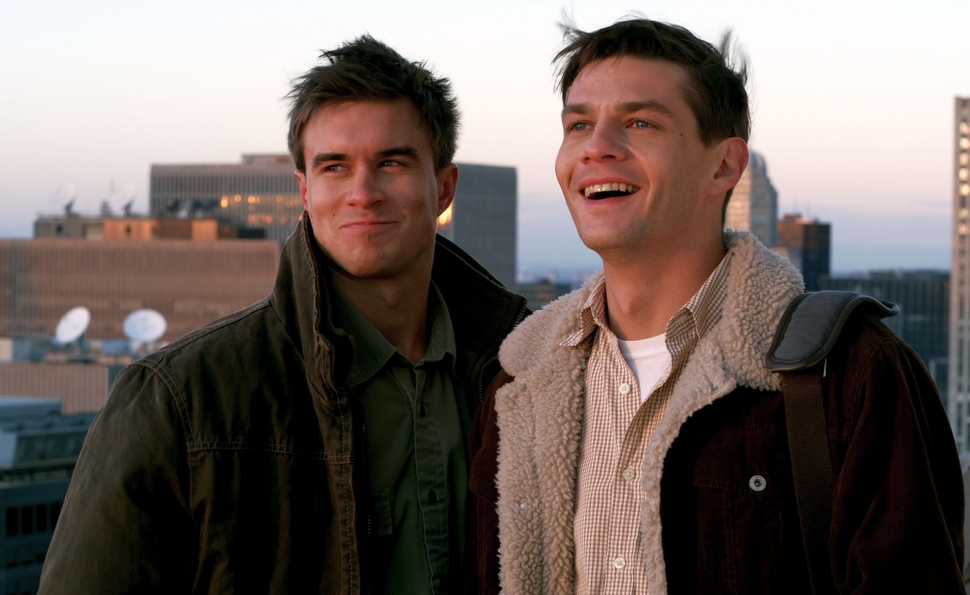 Set in the 1990s, when “Don’t Ask, Don’t Tell” was standard operating procedure in the United States Navy, Burning Blue examines the ramifications of clandestine gay activity among a group of fighter pilots: Call it Brokeback Maverick. Adapted and directed by DMW Greer from his own acclaimed, reputedly semi-autobiographical West End play, the film betrays its theatrical roots, but it’s been produced with passion on an obviously small budget. While Greer may be a better playwright than filmmaker, he does a fine enough job of placing the action in a believably strapping military environment.

Trent Ford and Morgan Spector star as Dan and Will, two pilots with a close bond that extends to keeping secrets; early in the film, Will’s bad vision leads to a crash, but Will chooses not to inform their superior officers. The metaphor here about flawed ways of seeing isn’t subtle, and Greer’s screenplay is consistently literary, with lots of show-offy, gay-innuendo-laden dialogue (“Are you getting testy with me?”) to sketch the thin line between macho camaraderie and sublimated desire. The plot turns on an excursion Dan and his wingmen take to a gay nightclub in New York City, where they’re spotted in several compromising positions. From there, the film switches into quasi-procedural mode, as a government agent (Michael Sirow) seeks to figure out what manner of unwholesomeness might be going on below decks.

Burning Blue has lots of scenes where its male leads gaze longingly at each other, which is meant to be melancholy and erotic, but unfortunately skirts close to parody. Greer also isn’t an especially supple dramatist, and rather than conveying his themes naturally through the ebb and flow of the story, he has his characters state them out loud. (One exchange between Dan and a homophobic black investigator is so literally on the nose that the scene ends up with a deviated septum.) As a result, the naturalism of some of the performances becomes compromised, although Spector is excellent as a man suffering the agonies of a love he can’t and won’t act on. His hard features and hollow eyes give him the look of an aviator on autopilot.

Burning Blue’s consistent claustrophobia makes sense for a story about men hiding in the closet in a subculture that’s already cut off from everyday reality, yet Greer has also done his best to open the play up with exterior shots of aircraft carriers and fighter jets. This modestly produced film isn’t badly made (aside from the sloppy use of black and white in a few sequences) and it makes admirable attempts to tackle an unfortunate—and only recently concluded—chapter in the history of the U.S. Navy. But as we all know, good intentions don’t necessarily equal good movies, and Burning Blue expends most of its energies mitigating against potential flaws, with very little left over to push it over the top and into the realm of quality independent cinema.