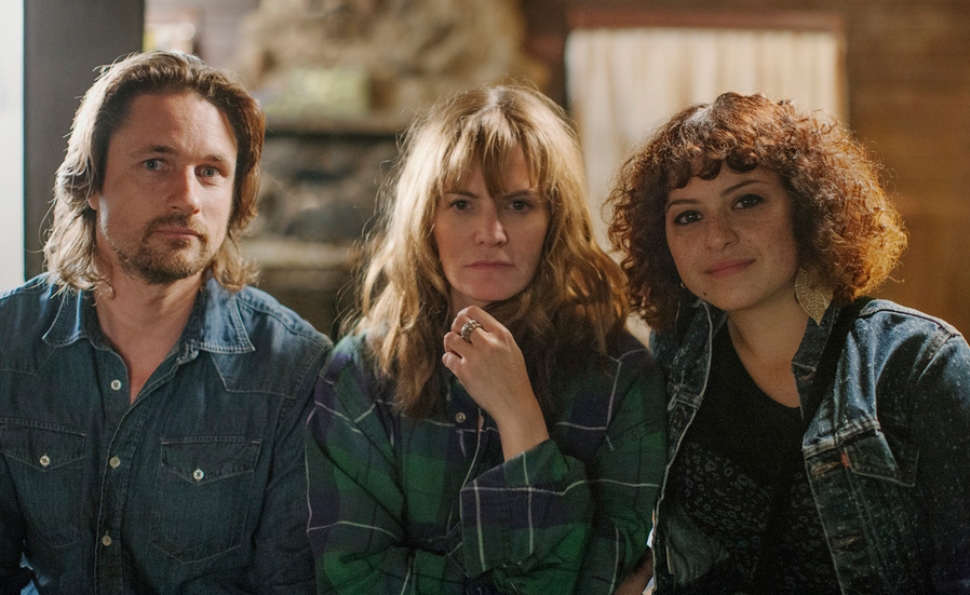 The words “Meat Loaf” always look funny in a film’s opening credits, especially when those opening credits are laid against a backdrop of severe images from the Somali Civil War. Women shuffling through the desert in burkas. Men in keffiyehs, standing by with machine guns. “Meat Loaf.” Strap yourself in for some illuminating entertainment! At least in Fight Club, the iconic performer was billed more austerely as “Meat Loaf Aday.”

This may seem like a petty sticking point (partially because it is), but it’s also the most interesting thing that happens in Jane Weinstock’s ghastly, unfortunately titled psychodrama The Moment. Weinstock’s first feature since 2003’s Easy, The Moment is a stilted, asinine Hitchcockian exercise that ultimately serves as little more—and often considerably less—than a needless reminder of how difficult it is to execute this kind of material.

The Moment, which could allude to any number of different incidents, and is never explicitly explained, stars a somnambulant Jennifer Jason Leigh as Lee, a war photographer who has recently been traumatized by a bombing she survived on the job. When the film begins, Lee is desperately trying to make contact with a sullen ex-lover named John (Martin Henderson, who doesn’t seem to have aged a day since The Ring). John has gone missing, and the ominous music that plays as Lee searches his house suggests he isn’t going to be found anytime soon; there’s “absent,” and then there’s “maggots crawling over the chicken wings that were left on the kitchen table.” Lee seems to have composed herself by the time she attends a gallery show with her daughter (Alia Shawkat) that evening, but the event grounds to a halt when Lee abruptly strips naked in the middle of the floor, a cry for help that lands her in a psychiatric institute.

Lee is candidly convinced that she murdered John, but no one is willing to believe she killed a man whose body has yet to be found. While hospitalized, Lee meets a gregarious man named Peter (also Martin Henderson), a dead ringer for the missing man. The film has done little to identify the characters, and even less to make them interesting, at the point where Weinstock starts playing with time in a way that almost immediately renders the film incoherent.

The Moment recklessly cuts between her relationship with John and her relationship with Peter, two men differentiated only by their scowl and an arm tattoo that is introduced as a distinguishing mark, then almost never seen onscreen again. The resulting confusion, which is in distinct contrast to the film’s irritatingly instructive score, may be intended to help convey Lee’s deepening psychosis, but the tactic doesn’t reveal the instability of her reality so much as it exposes the artifice of her predicament.

The themes are intriguing, but the velocity of the film’s plunge down the rabbit hole turns them hypoxic. And the shaky camera compositions—which artlessly fail to discriminate between any of the various narrative strands—make the film seem as deeply uncertain of Lee as she is of herself. The Moment is at its most promising when it attempts to root the behavior of its utterly lifeless characters in a sinkhole of self-hatred. Lee’s journey most lucidly coheres as a portrait of a woman grappling with her own guilt; her photography returns her to a past she can preserve, but never change. But the extent to which Weinstock fumbles with her story’s chronology undoes any of the film’s potentially interesting overtures toward time and its latent damage, as her movie slips from amateurish to laughable in an unfortunate series of late-game plot twists. A risible film but not an evil one, The Moment is made all the more painful by its seemingly earnest intentions. This isn’t a fun film to hate, which makes it that much harder to endure.

Oh yeah, and Meat Loaf plays a detective. He doesn’t really do anything.