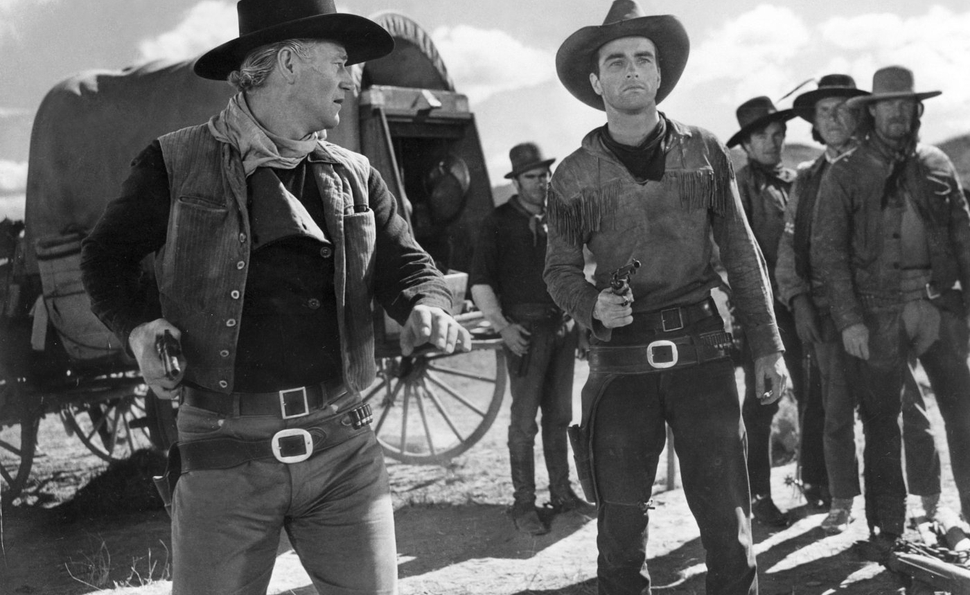 “I didn’t know the big sonovabitch could act,” John Ford said of John Wayne after watching Red River in 1948. Or so the story goes, anyway. It’s one of those quotes that seems too perfect to be real; after all, if anyone knew what Wayne brought to a movie, it was Ford, who made him a star with Stagecoach in 1939, and kept working with him in subsequent years. Even today, Wayne tends to get talked about more as a movie star than an actor, and it’s telling that even his most frequent collaborator could jokingly think of him as another piece of scenery in the landscape. Maybe that’s why it took another director, Howard Hawks, to push him further than he’d ever been pushed with Red River, which opens with Wayne playing a typical Wayne hero—a strong, independent, mountain-sized man who looks good in Western wear—then turns him into a prairie Captain Ahab. Even if Wayne didn’t reveal hidden depths as an actor, it would still be a savvy bit of casting. When he does, it helps make the film a masterpiece.

As masterpieces go, however, it’s shaggier than most. Adapted from Borden Chase’s novel Blazing Guns On The Chisholm Trail (first serialized in The Saturday Evening Post), Red River sets up one major confrontation that never pays off, and works toward a seemingly inevitable ending that, at the last moment, suddenly becomes less than inevitable. Yet Hawks somehow makes both elements seem less like problems or sloppy writing than like the unpredictability of life intruding on its characters’ world. After all, sometimes a trip to Missouri gets sidetracked and turned into a trip to Abilene, as it does for Red River’s characters.

And even though the film has a set trajectory as it follows a cattle drive from South Texas to more lucrative markets up north, the characters’ passions—for duty and for each other—push the film. Wayne plays Thomas Dunson, who, as Red River opens, leaves a California wagon train to stake a claim in Texas. He promises he’ll send for the woman he loves (Coleen Gray), but loses her in a Comanche attack. The following day, Dunson and his longtime partner Groot (Walter Brennan) come across Matt, a young survivor of the raid. Together, they form a makeshift family. As the film quickly moves forward in time, they turn their ranch into one of the largest in Texas, only to see it endangered by the collapse of Southern markets in the aftermath of the Civil War. Yet for as much as the war takes from Dunson, it also returns Matt (played as an adult by Montgomery Clift) to him after his military service. But Dunson isn’t prepared to deal with his adopted son as a man with notions of his own.

This becomes increasingly apparent as they make their way north and Dunson reveals that having a leader’s personality and charisma doesn’t always mean he makes the right choices. As calamity and hardship set in, and morale dips, Dunson responds by taking a firmer hand with his men, meting out punishments disproportionate to the crimes, refusing sleep, letting alcohol cloud his judgment, and assuring that Matt will soon have to make a hard choice.

Hawks directs the film with his typical assurance and seeming lack of fuss, letting scenes play out in long takes, and framing the action against vistas that often dwarf the actors. He lets the clash between men—and, by extension, generations—play out against the unforgiving beauty of the American West, but there’s no danger of myth and symbolism overwhelming the drama, thanks to Wayne and Clift’s performances. The leads keep the film rooted in their characters’ needs. Dunson wants control and respect; Matt wants recognition and independence without losing the only family he’s ever known. Their understanding goes deeper than words, but their connection also makes their dispute much more dangerous. Though their conflict becomes high drama, it’s borne of quiet moments and hesitations that foreshadow rebellion. Wayne takes his character into darker and darker territory as the film progresses, paving the way for the more complex performances of his subsequent films. He’s forceful and assured from start to finish, moving with a determination that makes even the cattle get out of his way. Clift smartly underplays. He asserts himself not through force, but by standing his ground. He’s not one to be herded.

Hawks’ film focuses on how men relate to one another, and not just Dunson and Matt. Matt develops a rivalry with fellow cowboy Cherry Valance (John Ireland) that the film lets fizzle, but not before a homoerotic scene in which they try out each other’s guns. Brennan plays Groot as an old coot, and mostly serves as comic relief, except in the moments when it becomes clear how much his fatherly approval means to both Dunson and Matt. There’s a lot going on in the margins, too, and it sometimes spills out into the main action, as some of the other cowboys make it clear they’ll follow orders and honor their commitments, but not past the point where they can trust the man in charge. Duty is a fine word to throw around for those who don’t have to follow it up by working beyond the breaking point, eating reduced rations, and drinking what passes for coffee when the real coffee runs out.

Women stay out of the picture almost entirely until relatively deep in the film, when Joanne Dru arrives as Tess Millay, an independent woman on her way to work in a Nevada dancehall, which doesn’t stop her from falling for Matt. She’s a late-arriving Hawks heroine: tough, assertive, able to hold her own against men, unafraid of peril, and deeply in love with the hero, even if she’s reluctant to show it. Though Red River has long been hailed as a classic, that’s often in spite of Tess, not because of her. (“It is only in its few scenes involving women that it goes wrong,” Roger Ebert wrote of the film in 1998.) Yet as unlikely as her role is in the film’s final scene, which features a miraculous change of heart spurred by her impassioned speech, Tess’ presence still feels right at the end of a tale of generational strife and retribution. After spending two hours in a big, beautiful, but unfailingly harsh world, Hawks ends the film with the suggestion of gentler possibilities. It’s a Hollywood ending that doesn’t play like a cop-out, so much as an unexpected moment of grace.

This new Criterion edition, the first Criterion edition of any Hawks film, is a fine example of how many short features can be just as satisfying as a few longer ones. Spread out over two DVDs and two Blu-rays, the Criterion Red River features two cuts of the film: a longer pre-release cut that became the version most often seen on television and in home-video incarnations of the film, and the shorter, theatrical cut Hawks preferred. Yet, as Peter Bogdanovich explains in an affectionate filmed interview, neither is really the definitive Red River, as the pre-release cut had a longer ending, which Hawks preferred, but which he had to change for legal reasons. (It’s a complicated story involving Howard Hughes and a bit of self-plagiarism.) Bogdanovich also provides a revealing 1972 interview with Hawks, who’s characteristically gruff and far happier to talk about production details than artistry.

Also included: a vintage interview with Chase, who didn’t always get along with Hawks, and new interviews with critic Molly Haskell, who offers sharp insights into how Red River fits into the whole of Hawks’ career, and Lee Clark Mitchell, who’s similarly sharp in talking about how it fits into the Western genre. Finally, there’s a radio adaptation of the film, with Wayne, Dru, and Brennan all reprising their roles. It compresses the action into a mere hour—complete with Hollywood news and plugs for Lux Toilet Soap—yet even without the benefit of Hawks’ stunning visuals, it remains an enthralling story of lives under stress.