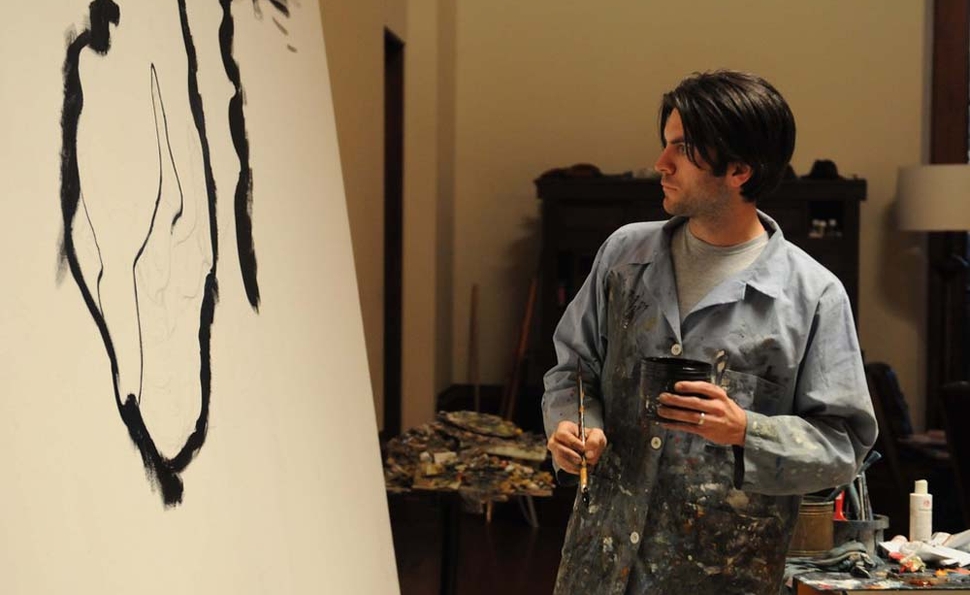 A creative’s life doesn’t often align neatly with the rest of the world’s timetable. For some, the hours of 9 to 5 are just numbers on the clock, weeks never really “end,” and leisure time may be appreciated, but not aggressively sought after. Painters, musicians, actors, designers, and so forth who aspire to be among the best in their field must have a near-obsessive mentality about creating their work, which can alienate them from just about everyone they come into contact with.

In The Time Being, by first-time Canadian director Nenad Cicin-Sain, struggling painter Daniel (Wes Bentley) can’t sell enough of his work to live comfortably with his wife Olivia (Ahna O’Reilly) and son Marco (Aiden Lovekamp). While Olivia supports his endeavor, it’s clear from the start that her patience is wearing thin: As the two get dressed for his art show, Daniel in the bedroom and Olivia in the adjoining bathroom, he half-jokingly asks her if she will buy one of his paintings if no one else does. “I love you, you know?” she chuckles, but a few moments later, she’s gazing soberly at her reflection in the mirror.

This brief exchange occurs as the camera pans between the two separate rooms, echoing the horizontal motion of a pendulum clock. The film goes on to suggest a few times more via visual and audible cues that time is slipping away, leaving no one behind.

Daniel stretches his family’s patience to the limit when he comes under the wing of a mysterious benefactor named Warner Dax, played by Frank Langella. He hopes Warner will commission him to make more art, but the aging man has little interest in Daniel’s talents as a painter; instead, he asks him to film random locations at specified times of the day, and leaves Daniel completely in the dark about the purpose of these strange, borderline-creepy tasks. Spending less and less time with Olivia and Marco, Daniel becomes immersed in Warner’s enigmatic, solitary world, hoping to figure out the true motive behind his assignments.

The Time Being is a visual pleasure, with Cicin-Sain unveiling shot after shot of glorious landscapes and striking silhouettes. A long shot of Daniel standing at the edge of a turquoise body of water with tall, golden-toned grass behind him and a vast, blue-white sky above is just one of many examples of the film’s aesthetic grandeur. More often than not, the still moments of contemplation—and there are quite a few—look practically indistinguishable from an oil painting.

As co-writer, along with Richard N. Gladstein, Cicin-Sain also shows promise. Many films about artists attempt to wring drama from the pathos of their protagonists struggling for their art and/or aspiring toward creative validation from their peers (Lust For Life, Pollock), and The Time Being touches on these aspects briefly. But the script is more interested in the difficult choices artists face in order to satisfy themselves and the ones they love, the ones who view the art world from the outside. Daniel wants to have it all—a successful art career and ample time and money to spend on his family—and hopes that Warner will be the one to lead him to that satisfaction.

It’s a shame, then, that Bentley’s performance as Daniel isn’t more fully engaged. Most of the film is spent with Daniel, letting the audience discover new clues about Warner’s plans and past as he does. But Bentley remains an empty canvas, offering little but expressionless eyes and bland interactions. When Daniel’s art dealer Eric (Corey Stoll) explains that he’s having trouble selling his artwork, Daniel nods and looks away, registering his expected disappointment as a blank stare. And while this is a nadir for the character, it’s impossible to distinguish his reaction from other scenes with lower stakes, where he appears as a similarly bored tabula rasa. Bentley internalizes his character’s weary state to the point that the actor doesn’t feel fully present onscreen.  Though he has far less screen time, the 75-year-old Langella carries most of the dramatic weight, embodying Warner as a gruff but ultimately sympathetic old man.

“Don’t you think a man has to do exactly what he has to do in order to feed his family?” Warner bluntly asks when Daniel hesitates to accept another odd filming assignment. Once the conclusions Warner has drawn from this notion become clear, it will be difficult for some viewers to see his decisions as anything other than a selfish choice. But at least The Time Being attempts to confront that dilemma in the first place.