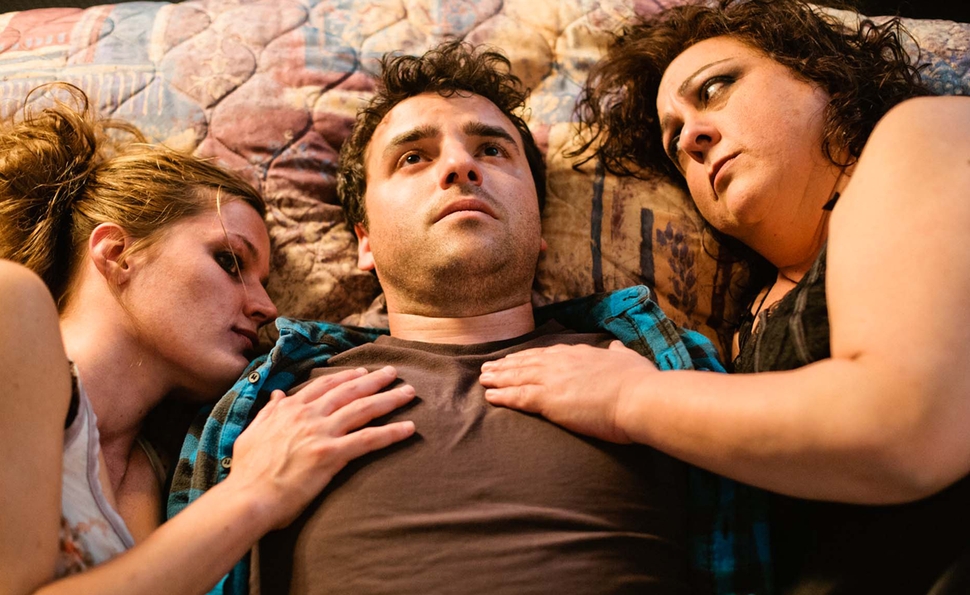 Unexceptional schlub Andrew (David Krumholtz) is hurting over his mother’s death from cancer. Ostensibly in need of company to help with the grieving process, he invites two of his best friends and their girlfriends for a vacation week out around the Twentynine Palms patch of California desert. There, in front of his plainly unhappy girlfriend Hannah (Melanie Lynskey), Andrew clears his throat with a mealy-mouthed, vague plea for sympathy (“I’m still trying to deal with the fact that my mom is gone and that I never really got to make my peace with everything”), then makes a request that doesn’t follow: For morale-raising purposes, he would like to have a foursome with his girlfriend and his friend’s partners.

There are sex-advice columnists whose job is to help people with relatively unconventional desires figure out how to achieve them while being mindful and considerate of all parties’ best interests. In this movie’s universe, Andrew is apparently unaware of them, or just doesn’t care: He’s an emotionally oblivious self-starter. From the beginning, The Big Ask is hampered by its dunderheaded lead, who’s blithely convinced that his buddies will step in and convince their girlfriends to do the right thing (i.e., him). His friend Dave (Zachary Knighton) isn’t having it, and in a typically thudding line, he explains why: “We’re all on the verge of a nervous breakdown. It’s called life.”

Predictably, Andrew’s request precipitates relationship crises all around. Dave has proposed to his girlfriend Zoe (Ahna O’Reilly), but she’s left him hanging without an answer, while friend Owen (Jason Ritter) has the barely concealed hots for Hannah. Hannah, meanwhile, is masochistically devoted: “I am going to deal with this,” she declares. “It’s my job.” (It really isn’t, though the movie seems to end up stating that Andrew is indeed rightly her unpleasant burden.) Who’ll stay together and who’ll split? The Big Ask seeks to answer this question through a not particularly inspired series of dialogues and group talks.  All the characters remain largely static, worrying about the same problems over and over—none more so than Andrew, whose obdurate persistence and belief he’ll get his way with enough whining is instantly tiresome.

Black comic relief is miscalculated, notably in the introduction of two prostitutes Andrew’s friends hire to let him have a threesome; he shrieks that they’re unattractive and won’t do, marking the end of that interlude. More substantively, writer/co-director Thomas Beatty has his dad Ned on hand as a colorful old coot (he’s billed as “Old Man Carl”) who shows up in search of his lost dog. Unfortunately, the canine is confiscated by Andrew, and turned into a metaphorical mirror he can use to come to terms with himself. “You’re a dick,” he seethes at the innocent animal. Men are dogs!

All the cast members are competent or better, with top honors going to Lynskey, adding to her gallery of long-suffering girlfriends and wives (a role honed in The Informant! and Helena From The Wedding, among others). But there’s little sense that these people are friends for any reason besides the script saying so, and the contrasts between the three relationships produce no real insight in this hollow, irritating drama.