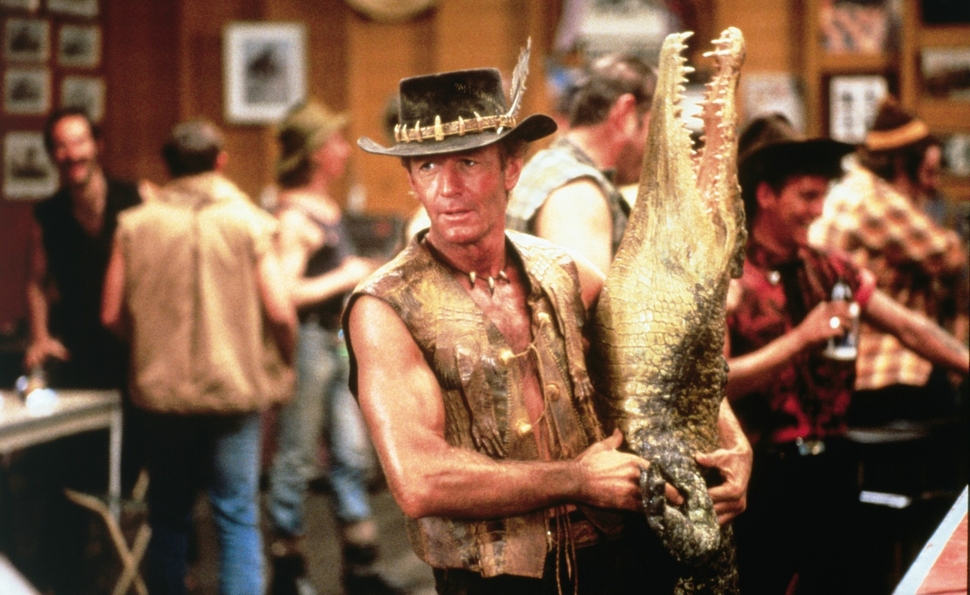 It would be difficult to imagine a zeitgeist-capturing pop-culture phenomenon with lower stakes than the 1986 smash Crocodile Dundee. What happens in the Oscar-nominated (for Best Original Screenplay) film, ultimately? Foxy American reporter Sue Charlton (Linda Kozlowski) travels to Australia to do a story on eccentric backwoods legend “Crocodile Dundee” (Paul Hogan). She bonds with him, then takes him back to New York with her. He wanders about for a few days, makes some friends, and comically/unconvincingly misunderstands certain American customs before Sue decides that she wants to be with him instead of her snobby, obnoxious current boss/boyfriend. The end. Yet thanks to an instantly iconic hero, some eminently quotable dialogue about identifying and defining knives (it has to do with size, apparently), and a whole lot of campy Australian local color, Crocodile Dundee became the biggest smash in Australian history, and made such an imprint on international audiences that the film’s hero came to symbolize an entire continent.

Crocodile Dundee doesn’t have much use for a plot as anything more than a rough framework for creaky—though largely effective—culture-clash gags. Yet the film transforms its almost negligible wisp of a plot, and casual, laid-back tone into assets. It’s an unhurried film, content simply to let its lovable hero loose in New York, then watch the genial hijinks as he tries to acclimate himself to a pre-Giuliani Big Apple. The filmmakers are savvy enough not to clutter a simple, winning formula.

In the role that launched him to international superstardom, Hogan plays Dundee as both an outback folk hero renowned for his way with crocodiles (and, it should be noted, his unfortunate propensity for poaching crocodiles) and something of a charlatan, a good-natured fraud who can’t help but embellish his legend at every turn. In perhaps the only sly gag in a comedy without much use for understatement, Dundee shaves with a plastic razor, then sees Sue approaching and quickly, seamlessly swaps the tiny razor out for a giant, manly machete, since it’s a little more in keeping with his self-styled image as the ultimate survivalist.

Sue begins to fall for this walking encyclopedia of Australian clichés and stereotypes before they ever leave the outback for the urban jungle of New York, where Dundee, despite his many decades hanging out in roughneck bars getting drunk with loose woman, is surprised and amused to encounter such hitherto unknown oddities as cross-dressers, homosexuals, and cocaine. And bidets.

The jokes in Crocodile Dundee are so mothballed, they could all be recycled from a 1930s Bowery Boys vehicle where the boys help out a tourist from Australia, but Hogan sells them with a performance rich in easygoing charm. There’s an element of self-deprecation to Hogan’s performance—a winking, grinning acknowledgment of the character’s absurdity that nicely undercuts the macho fantasy. And he’s blessed with such strong onscreen chemistry with his female lead that it’s not surprising that he and Kozlowski became an item in real life.

The film’s innate likability carries it through periodic rough patches, even if this slight but winning trifle left the characters—and by extension the franchise—nowhere to go. Really, there’s barely enough incident in Crocodile Dundee to fuel a ten-minute sketch, let alone a cinematic trilogy. But no movie that made as much money as Crocodile Dundee did could go without a sequel, and so two years after the film conquered the world, the character returned in 1988’s abysmal and joyless Crocodile Dundee II, which was released to scathing reviews but still grossed a fortune solely on the public’s enduring affection for its characters.

The default strategy for arbitrary sequels is to give audiences what they loved about the first film, in much greater doses. Crocodile Dundee II boldly if idiotically pursues the opposite approach, deliberately eschewing what made the original special—culture clash comedy, a laid-back tone, and the strong chemistry between Hogan and Kozlowski, who are separated for big chunks of this film—in favor of an unexpected and wholly unwelcome influx of globe-trotting action.

The sequel begins with Dundee now living in New York with Sue and feeling mildly flummoxed by some of the more complicated intricacies of American life and culture. But mostly the character just seems bored and directionless before Sue is abducted by the minions of a foppish Columbian drug lord, who believe her photographer ex-husband sent her footage of the kingpin committing crimes.

Dundee leaves the country to try to save Sue and eventually the reunited couple face off against a generic South American drug cartel in the Australian outback. The diamond and/or drug-smuggling subplot was ubiquitous in high-concept comedies of the 1980s and 1990s, finding its most idiotic expression in 1994’s hilariously misguided Anne Rice adaptation Exit To Eden, which combines light BDSM and sitcom comedy with a diamond-smuggling scheeme. Crocodile Dundee II doesn’t just have a cocaine-smuggling subplot; it has a cocaine-smuggling plot. The idiocy involving Dundee and his girlfriend fighting the Columbian cocaine cartel swallows up a movie that seldom even attempts to be funny, and consequently never is.

None. The movies, now united on a two-for-one Blu-ray, are all the special feature necessary.