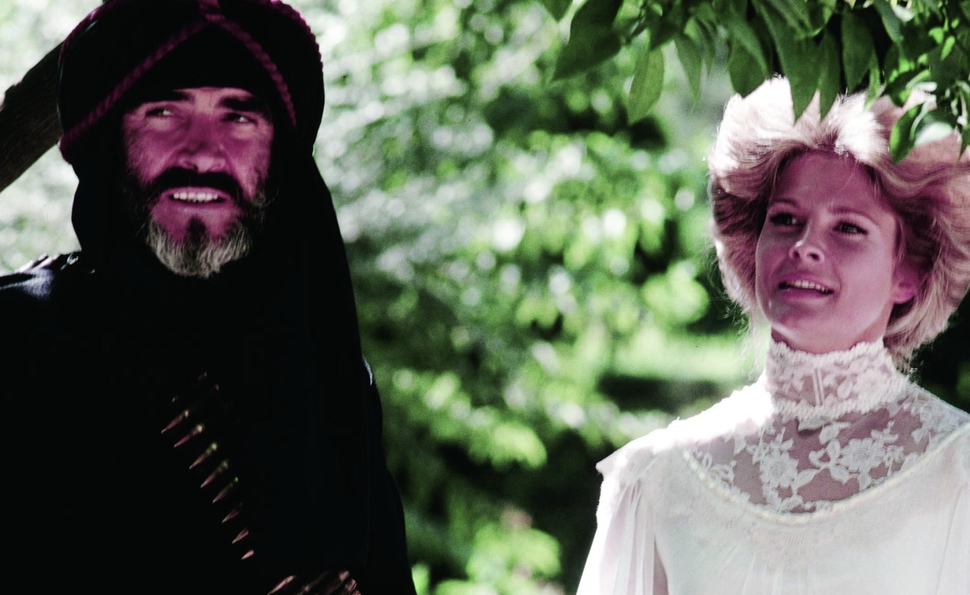 The Wind And The Lion

In Milius, Joey Figueroa and Zak Knutson’s fine 2013 documentary about the tumultuous career of writer-director John Milius—friend to Francis Ford Coppola, Steven Spielberg, and George Lucas, and the man responsible for the screenplay of Apocalypse Now and directorial efforts such as Conan The Barbarian and Red Dawn—Harrison Ford refers to The Wind And The Lion as “a crazy movie.” On the surface, that’s a bit of an exaggeration. In many respects, The Wind And The Lion is a historical epic in the tradition of those made by David Lean, whose work Milius has cited as an influence on the film. (It even uses some sets left over from Lawrence Of Arabia.) What’s more, the detail Ford singles out, the casting of Scotland’s Sean Connery as Berber tribal leader Mulai Ahmed Er Raisuli, wasn’t viewed as that crazy in the 1970s, even if it does result in curious line readings like “Our swords will run with the blood of infidelsh.” Even the ways the movie veers from the historical record don’t seem that crazy. It was inspired by a real-life 1904 incident in which Raisuli made international news by kidnapping Ion Perdicaris, a man of Greek and American descent, and his stepson and holding them for ransom. In The Wind And The Lion, Ion becomes Eden Pedecaris (Candice Bergen), a mother of two, and the American reaction switches from saber-rattling to the firing of shots, both of which seem like reasonable embellishments in the interest of juicing up the drama.

The real craziness of The Wind And The Lion, and the qualities that make it such a striking film, come from Milius, who stuffs what looks like a familiar adventure story with observations about power, America, and leadership, and somehow makes them feel like a natural fit to the material. Connery’s Raisuli doesn’t share any scenes with Theodore Roosevelt (as played from the grin out by Brian Keith), but Roosevelt, not Eden, is his real antagonist. Informed of the kidnapping by Secretary Of State John Hay (John Huston), Roosevelt sees in the crisis an opportunity that might serve him well in the middle of an election year. Much of the film contrasts the machinations of Raisuli and Roosevelt, both of whom have to struggle to keep a grip on power, even if only one does so by gripping a sword.

The structure allows Milius’ script to ruminate; in the film’s most famous moment, Roosevelt explains why the grizzly, not the bald eagle, should the “symbol of the American character,” because of its “strength, intelligence, ferocity” and because it’s “a little blind and reckless at times, but courageous beyond all doubt.” Keith’s delivery makes it clear that Roosevelt admires both the courageousness and the recklessness. So does the film, which treats the U.S. military’s later storming of a Moroccan palace as a bit of grand derring-do, the necessary action of an imperial power. (Though it’s punctuated with some grim humor.) A self-described hawk, Milius made the 1975 film at the moment when the general public ought to have been least receptive to this sort of sentiment. Yet the film’s boisterous spirit, and rousing Jerry Goldsmith score, does a lot to cut through any complaints.

The careful balancing of the screenplay helps, too. Milius idolized Roosevelt, and made him the subject of two projects—the TV miniseries Rough Riders followed in 1997—yet here, he treats Raisuli and Roosevelt as equals, portraying them as larger-than-life heroes who double as canny manipulators. The Wind And The Lion is a neat mixture of romanticization and realpolitik, sweeping in its action scenes and smart in the way it shows how, even at the dawn of the 20th century, a small handful of determined men with guns could affect international politics, and how the leaders of large nations could use the actions of those men to make bold moves in the interest of national security. The film is memorable for its action scenes—from an opening raid that erupts on an eerily quiet day through a Sam Peckinpah-inspired finale—but also for the reflective moments from which those action scenes are born.

Elsewhere, the balance isn’t quite right, however. Keith and Huston are extraordinary, but Connery and Bergen regularly bump up against the limitations of their acting ranges. Whenever the focus shifts to the relationship between Raisuli and Pedecaris, the film grows less confident, and less compelling. Milius altered history to make room for a female protagonist, but doesn’t know what to do with her, apart from letting her give an appalled Raisuli the occasional dressing-down. The film wouldn’t work without portraying Pedecaris and her children’s slow absorption into Raisuli’s band of tribesmen, yet that isn’t the real story here, so much as the clash between two men at opposite sides of the world, both with keen senses of right and wrong and the drive to reshape the world to enforce them. Milius lets this long-distance confrontation play out on a grand scale, and with a great deal of sensitivity to both opponents. It’s a gross oversimplification to treat history as resulting from the actions of great men, but for movies, the approach can work beautifully.

This nice-looking Blu-ray edition ports over features from the 2004 DVD, which include an informative commentary from Milius and a short, dull, making-of feature from 1975 that’s mostly just behind-the-scenes production footage.

GoWatchIt: Buy. Rent. Stream The Wind And The Lion