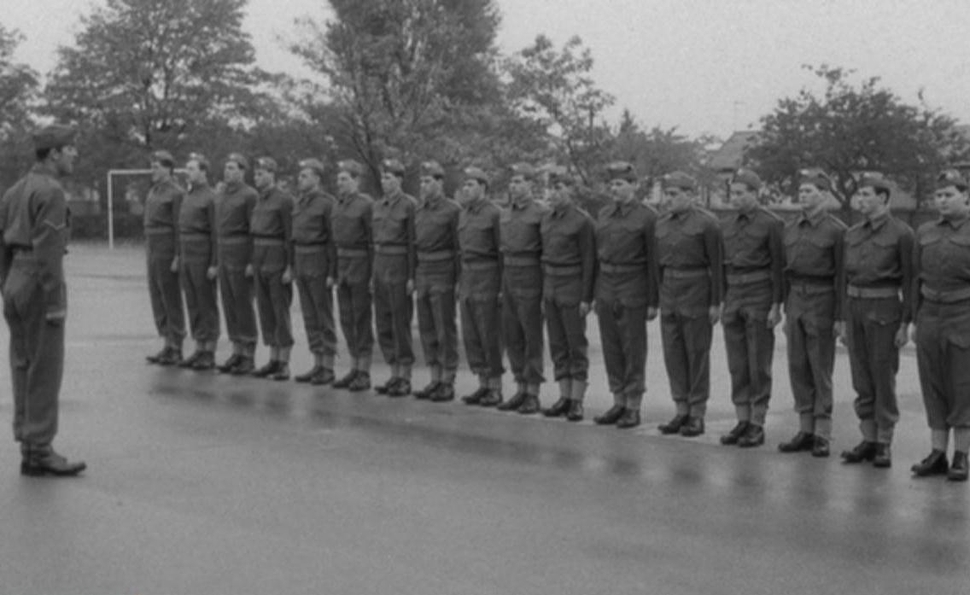 War movies have existed as long as movies have existed, but World War II was the first real “movie war,” with armies of cameramen shooting footage on the various fronts, while back home, even larger hordes of filmmakers were cranking out propaganda pieces, action pictures, and wartime melodramas. Looking back, what stands out is how different that documentary material looks from what the studios were producing during the war. At the time, James Agee’s columns of movie criticism in Time and The Nation raved about the moving images coming from overseas, calling it some of the most historically important footage ever shot. Agee was prescient. Today, seeing these first-person views of bombing runs and ground combat is like watching dispatches from an alien world.

Stuart Cooper’s experimental 1975 film Overlord makes great use of that alien quality. Cooper had access to the film archives of London’s Imperial War Museum, and worked the archival footage into an original story, with Brian Stirner playing Tom, a British soldier-in-training for “Operation Overlord,” a.k.a. the D-Day invasion of Normandy. The new material was shot in black and white by Stanley Kubrick’s frequent cinematographer John Alcott, and edited by Jonathan Gili so it matches fairly seamlessly with the actual wartime films. After World War II, as Hollywood became more permissive about depicting violence onscreen, war movies grew more realistic, and began aping some of the images the war correspondents shot. (The first half-hour of Saving Private Ryan, for example, looks like a direct copy of some of the old D-Day films.) But Overlord’s vision of war is still unlike that of any other fiction feature: more jarring, and more awe-inspiring.

At the time Overlord was made, there was something of a craze for turning old movie clips into original films, sometimes in polished packages like That’s Entertainment!, and sometimes in arty productions like the Beatles-themed All This And World War II. Overlord got a little lost in that shuffle, and was hampered as well by a general lack of interest among mid-1970s moviegoers for war stories and documentaries. The film found a second life by airing on the cinephile-friendly Los Angeles cable station Z Channel, which led to the raves of Overlord fans in Xan Cassavetes’ 2004 documentary Z Channel: A Magnificent Obsession, and then to a proper theatrical re-release for Overlord in 2006.

It’s appropriate in a way that a movie made from little-seen footage from decades earlier would itself be little-seen until decades later. But that was never Cooper’s intention. Overlord is an unusual film, but it’s not obscure by design. It tells a fairly old-fashioned war story, about a young man who joins the cause, and grows up in the process. Between the documentary clips of bombed-out cities and soldiers in training, Cooper tracks Tom as he settles into his unit, learns the ropes, meets a girl… the usual. On a narrative level, the major difference between Overlord and an actual 1940s war movie is that Tom is also haunted by premonitions of his own death, and the overall point of the movie is that even the most idealistic, unique individuals will get ground up in the great war machine.

Yet Overlord also acknowledges the inherent contradictions of its own point of view. The movie’s arc leads viewers to the conclusion that war is a terrible waste, but Cooper doesn’t skimp on the shots early on of Nazi planes attempting to level London, which is the sort of aggression that demands a response. Nor does Cooper shy away from footage that looks thrilling, and even beautiful. From the images of enormous tanks with weird flailing attachments to the shots of pilots bailing out of exploding jets, Overlord strings together the kind of gasp-inducing footage that would be hard for even the most imaginative filmmaker to draw up from scratch. Just as soldiers get fed through the military combine, so in Overlord they become like spectacular blobs of ink, for an artist to splatter stunningly across a ravaged canvas.

On its own, Overlord is an effective film, but a mysterious one. Where did these clips come from? How did Cooper get permission to use them? How did he put it all together? The Criterion Blu-ray bonus features (carried over from an earlier DVD edition) put Cooper and Overlord in context, with the help of an earlier Cooper short film, “A Test Of Violence,” in which he re-created images from the work of painter Juan Genovés; and via a short documentary about the Imperial War Museum and how it worked with Cooper to comb its archives. The most useful extra, though, is a commentary track by Stirner and Cooper (recorded separately), in which Cooper points out some structural choices that are invisible to the naked eye, such as his decision to put the archival material in chronological order, rather than taking a useful shot from May of 1944 and sticking it in a scene set in March. Cooper felt it subtly enhanced the realism to use only date-appropriate material. It’s hard to argue with the results.