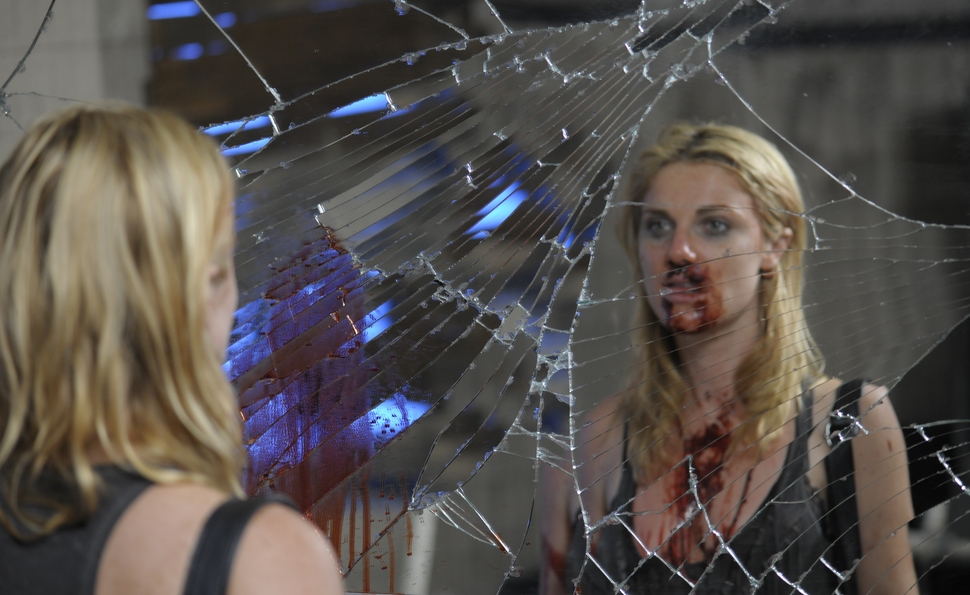 Titillation comes first, horror comes later—and in the same old tired, fright-free, shaky-cam form—in SX_Tape, whose standout idea is to spell its title in the most inane way possible. Little more than a feature-length variation on the opening segment of season two of FX’s American Horror Story (except with characters even more in need of butchering than Adam Levine’s cam-cording thrill-seeker), Bernard Rose’s contribution to the disreputable found-footage subgenre is for the most part a one-woman show for Jill (Caitlyn Folley), whose boyfriend Adam (Ian Duncan) is constantly filming her. Jill is an aspiring artist whose paintings of nude women with two faces both speak to her sexual candor, and foreshadow her evil dual nature. That latter fact might technically qualify as a spoiler, but the film telegraphs its every move 10 minutes in advance, and relies on jolt scares for the bulk of its surprises.

As the introductory police interrogation video of Jill makes clear, the relationship concludes with Adam’s death. First, though, the budding videographer spends plenty of time taping himself and Jill having sex in her apartment, a clothing-store dressing room, and a car. Things get kinkier when the two stumble upon an abandoned hospital where, according to Adam, “naughty” women used to be committed for having abortions. It’s a locale that both agree would be a perfect venue for one of Jill’s art shows. So they break in, ooh and aah at the spooky medical equipment and abandoned kids’ toys, then strap Jill onto a filthy table for more on-camera sex. Unfortunately, that last bit of fun happens right after Adam leaves Jill alone for a few minutes, and she’s accosted—cue the camera’s footage going schizo-blurry and screechy!—by a female ghost.

Rose’s faux-vérité aesthetics are no more or less assured than the average Paranormal Activity knock-off, providing lots of unsteady vantage points on poorly lit corridors and grungy basements. Like the extremely similar Grave Encounters, SX_Tape spends long stretches meandering through its run-down environment in the misbegotten hope that suggestions of past mental-ward atrocities—walls stained with blood, examination tables tipped over onto their sides—will make up for the fact that nothing much is actually happening, save for the sight of these two grating ciphers wandering around in circles.

Two of Jill’s friends eventually factor into the action as a means of further amplifying the story’s sexual element (they, too, are really, really horny) and to function as victims for the eventual supernatural mayhem. Yet despite Rose’s fixation on the act of filming sex, and a central location whose history involves women being punished for sexual indiscretions, SX_Tape has nothing to say about voyeurism, power dynamics, or issues of female exploitation and abuse. Instead, Rose’s film is just another formulaic found-footage throwaway, notable only for its wannabe-porno sensationalism, replete with a climactic money shot that’s simultaneously graphic and underwhelming.