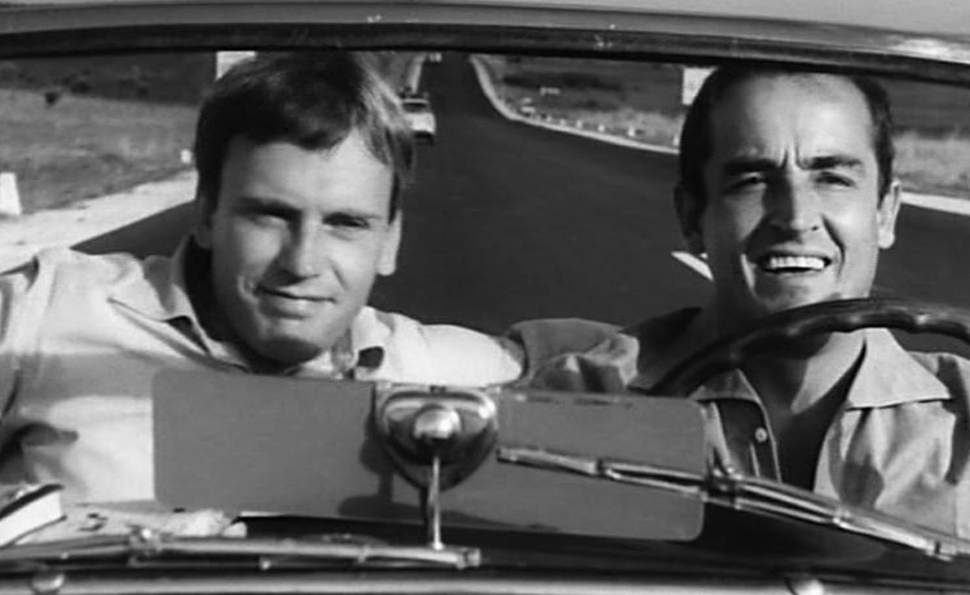 In Dino Risi’s intoxicating road comedy Il Sorpasso, Bruno, the irrepressible force of nature played by Vittorio Gassman, professes his philosophy of living his life one day at a time. The evidence here implies he hasn’t planned nearly that far ahead. His actions are impulsive and spontaneous, a minute-by-minute act of improvisation that often seems to lack sensitivity to the people around him. The road movie is the perfect way to accommodate a character like Bruno, because it keeps him from being boxed in by any one setting, or more structured forms of comedy or drama—or so it appears, anyway. Bruno and Il Sorpasso are full of wonderful surprises and hidden depths, and they continually slip away from any attempts to reduce them. They’re both larger than life, unmistakably Italian in their richness, exuberance, and bravado.

A prime example of Commedia all’Italiana, the popular Italian comedy tradition that flourished during the country’s economic boom—a movement that lasted from the late 1950s to the early 1970s—Il Sorpasso was the biggest hit of 1962, and it’s easy to see why. Gassman’s performance is part of it, with Bruno serving as a gregarious guide on the road from Rome to Tuscany, but Italian audiences also had the pleasure of seeing themselves onscreen, thanks to Risi’s interest in picking up bits of local color at every stop. It’s tempting to think about Commedia all’Italiana as simply a light, populist response to grimmer post-war assessments of neo-realism, but films like Il Sorpasso suggest more of a complementary counterbalance, taking just as keen an interest in how ordinary people live, while embedding social commentary in broad entertainment.

Il Sorpasso uses a classic odd-couple setup as the catalyst for a funny, disarming portrait of male friendship. With Gassman sucking up most of the oxygen as Bruno, Jean-Louis Trintignant plays the shy, bookish straight-man to perfection. The two meet on an August morning when the streets of Rome are virtually empty, and Bruno, desperate to make a phone call, beckons Trintignant’s Roberto to help him out. Roberto has plans to stay in his apartment and continue his studies in administrative law, but the middle-aged Bruno insists that this young stranger come along with him for a drink. And just like that, Bruno sweeps up Roberto like a tornado and drives them both out of the city in his convertible, careening at top speed to destinations unknown. They drive past (and through) a couple of eateries, pursue a pair of attractive German tourists to a cemetery, visit Roberto’s relatives, and eventually wind up in a place where Roberto learns the tolls of Bruno’s exciting life.

Though Il Sorpasso belongs to Gassman, whose character casts himself as the lead in the traveling road show that is his life, Trintignant serves as a fine audience surrogate, perhaps because he often plays the audience to Bruno’s relentless charm offensive. His Roberto gets so few words in edgewise, in fact, that Risi conveys most of his thoughts through inserts of voiceover narration, which generally find Roberto reacting with the alternating horror, amusement, and affection that Bruno inspires through the film. There’s pleasure enough in watching Bruno terrorize other drivers by laying on the horn and offering hilarious bits of running commentary—he dismisses Michelangelo Antonioni’s L’Eclisse as dull, but really admires his car—but the film doesn’t leave it at that. Bruno is more perceptive about Roberto than he seems, and his life is more complicated than his seat-of-the-pants approach to it implies.

None of this is to say that Il Sorpasso turns dark, or loses all the buoyancy that makes it so appealing from the start. Risi just begins, slowly and elegantly, to introduce complications to this wild, sun-dappled journey, especially once pieces of Bruno’s past come to light. Bruno represents a carefree, dynamic new Italy, but one that hasn’t (and can’t) leave its traditions behind without consequence. Il Sorpasso is sprinkled with social commentary, but the film is so breathlessly entertaining that it’s less noticed than absorbed.

Director Alexander Payne offers a thoughtful introduction to the film, which was an influence on his own road comedy Sideways. Other special features include two new interviews: Co-writer Ettore Scola gives some context on the beginnings of Commedia all’Italiana, Risi’s determination to offer a fuller picture of life and not belabor his points, and his feeling that Bruno’s tendency to belittle everything is part of his bourgeois nature. Film scholar Rémi Fournier Lanzoni goes even deeper into the history of Commedia all’Italiana, how Bruno represents the “art of getting by,” and the film’s ability to incorporate the daily lives of ordinary Italians. A couple of short documentaries round out the set, including “A Beautiful Vacation,” an affectionate tribute to Risi for the director’s 90th birthday, and “Speaking With Gassman,” a 2005 film by Risi’s son that gets into his difficult but productive collaboration with Gassman.