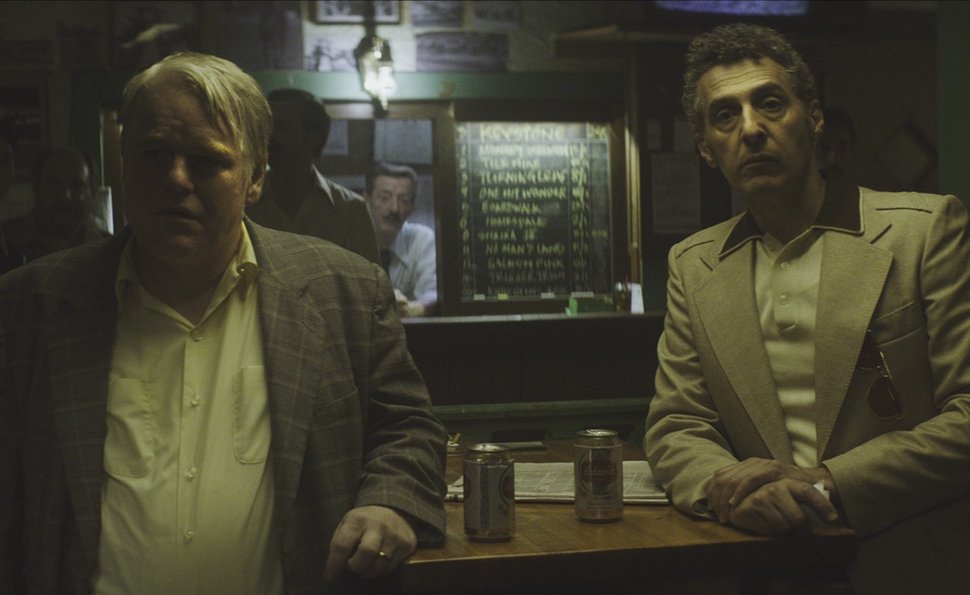 It’s no longer clear how backhanded a compliment it is to say that a movie resembles the pilot episode for a potentially terrific TV show. Co-written and directed by Mad Men’s John Slattery, God’s Pocket was adapted from Peter Dexter’s first novel, published in 1983 and inspired, at least in part, by Dexter’s own violent history in the South Philadelphia neighborhood of Schuylkill (known as Devil’s Pocket in real life). But the film is neither particularly literary (despite occasional florid voiceover from a character who’s a writer) nor especially cinematic, and it doesn’t fully work as a stand-alone narrative. What it offers, in spades, is a precise, evocative sense of time and place, deftly suggesting a shared history among the colorful denizens of a vividly realized milieu. Its haphazardness is part of its grubby charm, and would seem unremarkable were this merely an introduction; only the knowledge that there's no more to come makes it unsatisfying. For better and worse, God's Pocket ends just when it feels as if it’s getting started.

By sad chance, that feeling of interruption now extends to lead actor Philip Seymour Hoffman, who had just returned from this film’s Sundance première when he died in February 2014. He plays Mickey Scarpato, a small-time criminal who, along with his buddy Bird (John Turturro), resells sides of beef they steal from trucks, with the drivers’ collusion. Early on, Mickey’s walking nightmare of a stepson, Leon (Caleb Landry Jones), is killed while threatening a co-worker with a switchblade; everyone present tells the police it was an accident, but Leon’s mother, Jeanie (Christina Hendricks), senses that something else went down. Mickey promises to look into it, but this winds up as merely a pretext for a series of darkly comic, sometimes frankly brutal escapades involving unpaid debts, clashes with the funeral director (Eddie Marsan) handling Leon’s service, and an alcoholic newspaper columnist, Richard Shellburn (Richard Jenkins), who’s ostensibly also investigating Leon’s death, but mostly just wants to get into Jeanie’s pants.

God’s Pocket wasn’t particularly well-received at Sundance (though The Dissolve’s Noel Murray liked it pretty well), and one of the most common complaints was that its characters are underdeveloped. In one sense, that’s true—nobody, not even Mickey, has much of a traditional arc, and defining moments are all but nonexistent. Because the actors are uniformly strong, though, and because the neighborhood itself provides such a credible context, Slattery manages to create the impression of an immense backstory that informs every interaction, making any sketchiness seem like naturalism rather than a failure of imagination. Only Jeanie, whose response to Richard’s attentions is entirely nonverbal and largely opaque, risks coming across as a cipher; everyone else hustles with delectable gusto, as if they’re just too busy living to conveniently reveal themselves in full right off the bat. The surface ripples imply volumes underneath.

Managing the source material’s tricky shifts in tone proves more difficult for Slattery. Scenes of violence unfold in such a casual, matter-of-fact way that they cross the line into absurdist comedy, but they’re so inconsistent with the rest of the film that it’s unclear whether that was intended. (Even if it was, one of them, in which two borderline psychopaths get taken out by the least likely person imaginable, plays as way too cute.) Clumsy cross-cutting between sex and an impending accident likewise reveals an uncertainty at the helm regarding how to integrate the various strands of Dexter’s story. Such macroscopic flaws are forgivable, though, in a movie that gets so many of the tiny details right. “I don't see nothin’ but meat when I’m lookin’ at meat,” a butcher tells Mickey. Then he instantly freaks out when he finds Leon’s corpse in the back of Mickey’s truck. In this case, it’s much more enjoyable to look at the meat and let more troubling matters slide.