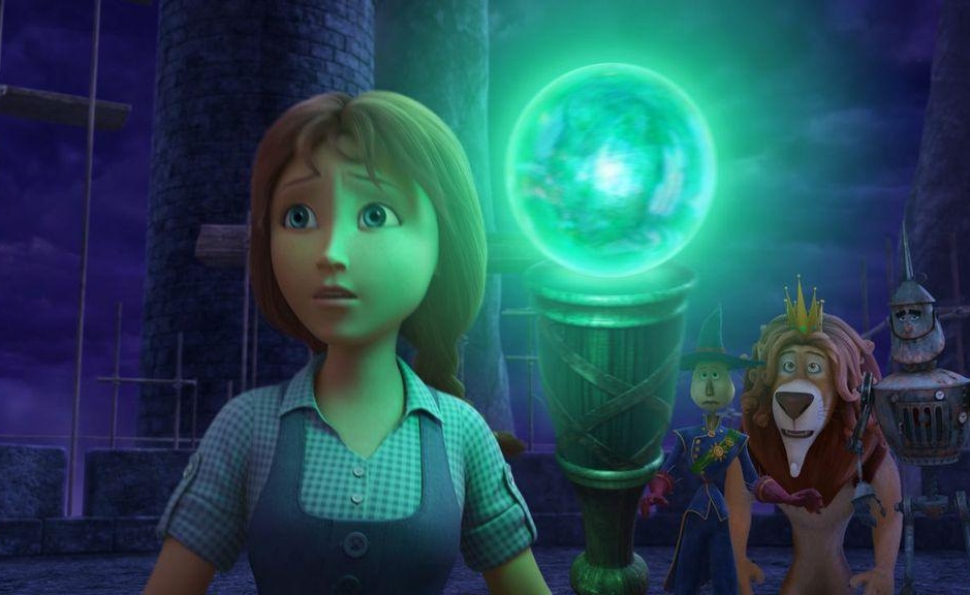 The B-team is out in full force in the dreadful new 3-D computer-animated feature Legends Of Oz: Dorothy’s Return, both in front of the camera and behind. Dorothy Gale, The Cowardly Lion, The Tin Man, and Scarecrow are all back, but this time around, they’re joined by Marshal Mallow (Hugh Dancy), a marshal made of marshmallows (hence the name); Wiser (Oliver Platt), an overly chatty, dangerously obese owl with addiction issues; an ancient, sentient boat named Tugg The Tuggboat (Patrick Stewart); and a tiny, delicate China Princess (Megan Hilty). These additions feel like the kiddie-movie equivalent of Dukes Of Hazzard subbing in scab cousins Coy and Vance for a season when the actors playing Bo and Luke walked out over contract disputes: a desperate, transparent attempt to replace the genuine article with a bogus imitation.

It isn’t just the additions that are sorely lacking: The familiar faces are equally devoid of inspiration, even though the filmmakers assembled the hottest voice talents of 1986, including Dan Aykroyd, Bernadette Peters, Martin Short, Jim Belushi, and Kelsey Grammer. Aykroyd voices The Scarecrow as a nasal, grating know-it-all, a terrible choice he sticks with. Grammer originally gives The Tin Man Frasier Crane’s plummy voice and effete personality, and Jim Belushi makes the now confident, assertive Lion (who gained his nerve back in Wizard Of Oz, do recall) into a sassy, television-commercial cross between Fabio and Tony The Tiger. Even Dorothy, as voiced by Glee’s Lea Michele, has lost what made her original and distinctive in earlier versions. She’s all sugar and sweetness here, with none of the steely strength Judy Garland lent her, or any of the dazzling eccentricity Fairuza Balk brought to the role in 1985’s Return To Oz.

Adapted from Dorothy Of Oz, a book by L. Frank Baum’s great-grandson Roger Stanton Baum, the film takes place after the events of The Wizard Of Oz, at a point when Oz has fallen into disrepair. The Wicked Witch of the West has been vanquished via strategic water-hurling, but a new menace has arrived in her place—The Jester (Martin Short), the Wicked Witch’s brother, and a sort of off-brand version of The Joker.

As the film’s primary villain, Short delivers a performance of migraine-inducing volume. He yells every line as if trying to breathe life and inspiration into the film through furious effort alone. His performance is predictably exhausting, in part because Short is operating in such a vacuum. Like his sister, The Jester has flying-monkey henchmen at his disposal, and when a movie can’t make flying-monkey henchmen even a little cool, something has gone terribly awry—though with Legends Of Oz, it’s more accurate to say that everything is completely awry.

Dorothy is dispatched to save Oz, and over the course of her adventures, she acquires the entourage she hopes will let her finally defeat The Jester and restore order to Oz. It helps that everywhere she goes, she’s recognized as a great witch-slayer and a hero, which makes her quest a lot easier.

The film’s lineage and story provides a wonderful opportunity for world-building, as Dorothy and her fanciful companions travel from one far-fetched, whimsical land to another, but the film’s backgrounds have the bland, pretty emptiness of computer screensavers. The character design and animation hearken back to the uncanny valley that plagued early attempts at computer animation; the humans of Legends Of Oz don’t look particularly human, but they don’t look like anything else, either. They move with a stiffness that similarly feels like an anachronistic throwback to computer animation’s distant past.

The Wizard Of Oz and Walter Murch’s underrated Return To Oz are nightmare-inducing in their darkness and weirdness, but the best Legends Of Oz can manage is to be shrill and unpleasant. The best children’s films have a tendency to both traumatize and amaze, but Legends Of Oz does neither. It’s simply tacky consumer product that dishonors the famous name in its title—the same one that’s keeping this film from the direct-to-video burial it deserves.