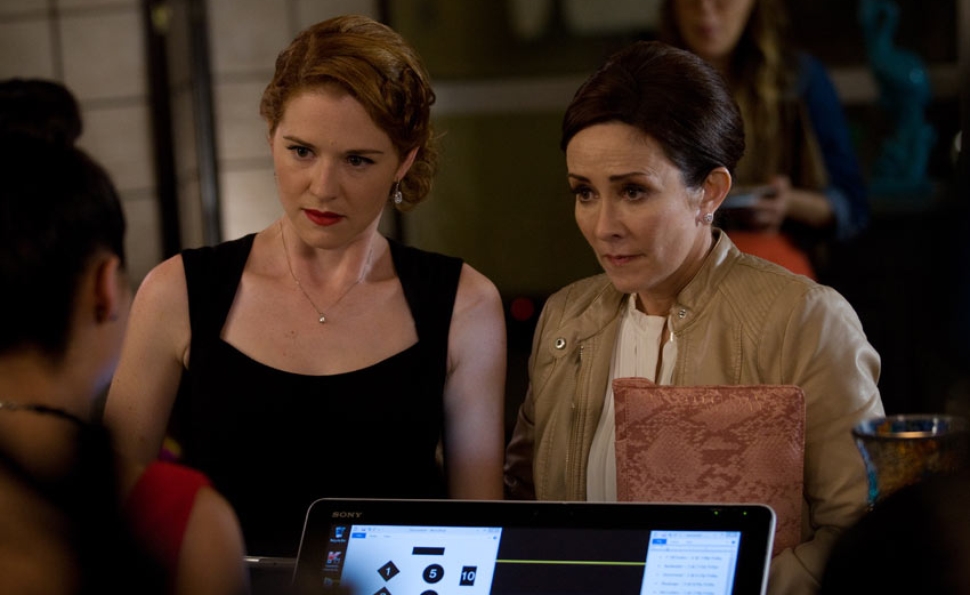 Aspiring “mommy blogger” Allyson (Sarah Drew) narrates Moms’ Night Out in a digressive, stream-of-consciousness ramble and with a tense, barely controlled hysteria that suggests the character might snap and take a machine gun to a schoolyard, if she weren’t anchoring a Christian family film. Buried deep, deep within Moms’ Night Out is a raw, cathartic, revealing psychodrama about the soul-shredding pressure of being a mother in contemporary society. But that version of the film is in absolutely no danger of escaping; it would just complicate the film’s pat messages about faith and the importance of family.

Allyson is a mommy on the verge of a nervous breakdown, just barely holding it together in the face of the inhuman stress she faces every day as a teacher, mother, and wife. She needs a break—a night out, as it were—but Moms’ Night Out instead sends her and her vanilla cohorts for a walk on the mild side, as they encounter such exotic (to Christian family audiences, at least) creatures as tattoo artists, bikers, and people who look and act like they regularly smoke marijuana cigarettes, even though it’s illegal.

The genial shenanigans begin when Allyson gets her loving, supportive, slightly clueless husband (Sean Astin) to look after the kids so she can enjoy a child-free evening. She gets dressed up and heads to dinner with friends Izzy (Logan White) and Sondra (Patricia Heaton), the seemingly perfectly put-together wife of a beloved pastor (Alex Kendrick, a doughy, pasty middle-aged man who is nevertheless a Christian superstar, thanks to his participation in the smashes Courageous and Fireproof).

The titular evening of maternal escapism begins to go awry when the moms’ dinner reservation at an upscale New Age restaurant turns out to be for a different weekend, and they discover, to their horror, that a baby has gone missing. The search for the infant sends these mothers out into a shadowy but thoroughly PG nighttime world of slackers, no-goodniks, ne’er-do-wells, a British cabbie suspiciously invested in the stars’ plights, and young men who look like they have been playing what Allyson refers to as those dastardly “death videogames” and drinking alcohol, instead of listening to their pastors’ wise counsel. Still, it periodically steps away from this family-friendly parade of kooks so Heaton, who also executive-produced the film as part of her ongoing crusade to liberate entertainment from ungodly heathens, can deliver life lessons on Christ’s compassion to her grateful protégé Allyson.

This comedy is never afraid to preach the gospel, but the sermonizing comes second to its good-natured but seldom successful hunt for mild chuckles. It’s a cleaned-up variation on movies like Date Night and Adventures In Babysitting, which were pretty cleaned-up and family-friendly already, albeit without the explicit references to Jesus that serve as dog whistles to the faithful. Moms’ Night Out is purposefully un-hip, but that doesn’t keep it from trying to keep up with the times in ways that are so painfully, unconvincingly of the moment that they already feel dated. It’s as if the screenwriters pieced together the specific details of their film from a Google search for “young-people words,” and turned up such seemingly contemporary-sounding results as “blog,” “Groupon,” “Coachella,” “Auto-correct,” “Pinterest,” and “Gangnam Style.”

Drew’s likable but overly caffeinated performance lends the film a certain manic energy, and country singer Trace Adkins gives a nicely understated performance as “Bones,” a tattooed biker-type whose grizzled exterior hides the warm heart of the church boy he used to be. The film benefits from the low standards that typically greet faith-based movies, which are seldom expected to be good, just Christian. Moms’ Night Out inherently preaches to the choir, but it’s understated enough that at various times, it could pass for a hokey television movie from the 1980s, the kind that might star Pam Dawber, or a pre-divorce Meredith Baxter-Birney. It’s a passable knock-off of less-godly but more inspired secular fare, which may not sound like high praise, but is clearly all the filmmakers were aiming for. They set the bar low enough to clear it.