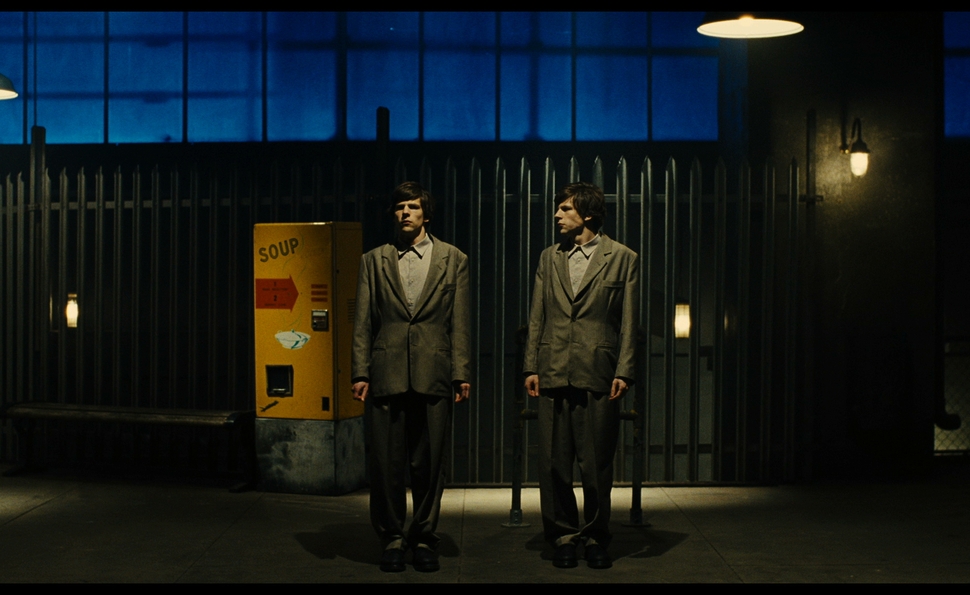 Jesse Eisenberg alternately swaggers and sulks his way through a remarkable dual performance in The Double as, respectively, a sneering, egomaniacal asshole who behaves as if the universe owes him a standing ovation for every moment he’s alive, and a meek little shell of a man whose every gesture, word, and idea is a sincere but insufficient apology for his existence. The performance brilliantly harnesses both sides of Eisenberg’s persona: the painfully earnest nice guy with the little-boy quiver in his voice (like Michael Cera, Eisenberg habitually looks like he wants to fold his lanky body up into a tiny little ball, then disappear) and the arrogant prick who wields sarcasm like a deadly weapon against people he considers beneath him, which is pretty much everybody. That second, sinister side to Eisenberg’s acting found its purest expression in his Oscar-nominated performance as evil genius Mark Zuckerberg in The Social Network, and it bodes well for his upcoming performance as Lex Luthor in the upcoming Batman Vs. Superman film. Eisenberg excels at playing sheep-like innocents, but he may be even better at playing total bastards, and The Double affords him an unusual opportunity to play both roles to the best of his capabilities.

In the early going, though, The Double limits Eisenberg to the role of Simon, a sad-sack who lurches through a dystopian world that combines the worst elements of the past. The architecture resurrects the soul-killing industrial ugliness of Eastern Bloc buildings of the 1940s and 1950s. The television preserves the worst aspect of 1970s cheese, and the computers where Simon and his coworkers ply their trade have the homey, retro bulkiness of personal computers from the early 1980s, before they worked out many of the kinks.

Simon leads a life so devoid of meaningful achievement that he’s habitually unable to convince his coworkers, doormen, and neighbors that he exists in any meaningful way. He has a physical form—he wears clothes, and has a job—but as far as the world is concerned, Simon is forever in the wrong place at the wrong time, a nobody in a nothing world.

Then one day, Simon is introduced to James (Eisenberg again), the new employee at his job, who happens to look exactly like him. Where life is one long, brutal, personal rejection for Simon, it’s all green lights for James, who takes what he wants without bothering to ask. Where Simon desperately, poignantly pines for Hannah (Mia Wasikowska), the fragile beauty who lives across from him, James seduces her instantly, while making time on his busy schedule for his retinue of other lovers, which extends to every halfway-attractive woman he meets.

Simon and James form what could charitably be called a friendship of convenience, if a man as singularly selfish as James were capable of friendship. James exploits his resemblance to Simon to get out of doing work and taking tests, and James’ irrepressible lust for life and ruthless pursuit of his needs briefly makes Simon’s life seem almost worth living, before their strange alliance ends badly, and these unlikely allies become more understandable enemies.

Character actor and television veteran Richard Ayoade made a striking debut with Submarine, a lovely, elegant little coming-of-age movie that channeled the French New Wave by way of Wes Anderson. The Double is similarly rooted in pop culture’s past: Though the film adapts a Dostoyevsky novella, it seems equally rooted in the grim, post-industrial dystopias of George Orwell’s 1984 and particularly Terry Gilliam’s Brazil, which it resembles in tone, theme, and look—and pretty much every way one film can resemble another, including matching its finely tuned, Monty Python-esque sense of absurdity.

Ayoade’s tremendous debt to Brazil extends to a tone of icy, deadpan tragicomedy; The Double is a profoundly cold film, arctic even, about a brutal world and its luckless, innately doomed inhabitants. But the desperate vulnerability Eisenberg brings to Simon and Wasikowska brings to Hannah lend it a human dimension, and Eisenberg’s darkly comic performance as James gives it a manic, lively kick.

Like many films inspired by Brazil, The Double is a masterpiece of production design, where every detail of its grim universe is realized down to its tiniest detail. Ayoade has built an imaginative, immersive world out of largely secondhand parts, but he holds his characters at a pronounced distance. Yet despite this detachment, The Double is sneakily powerful almost in spite of itself. Beneath all The Double’s cynicism, misanthropy, intense stylization, and distance lies a core of genuine tragedy, and that’s what gives the film an emotional resonance beyond its aesthetic achievements.