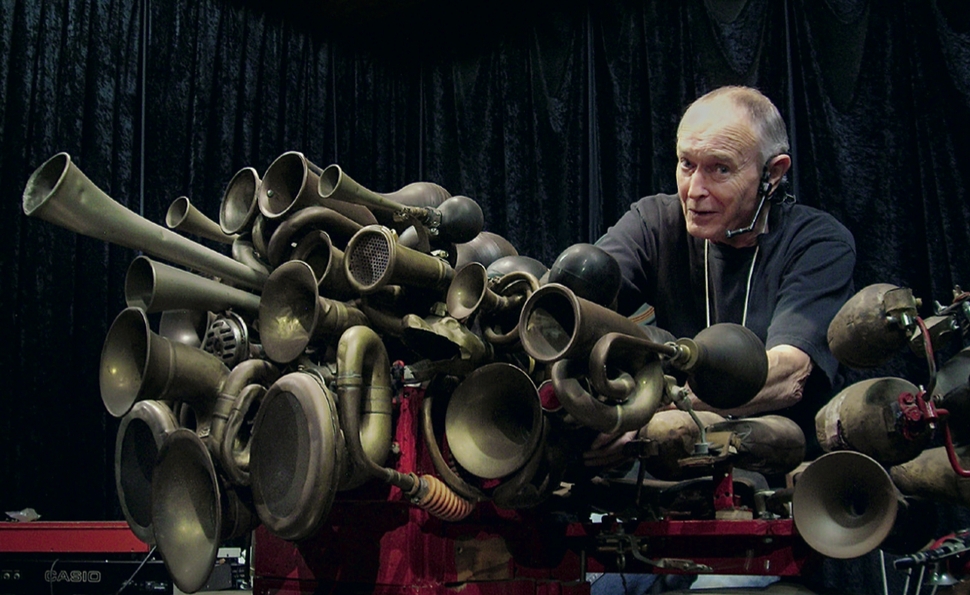 Mortality—and more specifically, the fear of dying unheralded and unrecognized—hangs over the documentary Llyn Foulkes: One Man Band like a swollen thundercloud the color of a bruise. For this anxious portrait of the artist as an old man, co-directors/editors Tamar Halpern and Chris Quilty spent time between 2004 and 2012 with iconoclastic Los Angeles painter and singer-songwriter Llyn Foulkes, whom they identify on their film’s poster as “The most famous artist you’ve never heard of.” They frame their movie (pun intended) around two paintings he drove himself to the brink of madness trying to complete. The textured, three-dimensional landscape “The Lost Frontier,” which he prepares to ship to New York for an exhibition in the early part of the film, occupied him for eight years, during which he continually “re-edited” the work, often with a chainsaw. (Halpern and Quilty also made a separate 20-minute short film devoted exclusively to “The Lost Frontier.”) The more intimate bedroom scene “The Awakening” cost him even more: “My marriage was falling apart, and I was trying to solve it in a painting,” he reflects.

Foulkes, it becomes clear, isn’t easy to live with. His two ex-wives and his two daughters are among the talking-head cast heard praising/cursing his artistic integrity/self-sabotaging stubbornness, along with curators, gallery owners, and a cigar-waving Dennis Hopper, who died in 2010. But Halpern and Quilty give the overwhelming majority of their picture’s 89-minute screen time to Foulkes himself. Unlike their other interview subjects, Foulkes is almost always in motion as he speaks, flitting around his studio at the Los Angeles Brewery artists’ colony, or anxiously greeting well-wishers at openings, imploring them with his eyes to please buy something. (“Did you see the big one in the next room?”) The photographic glimpses of his almost shockingly handsome younger self (he’s 70 when the documentary begins) project a confidence that seems at odds with the restless man seen now. One of those old photos is a black-and-white portrait of Foulkes sitting beneath an awning that says “The MODEL,” taken by Hopper. “He was a model of the future to me,” Hopper explains.

Foulkes enjoyed fame and critical attention almost immediately upon dropping out of Los Angeles’ Chouinard Art Institute in 1959. But in the ensuing decades, he slipped into obscurity by refusing to duplicate his popular successes (particularly his rocky landscape paintings of the 1960s, and the “bloody head” portraits he turned to in the ’70s) or “play the game,” as he puts it, of flattery and glad-handing required for longevity in an increasingly corporatized art market.

That may sound like a self-serving self-assessment, but others echo it. Art In America corresponding editor Michael Duncan and gallery owner Doug Walla shake their heads at Foulkes’ continual, violent tinkering with paintings that Duncan liked and Walla felt he could have sold many times over. “The only way it’s finished is when they take it away from me,” Foulkes says ruefully, sounding something like his fellow fan-alienating tinkerer George Lucas. “It’s like your life: It’s never finished!”

Foulkes’ long-simmering anger over having not received his due doesn’t endear him to the art-world power brokers best positioned to help him, but it does make him an uncommonly forthcoming, unguarded interview. Andy Warhol was a hack, famous for a Campbell’s soup can “that took him half an hour to paint, that anyone could paint, because it’s nothing.” Walt Disney was a right-wing Republican and an anti-communist who named names, Foulkes says, explaining why Mickey Mouse appears in so many of his paintings (including “The Lost Frontier”) as a sinister presence. He volunteers that the buyer of his 1991 painting “Double Trouble” tried to return it after she learned the petrified fetus affixed to it was real. Foulkes refused to refund her money. “If she’s got a problem with real fetuses, that’s her problem,” he shrugs.

Indeed, Llyn Foulkes: One Man Band might be too bitter to sit through, if it wasn’t enlivened by a soundtrack of songs composed and performed by Foulkes himself on “The Machine,” a custom-built contraption the size of a small Toyota that combines horns, percussion instruments, xylophone parts, and heaven only knows what else. His songs are equal parts Tom Waits and Tom Lehrer in their childlike whimsy and darkness. In junior high in the 1940s, Foulkes idolized Spike Jones, the bandleader who specialized in satirical, sound effects-enhanced arrangements of popular hits. The influence is still audible in his work. Foulkes’ habit of introducing his own solos during musical performances with a spirited “Take it away, boys!” suggests he still knows his way around a joke, even if it’s been decades since he felt like making one.