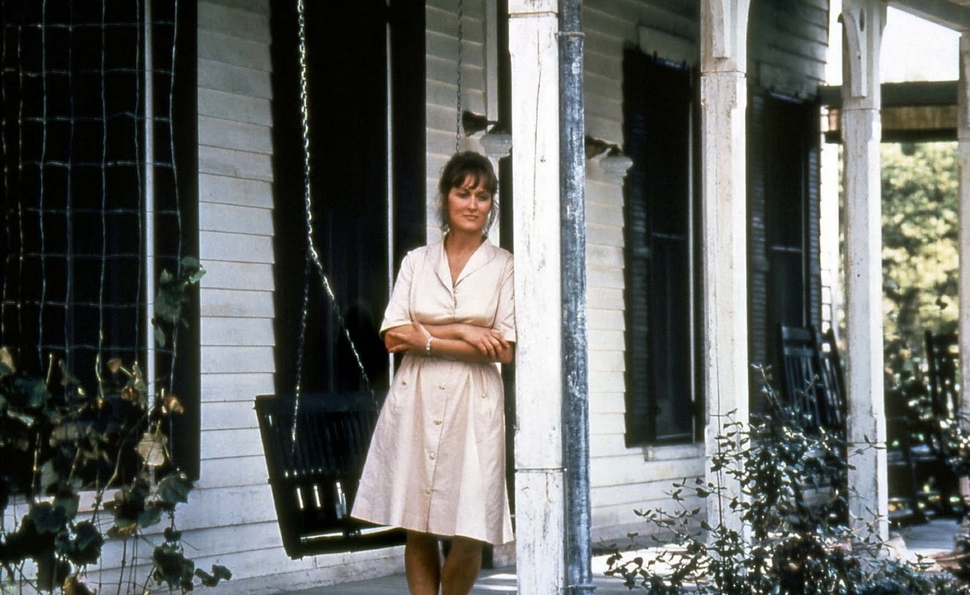 The Bridges Of Madison County

There’s an old truism that it’s easier to make a great movie from a mediocre book than to make even a good movie from a masterpiece. That may explain the wonderful alchemy that occurred when director Clint Eastwood and screenwriter Richard LaGravenese adapted Robert James Waller’s bestselling romance novel The Bridges Of Madison County in 1995. On the page, Waller’s story comes across as sappy and under-baked, sending an idealized version of manhood (reportedly based on Waller himself) into rural Iowa, where he touches the life (and body) of a lonely Italian immigrant. On the screen, with Eastwood playing worldly National Geographic photographer Robert Kincaid and Meryl Streep playing farmer’s wife Francesca Johnson, The Bridges Of Madison County blooms. Eastwood and LaGravenese adopt the rough form of classic movie melodramas like Brief Encounter or All That Heaven Allows, but render the clichés so realistically that the ache runs deeper.

What’s especially remarkable about the movie version of The Bridges Of Madison County is that Eastwood and LaGravenese didn’t substantially alter the source material. Eastwood originally planned only to play Kincaid, and not to direct the film. But when the first director, Bruce Beresford, commissioned a new script that Eastwood and his co-producer Kathleen Kennedy felt strayed too far from the book, Eastwood stepped in, and returned to LaGravenese’s more faithful draft.

The biggest change LaGravenese made to Waller’s novel was to modify the book’s framing device. The movie opens with Francesca’s grown children returning to the family farm after she dies, and discovering a cache of mementos of Robert Kincaid, along with three journals written by Francesca to her kids, explaining the four-day affair she had with the photographer back in the 1960s. LaGravenese’s structure lets Eastwood vary the tone of The Bridges Of Madison County by periodically returning to the present day to show how Francesca’s story is affecting her son and daughter, who are each having their own marital troubles. Otherwise, the movie follows the novel’s plot, with Robert rolling into Madison County to photograph the bridges, and developing an instant rapport with the woman who gives him directions.

The Bridges Of Madison County’s faithfulness works against it only when Francesca and Robert begin to realize their whirlwind romance has to end, because Francesca’s husband and children are due to return from their trip to the state fair. When the emotion boils over, and Francesca is yelling at Robert for being so cool and rootless—while Robert is guilt-tripping Francesca for not being willing to run away with him—the film comes closest to feeling forced and phony. But that’s mainly because Eastwood and LaGravenese (and Streep, for that matter) excel elsewhere at making the movie’s more contrived moments feel natural.

A lot of that has to do with the location. Shot mostly in Iowa, using the real bridges and an actual farmhouse, the movie picks up the textures of real life without even needing to try particularly hard. Eastwood and cinematographer Jack Green don’t make the images overly stylized or lush; instead, they get that the power of this story is in the way it plays out in a creaky old pickup truck, and in a kitchen stocked with mismatched ceramic butter dishes and embroidered dish-towels. The Bridges Of Madison County is about the sensuality of the everyday: the sweat of an Iowa summer, the taste of a cold soda from a steel cooler, the sensation of drinking a glass of beer while soaking in a bathtub, and so on. Eastwood and Green’s simple approach pays off with the movie’s most emotionally devastating scene, where Francesca sits in her husband’s truck in the pouring rain, and hesitantly reaches for the door, thinking hard about running after Robert.

Eastwood and his longtime editor Joel Cox also pace The Bridges Of Madison County masterfully, letting the scenes of Francesca alone on the farm play out with long silences, and letting the scenes between Francesca and Robert build slowly and casually. The effect of all of these choices is that it’s easier to see how Francesca could get swept up in the moment. And Streep rises to the challenge of holding the center of the screen for the bulk of a 135-minute movie. When she’s talking with Robert, Streep’s Francesca is funny and refreshingly honest, with an eruptive laugh that convulses her whole body. When Francesca is by herself, Streep is able to convey with just a glance toward the window or the road that she’s thinking about Robert, feeling giddy and irritable knowing he’s out there in the world as a physical presence, not just a fantasy.

At one point in the movie, Robert describes his job for National Geographic as making sure his pictures are in focus, with “not too much personal comment,” which may seem like a fair description of Eastwood’s style. Except that there’s actually a lot of personal feeling in The Bridges Of Madison County, and not just in Streep’s performance, or from Eastwood loading up the soundtrack with dreamy old torch songs. The strength of Eastwood’s Bridges is in its patience, and how it lets the love story develop from start to finish, even though the audience knows from the beginning the broad strokes of what’s going to happen. That savoring of every moment between Robert and Francesca makes it all the more agonizing when Francesca gets a phone call or a visit from a neighbor, eating away at the too-brief time she has left with her soulmate. In a lot of ways, The Bridges Of Madison County is about how time can tick away, right when people most need it to stand still.

The new Bridges Of Madison County Blu-ray edition looks and sounds terrific, and that sound mix matters a lot, since the film is dominated by long quiet stretches, punctuated by beautiful music. The disc adds a commentary track by Green and Cox, who give insiders’ view of Eastwood’s methods, which he tends not to talk about much himself. The Blu-ray also contains an informative behind-the-scenes featurette, including interviews with all the cast members and major creative personnel. Streep comes off the best in these interviews. The actors who played Francesca’s grown children describe how she insisted on meeting them in person, so they would feel her character’s absence, and Streep praises Eastwood for excising his own “Oscar scenes” and going for something more understated. Streep then delivers one of the most cogent appreciations of the film when she jokingly complains that for all the dialogue in The Bridges Of Madison County, fans of the movie most remember the image of Francesca fiddling with that door handle. That’s the effect visual simplicity can have: making the smaller moments more indelible.