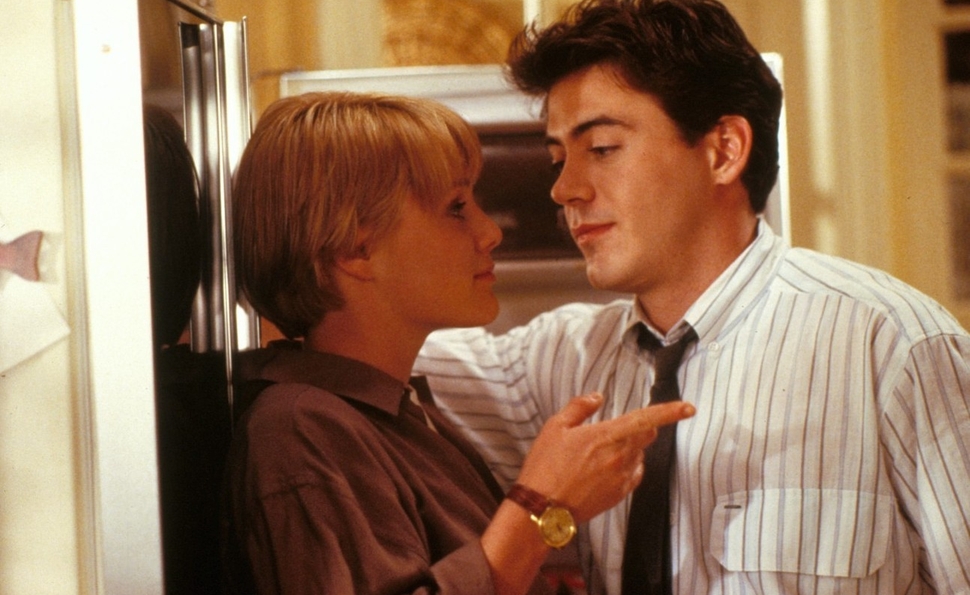 As a charming young man who is also the reincarnation of a charming dead man, a young Robert Downey Jr. faces unique acting challenges in the dizzy 1989 trifle Chances Are, which has just been released in the 25th-anniversary Blu-ray edition no one asked for. Like Michael J. Fox in the similar but infinitely more accomplished Back To The Future, Downey’s Alex Finch must fend off the sexual advances of someone he’s at least karmically related to, in this case Miranda (Mary Stuart Masterson), the hot-to-trot daughter of Louie Jeffries (Christopher McDonald), the man Alex used to be before he died 25 years earlier. Due to a slip-up in the afterlife, Alex was reincarnated inside the body of a man all too aware of his previous life as the beloved husband of Corinne (Cybill Shepherd) and the best friend of Philip (Ryan O’Neal). Alex must convince Corinne that he’s her reincarnated husband, but it’s more than Downey can tackle, not because the film is terrible, but because the premise is just too ridiculous even for his star power to sustain.

Emile Ardolino’s even-more-star-crossed follow-up to Dirty Dancing begins in the mid-1960s, with Louie marrying the adoring Corinne. Philip is also hopelessly in love with Corinne, but when Louie dies in an automobile accident before his daughter Miranda is born, Philip chivalrously decides to give Corinne nearly a quarter of a century to get over Louie’s death before cautiously putting the moves on her. His reluctance makes sense, however, since she still hasn’t moved on. In an uncharacteristically sweet, vulnerable performance, Shepherd plays Corinne as refusing to let go because she’s maintaining a strange, one-sided, but satisfying relationship. She feels Louie’s presence acutely; his memory is so strong and intoxicating that it sustains her. A living boyfriend would only be distracting.

Then one day, Alex, an ambitious young aspiring journalist, stumbles across Miranda and her family. In the family home, Alex is struck by a rare, intense feeling of déjà vu that quickly evolves into the unshakeable conviction that he has been there before, in his previous life as Louie Jeffries. Corinne is initially horrified by the handsome, charismatic young man who says he’s her reborn husband, but before long, she’s passionately embracing him as the impossible realization of her greatest desires. Downey and Shepherd have potent sexual chemistry, and while Chances Are is short on laughs, it’s long on romance. As a featherweight trifle rooted in young death, an endless mourning process, and quasi-incestuous stirrings, the film suffers from jarring tonal shifts on a continual basis.

In order for a film this preposterous and loopy to work, it requires deep, passionate commitment. (Think Joe Versus The Volcano, or the sublime, little-seen Nothing Lasts Forever.) It also requires more than a touch of the divine madness that colors Downey’s performance. But Chances Are suffers from a failure of nerve, especially during a final act that betrays the early scenes’ swooning romanticism, and gets bogged down with unnecessary subplots. (The script never really knows what to do with Miranda, other than to have her pine sexually for the reincarnation of the dad she never knew.) It also has magic even stupider than the body-switch-by-crossed-urine-streams gimmick in The Change-Up, which should be the gold standard.

Chances Are opens with images of old-school glamour, accompanied by the satiny beauty of Johnny Mathis singing the title song. It closes with Peter Cetera and Cher over-emoting on its terrible (yet Oscar-nominated) theme song “After All.” That shift represents the film in microcosm: What starts out sexy, old-fashioned, and full of promise and screwball sophistication ends as a sloppy exercise in 1980s cheese that not even Robert Downey Jr. can redeem.

This reincarnation of the film doesn't even have a trailer.