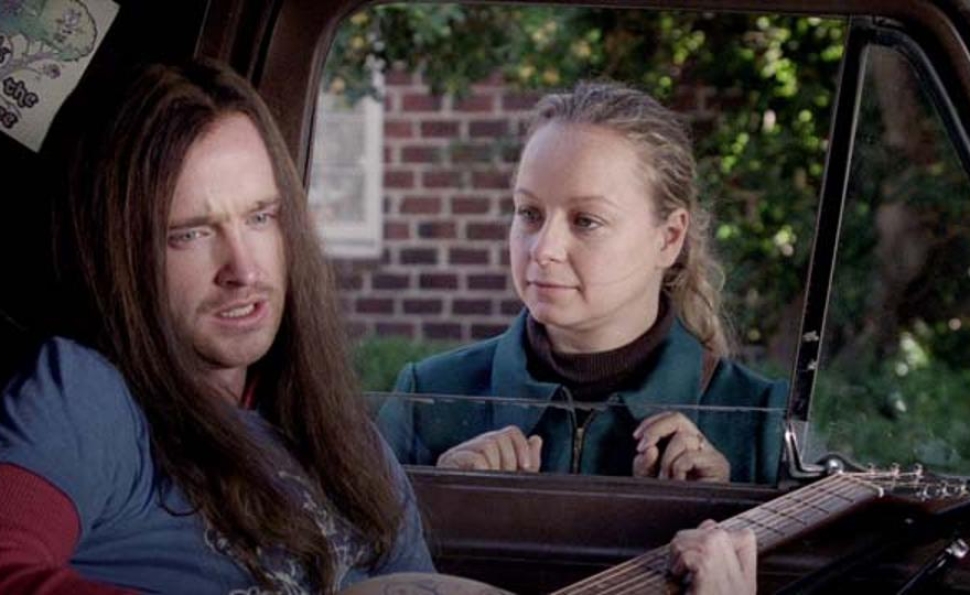 Seldom has a film equaled Decoding Annie Parker’s astonishingly wide gap between the altruism of a film’s message and the harm with which that message is conveyed. But this movie stretches across that awful chasm for every minute of its running time. Steven Bernstein’s wretched but well-intentioned biopic only comes to an end when those two sides have been pushed so far apart that the film can no longer suspend itself across the gorge between them.

Breast cancer is a terrible thing, and there’s no doubt that Decoding Annie Parker will be a revelatory experience for anyone who isn’t sure about that. Cancer is the second leading killer of females in America, and the best that can be said of Bernstein’s script (co-written by his son Adam and Michael Moss) is that it understands how a disease that ostensibly affects one person at a time can ripple through any number of lives, disintegrating families while invisibly uniting generations of women in a shared struggle. That idea informs the film’s clever, potentially poignant structure, which splits its attention between Annie Parker (Samantha Morton), whose life has been devoted to fighting breast cancer, and Mary-Claire King (a severely bored Helen Hunt), whose life has been defined by her attempts to cure it.

Annie Parker isn’t a celebrity. She doesn’t have a Wikipedia page. She’s simply one of the untold number of women who have felt as though cancer is “stalking” her family. The youngest member of a tight-knit Toronto family, Annie is 11 when her mother dies of cancer in fall 1976, becoming the first of the Parker girls to succumb. Annie’s older sister (Marley Shelton) discovers a lump in her breast less than a decade later, and quickly falls to the disease as well. Guided only by lay-logic, Annie begins to suspect she has a hereditary predisposition to the disease, though the old male doctors she consults insist the Parkers have merely been the victims of “bad luck.” Millions of lives are endangered and lost because the patriarchy refuses to entertain the anecdotal evidence of female patients.

Meanwhile, a prominent geneticist at UC-Berkeley is tirelessly working to isolate and prove the existence of the breast-cancer gene. In fact, Mary-Claire King and her loyal team of comely assistants (Ben McKenzie, Maggie Grace, etc.) don’t leave the lab at any point during the 14 years the film spans, as re-explaining their most basic findings to each other is apparently quite the full-time job. Their research is slow to yield results, and a woman dies of breast cancer every 12 minutes (as is indicated by a clock on King’s desk). Will they discover anything that validates Annie’s hunch before her time is up?

Cutting between the parallel stories, Decoding Annie Parker is exasperatingly slow to evolve into a misbegotten portrait of women helping women. The film flips between Annie and Mary-Claire with decreasing grace; each scene is more artificial than the last. The film reduces its namesake to the magical idiot of cancer cinema. Annie’s plot is augmented with memoir-like voiceover (“My life was a comedy—I just had to learn to laugh”), which consistently confuses a giggly childishness for endearing irreverence. When she reflects that she married her pool-cleaner husband (a woefully miscast Aaron Paul) because he had a great ass and made their bed go “thumpity-thump,” she’s supposed to sound wistfully self-actualized, but she sounds more like a horny Forrest Gump.

Annie’s fears, particularly her growing concern that she’s bound to feel a tumor one morning, resound with understandable honesty, which is easy to appreciate given how many movies use cancer as a plot device at the expense of confronting the horrors of its daily reality. On the other hand, the amateurish, glaringly artificial means by which Bernstein’s film depicts those realities strips them of their truth. Morton is a brilliant actress, but only her suffering seems believable here. An extended metaphor involving death escaping from a room in Annie’s house typifies how the film clings to its clumsiest ideas, which also include a number of dissociative jump-cuts, a distracting reliance on stock footage, and a parade of television actors whose recognizability is substituted for meaningful characterization.

It’s difficult to dramatize a historical development that the audience knows has come to pass, particularly when that subject isn’t an event (i.e. the passage of the Thirteenth Amendment in Lincoln), but rather a discovered piece of information, as it is here. The catastrophic tactlessness of Decoding Annie Parker highlights that challenge as few films have ever done before, particularly as Bernstein struggles to provide an arc to this story of stoic persistence. He makes no attempt to shape King’s story, and his solution to Annie’s portion is to depict her helplessness as a growing mania. Her marriage dissolves as she spends her days reading medical books with a young doctor (Corey Stoll), and her nights building wooden double-helix models in her kitchen.

However rooted in fact these developments might be, the mercilessly trite beats through which they unfold—and the speed at which those beats pile up—robs Annie’s ordeal of even the smallest kernel of truth. The extent of the damage only becomes clear during a moment toward the end of the film, when Annie is rocked by a simple acknowledgement of her perseverance. It’s a brief and all-too-rare glimpse into to how cancer battles keep sufferers from ever being truly alone, even in the most personal fight of their lives. Cross-cutting the story of a cancer victim who’s struggling to maintain her agency with the story of the woman who’s trying to cure her should compellingly enhance both threads, but Bernstein refuses to take advantage of his film’s structure and draw meaningful connections between the two. It’s as if creating recognizably human characters wouldn’t be worth risking the tepid catharsis of the film’s one successful scene.

There’s no doubt that the filmmakers had their hearts in the right place, but their film’s attempts to valorize Annie as a survivor are so labored and false that Decoding Annie Parker ultimately leaves viewers with the unfortunate suggestion that people who triumph over their cancer are somehow better than those who succumb. When the film’s most villainous character is quickly felled by colo-rectal cancer, her death smacks of karmic retribution. This hurtful notion is the direct byproduct of incompetent storytelling, but lack of intention doesn’t make the implication any less difficult to stomach.

A feel-good story gone horribly awry, Decoding Annie Parker is hard to watch and even harder to remember. The $2 million that went into it would have been much better spent building upon King’s discoveries and working toward a cure.