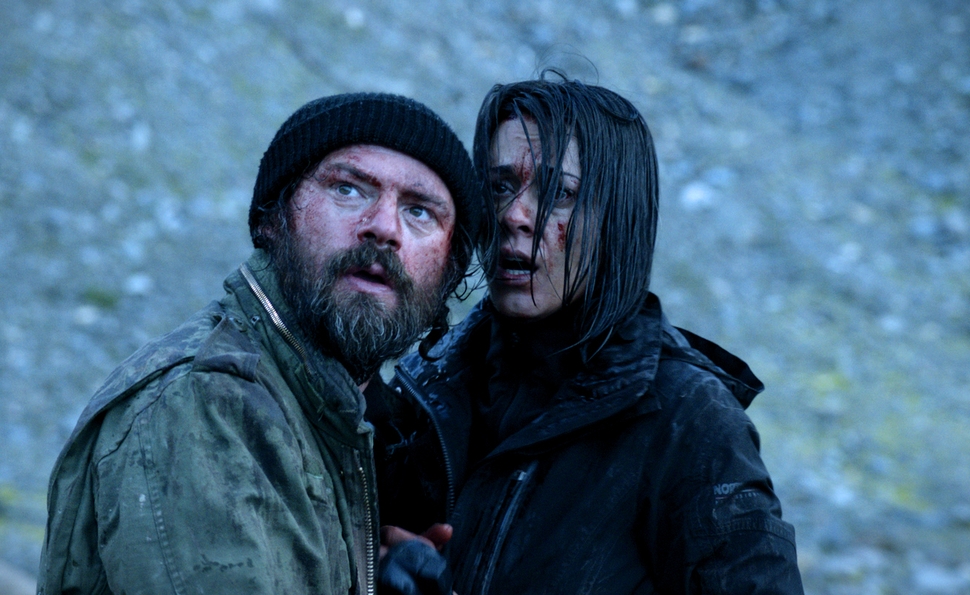 Back in the 1950s, anxiety about nuclear war inspired numerous creature features that attributed their rampaging giant beasties to mankind’s foolish experiments with the atom. Nowadays, climate change has become the bogeyman of choice (see The Day After Tomorrow, 2012, etc.), and it was only a matter of time before someone dreamed up a horror film in which receding ice uncovers monsters from hell. Alas, that novelty, along with a striking location, is all Austria’s Blood Glacier (which was called The Station when it screened in the Midnight Madness program at last year’s Toronto Film Festival) has going for it, since in every other respect, it’s a hilariously inept rehash of John Carpenter’s The Thing, minus the shape-shifting.

Here, the movie’s small, isolated group of scientists is threatened by things, plural, as unusual microorganisms previously buried in the ice are causing drastic mutations and producing murderous hybrid animals. (The alleged scientific basis for this is best left unexplored.) The first sign that something weird is going on occurs when Janek (Gerhard Liebmann), a can-do grump who’s been working at this research station in the Alps for five years, discovers a nearby glacier has turned blood-red. When his beloved dog wanders into a cave and is injured by what appears to be a rabid fox, Janek sensibly attempts to call off an impending visit by a government minister (Brigitte Kren), who’s being brought to the station by Janek’s estranged ex-girlfriend, Tanja (Edita Malovcic). They insist on coming, though, and Janek’s colleagues, concerned that any scare will scuttle their funding, proceed to hide the only satellite phone. So there’s no way to call for help when mutant eagles, ibex, and insects start to attack.

On the basic booga-booga level, Blood Glacier fails completely, combining a fundamentally silly premise (the unfrozen microorganisms somehow function as gene-splicers, creating Brundlefly-style combinations of, say, fox and beetle) with some of the shoddiest special-effects work in recent memory. The film’s monsters are so unconvincing that director Marvin Kren has no choice but to hide them as much as possible via rapid-fire editing and violent shaky-cam, relying on his actors to fill in the gaps with hysterical screaming. Still, that’s preferable to the long stretches during which the colorless scientists trade bland, purely functional dialogue and engage in nonsensical behavior. One of them (Peter Knaack) eventually turns on the others for reasons that make zero sense, simply because the movie desperately needs something to happen at that moment. There’s also a hot young blonde woman, not a member of the research station, who appears almost literally out of nowhere, with no explanation as to what she’s doing alone high up in the German Alps. Suddenly she’s just running from a mutant, screaming her head off.

Now and then, Blood Glacier seems so damn goofy that it’s tempting to view it as a stealth comedy. Brigitte Kren (an established actress who’s also the director’s mother) has some campy moments as the tough-as-nails minister—“Stop eating that banana while you’re crying!” she bellows at one point—and the romantic backstory between Janek and Tanja, which involves her confession that she had an abortion years earlier without telling him, dovetails with the horror plot near the end in such a ludicrous way that it’s hard to believe anyone meant it to be taken seriously. Yet the tone remains somber, even dolorous, making any laughs feel very much at the film’s expense rather than intentional. The movie seems as much a misshapen hybrid as its mutants.