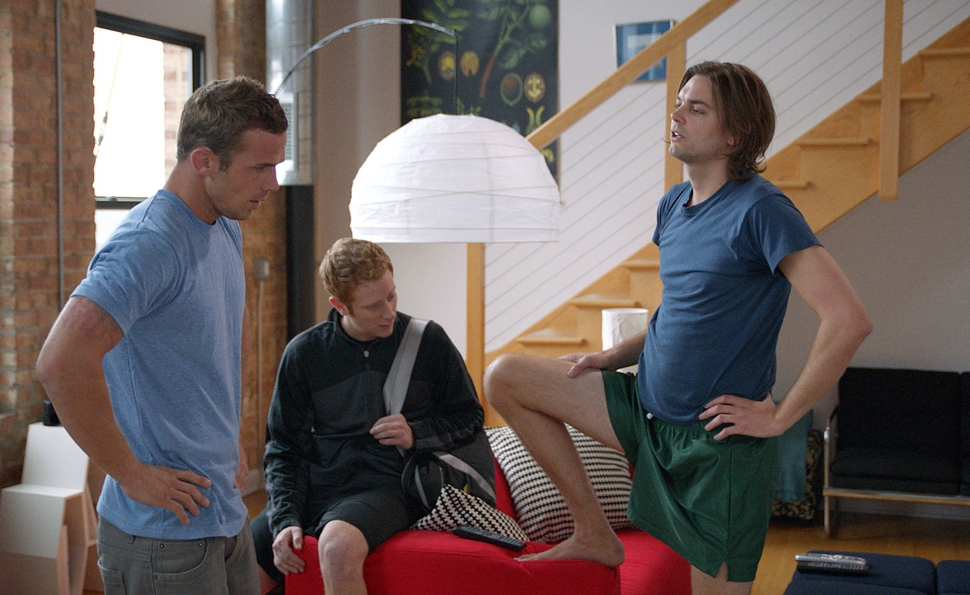 A fool and his penis are soon parted—and then unhappily reunited—in Bad Johnson, a semi-raunchy indie riff on the supernatural-comedy genre inaugurated by Freaky Friday. Cam Gigandet stars as Rich, a gym employee and chronic womanizer who sees himself at the mercy of his member. Casting around for a scapegoat to blame for his inability to keep a girlfriend, he settles on his genitals, and wishes upon a star that they were gone for good.

Quicker than you can say “lowbrow high concept,” Rich has been magically transformed into a 6-foot Ken doll with no use for his massive stash of condoms and hard drive’s worth of porn downloads. Meanwhile, Rich’s junk has detached and mutated into a sentient being: a perma-smirking prick (played by comedian Nick Thune, credited only as “Rich’s Penis”) who relishes his former owner’s emasculation and his own sudden independence. Both men are attracted to Lindsay (Katherine Cunningham), a client of Rich’s who doesn’t suspect her trainer’s conspicuously chivalrous courtship is a matter of necessity, and who seems oddly susceptible to the even more insincere sensitive-guy act put on by Rich’s Penis.

Alternately feisty and clueless, Lindsay isn’t much of a character, but the movie doesn’t need her to be. Bad Johnson is only invested in her relationship with Rich insofar as it serves the underlying theme of redemption: This is a parable about a man who learns to embrace his better self in the absence of his nether regions. Said parable is neither surprising nor profound, but that wouldn’t matter as much if the movie were funny. It isn’t. Instead of trying for something truly outrageous or surreal—qualities that should flow naturally from the script’s insane premise—writer Jeff Tetreault and director Huck Botko opt for rom-com blandness from beginning to end, leaning hard on generic conventions even as they pretend to satirize them.

There are boner jokes here and dirty words there, but no genuine transgression of any kind, and Thune, a reliable enough presence on high-end comedy series (Happy Endings, Burning Love) isn’t dickish enough in a role that calls for little else. As for Gigandet, he’s well-cast as a muscled, irresistible Don Jon type, but he isn’t a resourceful actor, and he fails to muster up any comic terror over his character’s plight. Even in a film that makes a point of keeping the stakes low, Rich should be horrified that he’s going mano a mano with one of his own body parts. (“You used to jerk me off harder than that!” Rich’s Penis shouts during one fist-fight, which, unfortunately, is probably the best line in the movie.) Instead, Gigandet just seems mildly perturbed, and chances are that anybody who actually ends up watching the film will know exactly how he feels.