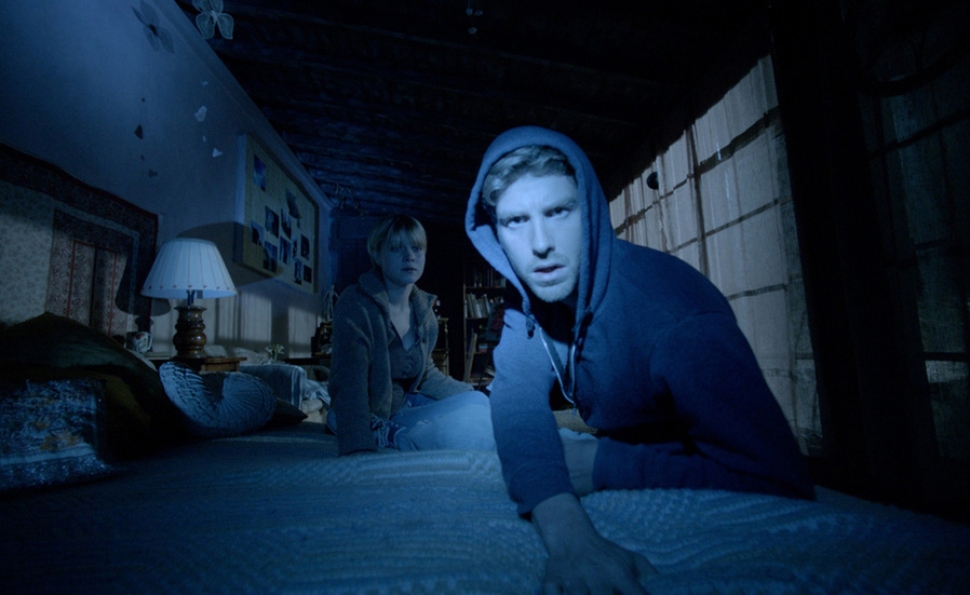 Mr. Jones isn’t a found-footage horror film, no matter how much the evidence suggests otherwise. Yes, the main protagonist makes documentaries, and spends most of the movie toting around a special two-way camera contraption that records both what he sees and his reactions to what he sees. But the film includes a smattering of non-first-person shots, too, and it has an overall level of cinematic artistry that extends to the acting (all performed by longstanding professionals) and the script (which features actual dialogue). Writer-director Karl Mueller has put in a lot of effort to make sure Mr. Jones looks different and is constructed differently from any contemporaneous indie-horror project and/or mockumentary. And that’s what makes Mr. Jones such a bummer. So much work, so much thought, put into something so shitty.

Jon Foster and Sarah Jones play Scott and Penny, an arty young couple who take up residence in a cabin in the desert so Scott can pursue a vague plan to make a documentary about nature. But perhaps because “about nature” isn’t much of a subject—or perhaps because he goes off his meds within days of arriving—Scott spends more time napping than working, and his already-strained relationship with Penny seems about to snap. Then the two of them make a discovery: a spindly stick-statue that Penny identifies as the work of the mysterious “Mr. Jones,” a reclusive outsider artist famous for mailing random people samples of his work (similar to what the late Ray Johnson did). Having found a real subject for a documentary, Scott and Penny start filming and photographing in earnest, including venturing into the artist’s cavernous underground workshop while he’s away.

After a dreary opening 15 minutes, which mostly consists of Scott and Penny confessing their dissatisfaction to the camera and then repeating the same complaints to each other, Mr. Jones livens up once Scott goes to New York to find out more about what the art world thinks of their discovery. And the first time Scott explores Mr. Jones’ workshop in the middle of the night, Mueller assembles a fairly frightening suspense sequence, with lots of moving shadows and narrow escapes—all made more effective by the beauty and clarity of the images in the scenes leading up to it. But immediately after that, Mr. Jones goes into full freakout mode, and stays there for the entire last half-hour. Dreams and reality converge, and frenetic mayhem ensues. Meanwhile, Mueller reuses all the footage he shot for the first half of the film, for a series of flash-cuts and montages that extend a scene of Scott and Penny cowering in their living room well beyond its ability to be meaningful or scary.

The surrealism that dominates so much of Mr. Jones’ final stretch is admirably unusual, but it’s also confusing, and quickly becomes tedious. Also tedious: those two-way camera get-ups, which turn most of the action sequences in Mr. Jones into  a hard-to-follow assemblage of “shaky face shot,” “shaky first-person shot,” “shaky face shot,” and so on, for minutes on end. Mr. Jones leaves an unbridgeable gulf between Mueller’s ambition to make a visually arresting, arty horror film and the hackneyed “young people out of their element find a spooky old house” plot. It’s the same gulf between Mr. Jones’ art and the genius the New York art critics ascribe to it. No matter how creative its frames, Mr. Jones is also just an unimpressive stack of sticks and skulls.