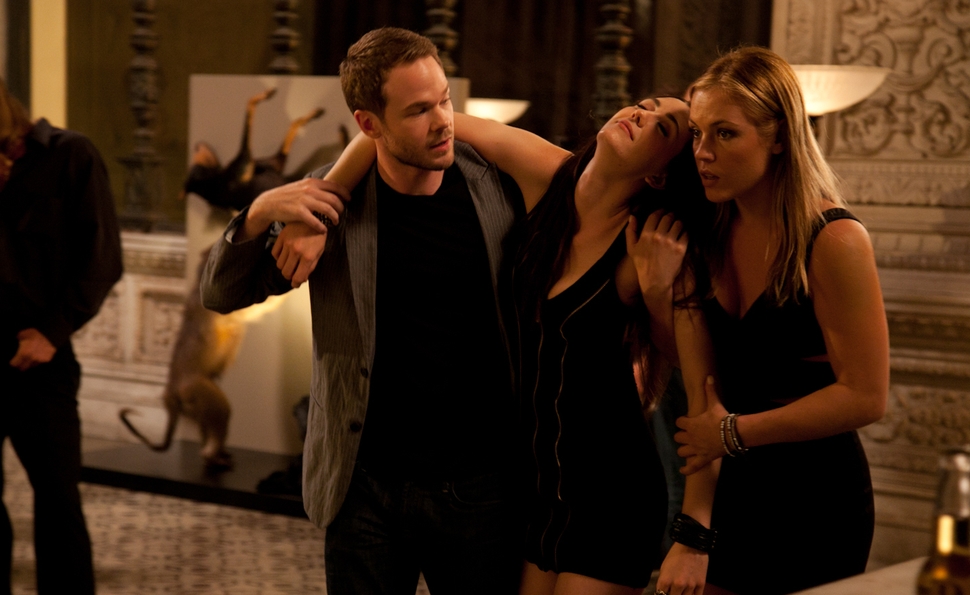 This might sound familiar: Two strangers meet, get to know each other, come to an understanding that they both have people in their lives they’d prefer weren’t alive anymore, then talk about trading murders—talk that neither of them appears to take seriously until one of them acts on it. When the two strangers were played by Farley Granger and Robert Walker in 1951’s Strangers On A Train, an official adaptation of Patricia Highsmith’s novel, the result was one of Alfred Hitchcock’s most memorable films. When the two strangers were played by Danny DeVito and Billy Crystal in the DeVito-directed Throw Momma From The Train, the result was a pretty decent 1987 comedy that paid conscious homage to its source material. There isn’t a train—or a Hitchcock acknowledgement—in sight in Breaking The Girls, but for a while, the film follows the same template faithfully, albeit ineffectively, and with little flair. Later, it breaks from its inspiration, but in putting Hitchcock and Highsmith behind it, the film loses the last quality that sets it apart from any other erotic thriller cluttering up the far reaches of online streaming services and the dustier shelves of our remaining video stores.

Here, the strangers are two college-age women: Sara (Agnes Bruckner), a working-class law student who tends bar to make ends meet, and Alex (Madeline Zima), a wealthy party girl who shows up in Sara’s bar one night just in time to see her get fired for pocketing money from the till. She wouldn’t have been caught, however, if not for the jealousy of Brooke (Shanna Collins), a wealthy fellow student who senses, correctly, some chemistry between Sara and her boyfriend Eric (Shawn Ashmore of the X-Men series). But Alex has a different sort of chemistry in mind, whisking Sara away for a night on the town that includes a trip to the art-exhibit opening of Alex’s hated stepmom, Nina (Kate Levering), followed by booze, hot-tubbing, some sexual experimentation, and down the line, some talk about who they’d kill if they thought they could get away with it.

Shamelessly exploitative, but never entertainingly so, Breaking The Girls bears an impressive pedigree. In 1994, co-screenwriter Guinevere Turner co-wrote and starred in the breakthrough lesbian indie Go Fish. Five years later, director Jamie Babbit helmed the conversion-therapy send-up But I’m A Cheerleader. So maybe it’s a sign of progress that in 2013, Alex’s semi-unhinged character registers less as a regressive stereotype from a time when women who slept with women usually kept an icepick under the bed, and more as merely a dangerous kook who happens to be a lesbian.

Beyond those names, however, little else distinguishes the film. Bruckner is solid in the less-flashy role, but Zima (familiar to viewers of Californication and, long ago, one of the kids on The Nanny) mostly flails about, acting “wild and crazy” without ever suggesting the character she plays is truly crazy or wild. Babbit’s poky pacing—this short film feels much longer than its running time—doesn’t do either star any favors, and anyone tempted to watch for prurient reasons should know the film is more basic-cable-at-10 p.m. sexy than after-midnight-on-Showtime sexy. Besides, there are a couple better version of this story out there already. Why not watch one of those?