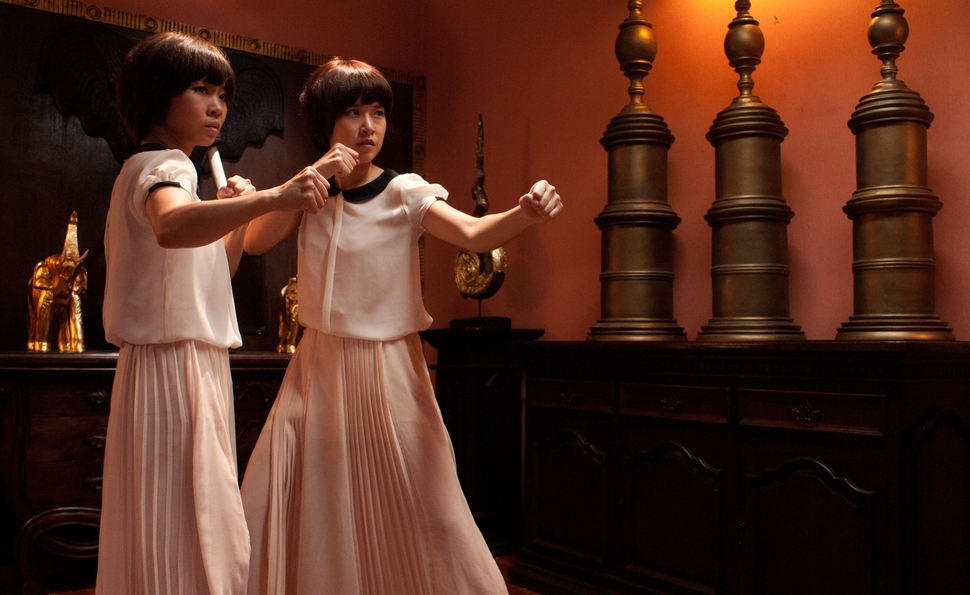 In the immortally stilted words of Roddy Piper in John Carpenter’s They Live: “I have come here to chew bubblegum and kick ass… and I’m all out of bubblegum.” Replace “chew bubblegum” with “frolic with a majestic elephant,” and “kick ass” with “break the arms of everyone in this room,” and that’s more or less what dazzling Thai martial-arts star Tony Jaa does in The Protector and The Protector 2. As Kham, a generally sweet-natured Muay Thai master, Jaa belongs to a long tradition of Jaturungkabart—men who protect the royal war elephants from poachers and enemies of the state. That might not seem like the most active of 21st-century jobs, but it’s enough of a pretext for Jaa to square off against powerful elephant-nappers worldwide. And with a physical talent as sensational as Jaa, a thin pretext is plenty.

Working again with director Prachya Pinkaew, who made his 2005 hit Ong-Bak: Muay Thai Warrior and the first Protector movie, Jaa has to go bigger, as sequels demand, but he isn’t necessarily better for it. Keep in mind: Here’s a star who first dazzled audiences simply by evading—and, okay, occasionally kicking—attackers in an alleyway in Ong-Bak, so an increase in scale (and plotting) isn’t certain to serve him well. Though the action sent him overseas to Australia, where all manner of local and transplanted gangsters stood between him and his baby elephant, The Protector remains, if anything, a more streamlined vehicle for Jaa than Ong-Bak; the ruthlessly butchered Weinstein version, at 81 minutes, is practically one long bone-snapping supercut.

By contrast, The Protector 2 is much longer and busier, which exposes Pinkaew’s weaknesses (directing movies) while limiting his strengths (pointing the camera at Tony Jaa). As the film opens, Kham and his now-grown elephant have their humble provincial life disrupted by Boss Suchart, a rich guy who wants to buy the elephant, and reluctantly takes “no” for an answer. When the animal disappears anyway, Kham hunts Suchart down at an elephant camp, only to find him punched to death, with his twin daughters (Jija Yanin Wismitanan and Theerada Kittisiriprasert) looking for revenge. That sends all three of them into conflict with underground crime boss LC (RZA), who probably has something to do with the missing elephant, but is more keenly interested in deploying his number-branded fighters after Kham—and whoever else he can round up for the job.

Pinkaew spends an inordinate amount of time wading through this needlessly complicated plot, which stalls entirely whenever RZA turns up to evaluate his stable of combatants or launch into a monologue. (Here and elsewhere, RZA’s martial-arts fandom seems to have turned him into a kind of acting tourist.) The best sequence in The Protector 2 basically repeats the cyclist-and-inline-skater-gang attack from the first movie on a larger scale, putting Jaa on a rooftop as masked men on mopeds come at him from all sides. When the sequence opens up into a freeway chase, it’s both a thrilling extension of the action, and a stunt someone other than Jaa could feasibly pull off. Sequel demands or no, Pinkaew should know by now that when given a singular talent like Jaa, it’s best to play to his singularity.

The bigger The Protector 2 gets, the further it gets away from Jaa’s basic appeals: Dashing up and down walls and giving compound fractures to dozens upon dozens of witless henchmen. Jaa does get one terrific showdown against a specialist in capoeira—a Brazilian acrobatic form parodied brilliantly in the Bob’s Burgers episode “Sexy Dance Fighting”—but other scenes give him a needless CGI assist, and the climactic fight against RZA isn’t exactly a test of equal talent. Clearing a room flush with faceless bad guys is what Jaa does, but otherwise, less is more.