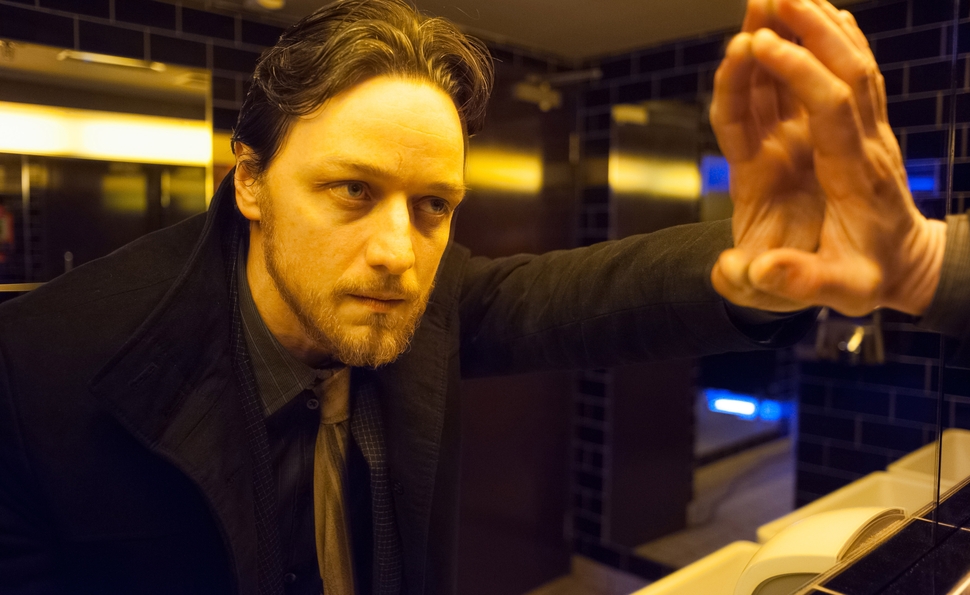 A terrible cop reaches below the bottom of the barrel for the sake of a promotion in Filth, a scorched-black Scottish comedy in love with the depravity of the human condition. James McAvoy plays the Edinburgh detective Bruce Robertson without a strand of humility as he boozes, binges, and schemes to unravel his colleagues’ bids for the job he wants. The brutality of Bruce’s actions, combined with the film’s jaunty, often surrealist tone, give Filth’s humor its bitter sting, as might be expected from an adaptation of an Irvine Welsh novel—this is, after all, the same author who wrote Trainspotting, where a Scottish junkie dives into a public toilet and hallucinates a dead baby on the ceiling.

The laughs tend to come in the moments where Bruce can’t keep up with his own horrible behavior, such as when a plot to get laid involving an “enlarged” photocopy of his penis ends with him failing to live up to his artifice. And as soon as writer-director Jon S. Baird seems like he’s settling into a groove of bad behavior played for winks, he throws Bruce a fleeting, bizarre vision: a dead child, a man with an elephant’s face, a visit from a phantom psychologist (Jim Broadbent) who mocks him incessantly. Bruce is not mentally all there, owing to bipolar disorder, repressed childhood trauma, and the fact that his wife (Shauna Macdonald) and child left him for undisclosed but easy-to-guess reasons. After he inadvertently performs an act of kindness for a nice woman who wants to help him (Joanne Froggatt of Downton Abbey), he’s flummoxed as to where that sudden capacity for good came from, and it vanishes as quickly as it appeared.

The film is billed as “presented by” Danny Boyle, in the same way every Asian martial-arts epic released stateside in the mid-2000s was “presented by” Quentin Tarantino: There’s a clear line being drawn between the film and its desired fan base. That said, Baird must have shared a needle with Boyle’s seminal 1996 adaptation of Trainspotting, because both movies are high on the same buzz: oversaturated visuals, narrators delivering confessionals to the audience, terrifying fantasy sequences, and a pace that just keeps ratcheting up, up, up. The cackles can almost be heard coming from the editing room as one lurid shot replaces another.

Filth is bolstered by a gonzo performance from McAvoy, who seems determined to out-Bad Lieutenant the American Bad Lieutenants; like his Yankee counterparts Harvey Keitel and Nicolas Cage, he even does a scene where he coaxes sexual favors while on duty. McAvoy plays Bruce as a man who does everything vigorously, whether framing a trusting goober of a friend (Eddie Marsan) for a crime or masturbating in a bathroom stall. (The man masturbates at every available opportunity, giving McAvoy plenty of chances to squeal shamelessly and bang his head against the nearest object.) He’s a nasty piece of work, yet even when he’s strangling himself during sex, there’s that tiny bit of fascinating defeatism in his eyes.

Does the Trainspotting style still work, 18 years later? Yes, but with caveats. Filth has considerably less empathy for its characters than its spiritual predecessor (Bruce isn’t so much an antihero as an anti-everything), which can make the film feel too cruel for school. Boyle takes some knocks for his love of grotesque situations, but most of his films have a fundamental humanity below the surface that makes their bleak edges slide down smoothly: Think of Jamal’s beaming smile in Slumdog Millionaire, even after he steps out of a pile of excrement. Better yet, think of the heroes of Trainspotting, who retreat so they can feel a sense of belonging with each other, and are visibly terrified of facing life without that feeling. In Filth, Bruce is trying to squash his most human attributes right up to the end. Praising the movie can feel a bit like being Bruce’s gullible sap of a friend, who always has a good time, but gets roofied for fun the instant his back is turned.