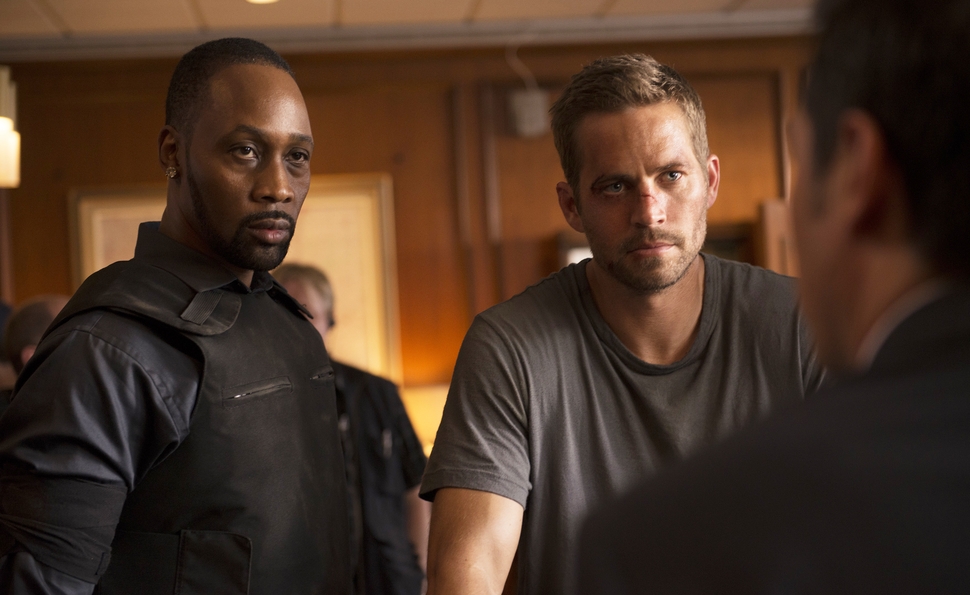 Brick Mansions transplants the 2004 French action film District B13 to America and, like its source, announces early on that its best special effect is of the flesh-and-blood variety, specifically star David Belle. One of the founders of parkour—or the founder, as accounts vary—Belle treats every environment as if it were designed for him to navigate with inhuman grace and athleticism. Now in his 40s, 10 years on from the first time he played the analogous character in the original version, Belle gets a remarkable showcase for his skills in Brick Mansions’ pre-credits setpiece, a trip through the halls and then down, up, and over a crumbling housing project. It’s marred only by the not-so-impressive CGI explosion that marks its conclusion; up to that point, it’s a great bit of action filmmaking. While everyone else appears confined by the forces of physics, Belle moves as if he stepped in from an M.C. Escher dimension where the normal rules don’t apply, and director Camille Delamarre carefully trains the focus on him. An editor making his feature directing debut, Delamarre cuts the action frenetically but smartly, never losing coherence or a sense of place, providing Brick Mansions with a thrilling start, and, unfortunately, giving it nowhere to go but down.

That’s not to say the film nosedives; it just never lives up to its opening or gives Belle as strong of a showcase. Another product of Luc Besson’s EuropaCorp action-movie factory, it’s a faithful remake of District B13, which is set in a near future in which a troubled section of Paris has been walled up and closed off from the rest of the city. (Inevitably, Detroit serves as the troubled American urban equivalent here, with the walled-up zone of Brick Mansions giving the film its title.) As before, Belle’s hero (Lino here, Leïto in the original) wages a one-man war on drugs, running afoul of drug kingpin Tremaine (RZA) and an army of enforcers that includes a man-mountain named K2 (Gouchy Boy) and the violent, sexually aggressive, leather-clad Rayzah (Ayisha Issa). In retaliation, Tremaine and his gang kidnap Lino’s ex-girlfriend Lola (Catalina Denis). Meanwhile, on the nice side of town, undercover cop Damien Collier (Paul Walker) attempts to take down a gangster known as George The Greek (Carlo Rota), a process that eventually leads him to infiltrate Brick Mansions and team up with Lito.

There’s a neutron bomb set to explode, too, but as with most Besson-associated action films, it’s best not to think too much about the plot and concentrate on the action and the spaces in which the colorful characters get to breathe between trading blows. As such films go, however, Brick Mansions lacks the relentlessness of District B13 (or Taken, or the Transporter films), and while Belle is a phenomenal performer, he’s merely adequate when not in motion, and never develops much chemistry with Walker. In a performance that features not one but two scenes in which he chops peppers threateningly, RZA proves he still has a long way to go as an actor, though a scene in which he quotes one of the most famous lines in the Wu-Tang catalog suggests he was hired more for iconic value than acting talent. As a director, Delamarre’s better with human combat than car chases, all of which have an added queasiness in the wake of Walker’s death. Also uncomfortable: the sight of two white guys taking on a crew made up mostly of black bad guys, though this dynamic changes a bit in a finale that brings in another signature Besson touch: a dash of well-intentioned, clumsily employed left-wing politics. Whenever it features feet flying through the air, Brick Mansions is a pleasure. Asked to do anything else, it’s one stumble after another.