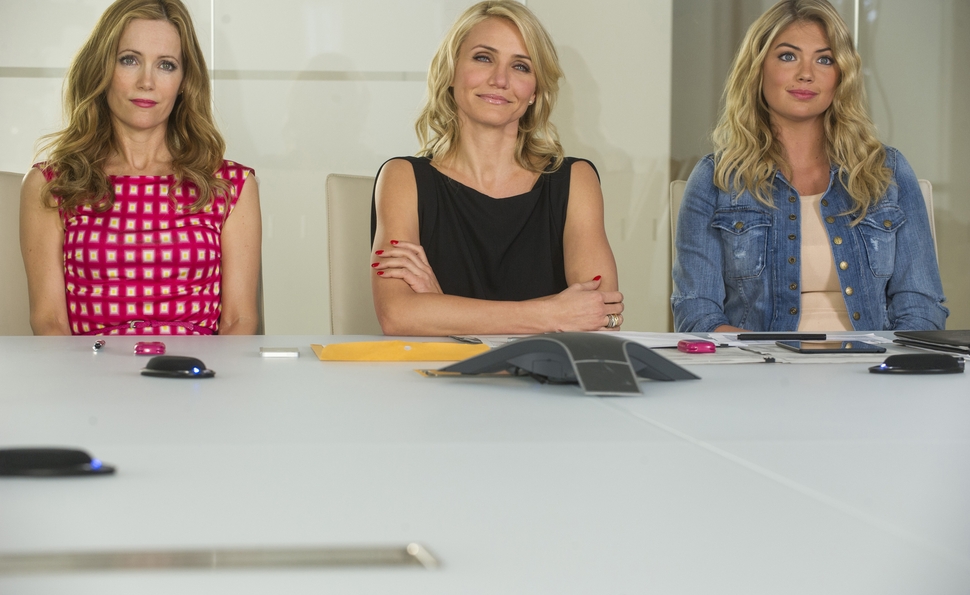 Leslie Mann delivers an extremely big performance in the dire female-bonding comedy The Other Woman, spending seemingly the first hour of the film in a state of perpetual frenzy—weeping, falling, flailing, and screaming. She’s a woman on the verge of a nervous breakdown, a dignity-impaired mess of runaway neuroses and withering despair. It’s a turn so feverishly committed that it helps camouflage the aching emptiness of the film around her. The bigness of Mann’s performance can’t help but set the film’s tone, which goes manic and high-strung to the point of hysteria before settling down and becoming really stupid and gross. Cameron Diaz, a fearless and inspired physical comedian in her own right, is reduced to reacting to Mann, who, like a black hole, sucks up everything in her orbit.

Mann stars in The Other Woman as Kate, a brittle housewife who discovers that her hunky businessman husband Mark (Games Of Thrones’ Nikolaj Coster-Waldau) is cheating on her with a high-powered yet oblivious lawyer named Carly (Cameron Diaz). Kate is predictably devastated, but with no friends of her own, no children, and apparently no life beyond her husband, Kate forces friendship on Carly, following the understandably freaked-out lawyer around like a lost puppy or lovestruck teenager.

Kate’s dogged persistence eventually wears down Carley’s resistance and these natural enemies become unlikely allies, particularly once they come to realize that Mark is cheating on them with a third woman. That would Amber (Kate Upton), a buxom beauty introduced jogging on the beach in slow motion, her cleavage bouncing hypnotically under the life-giving sun. (It’s almost as if the filmmakers cast a Sports Illustrated swimsuit model solely for the sake of the long, lingering shot of her modeling a swimsuit).

Sure enough, Kate and Carly become instant friends with the decades-younger beauty having sex with the man they both loved. This unlikely and more or less instantaneous friendship occurs largely through the magic of dialogue-free montages of the wronged trio drinking wine and/or tequila, laughing and palling around. These women aren’t about to let anything as petty as jealousy keep them from being the best of friends, despite having nothing in common beyond the man they have all had sex with.

The Other Woman gives its male lead a name, an expensive haircut, and an endless succession of stylish suits, but that is the extent of his characterization. He’s a walking, talking Ken doll, the most generic hunk in existence. Yet the film nevertheless expects audiences to be invested in the humbling of a cipher who logs maybe 10 minutes onscreen before the third act brings him back to revel in his humiliation.

Kate’s despair and confusion are played for laughs, but they give the film an emotional charge that suggests this material would have been better off played for psychological drama. The real pain in Mann’s voice and eyes as her world shatters adds an element of emotional truth to a film that doesn’t quite know what to do with it. This is not John Cassavetes movie; it’s Nick Cassavettes movie. So instead of exploring the angst of a sheltered wife whose world has been turned upside down, The Other Woman chooses the low road and has the revenge-seeking trio punish Mark with a series of juvenile frat-house pranks involving sneaking estrogen into his smoothie, informing him he has venereal diseases, and generally channeling their inner adolescent bullies. Mark begins the film an impossibly perfect blank and ends it having endured a gauntlet of scatological punishment as demeaning to the audience as it is to his character.

Every generation gets the battle-of-the-sexes female-buddy revenge comedy it deserves. As a reward for the cinema of the 1970s, audiences at the turn of the 1980s got the pop classic 9 To 5. Audiences in the Clinton ’90s had to settle for The First Wives Club. The current generation must have done something terrible to merit a revenge comedy this dire.