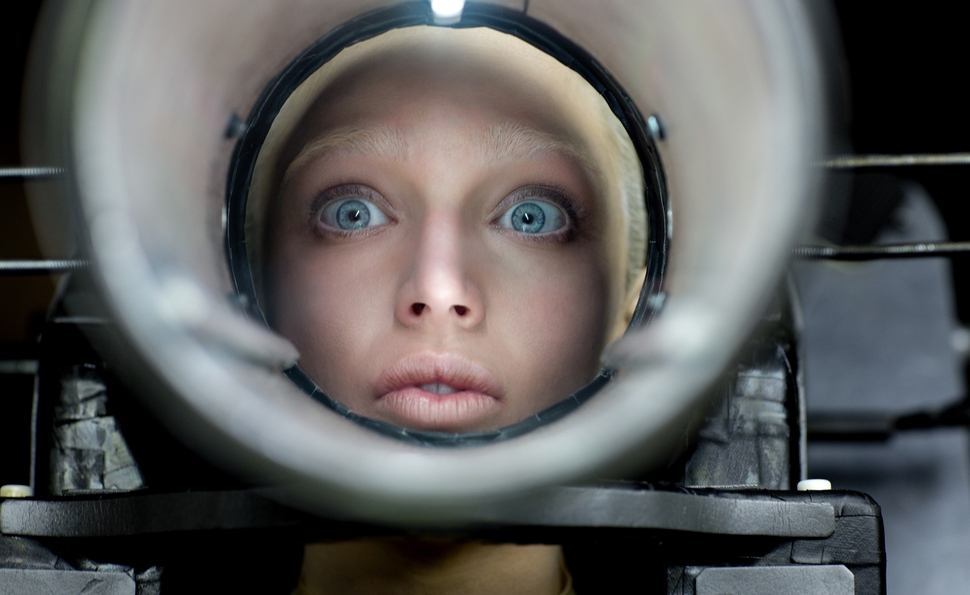 The Machine is small science fiction. In a genre that openly invites invention, it barely bothers. Its story is made up of bits from other chrome-tinted tall tales that shuffle in line like tin soldiers: an evil government’s secret military operation, the cold war between two world superpowers, the pseudo-reanimation of the dead, the humanlike battle droids with consciences. Writer-director Caradog W. James seems to be thinking small every step of the way, with a conspicuous lack of wide shots, a color palette heavy on the darks and grays, and a high-tech science facility that appears to only consist of a couple identical rooms. Yet the film is too self-serious to be a B-movie, even though its presentation seems to suggest otherwise.

The nice thing about well-trodden speculative fiction is it finds a way to keep being relevant. So some familiar pieces of The Machine still feel like products of the modern age, even as their influences from earlier eras—I, Robot; The Terminator; Blade Runner; The Iron Giant—rear their heads just offscreen to announce, “I’m not dead yet!” Here, computer scientist Vincent (a scowly Toby Stephens) heads to work every day at British special ops, building humanoid robots with superior strength so the U.K. can fight its arms race with China. And when a pretty new recruit named Ava (Caity Lotz) is murdered, Vincent uses her as the template for a new killing machine that looks like her (and is played by Lotz again), except with blue computer eyes and tightly secured hair. Vincent’s nasty warlord boss (Denis Lawson) schemes to subvert the compassion inherent in Ava’s circuitry. A little bit Frankenstein, a little bit Lockheed Martin.

To facilitate Ava’s rebirth as a machine, creepy tentacles pour what looks like blood into a human-shaped receptacle, then Vincent gets to peel off a layer of her skin like he’s a plastic surgeon removing a face mask. It’s a rare flash of excitement in what’s primarily a drab, impersonal visual style. Lotz, as the creature, is lots of fun to watch, an appropriately mechanized, just-this-side-of-camp performance that recalls Peter Weller’s work in the original RoboCop. (Hey, there’s another influence.) She feels a strong affection toward Vincent, though the relationship is muddled: Most of the time, she seems to see herself as his surrogate daughter, but there’s an undercurrent of sexual submission as well. No one in The Machine is drawn with especially clear lines, except Lawson’s snarling villain, who at one point punctuates an evil plan with a hole-in-one office golf putt.

Here’s a question: If the British government is fighting the billion-plus people of China in an era beyond fighter jets, atom bombs, and drones, why divert so many resources into building two-legged robots capable of little besides hand-to-hand combat? Ava’s new incarnation boasts super-strength, but no built-in weaponry, so her claim that she’s “part of the new world” seems a bit premature, all things considered. She does know how to dance, though, and there’s a brief, beautiful sequence where she does so in a government hangar for no particular reason. Later, Vincent removes a compassion chip from her brain as she lies conscious on the operating table, eyes wide open, terrified of crossing the threshold into madness. (Hey, it’s 2001, sort of.)

In the same way the movie’s creatures talk to each other in garbled, distorted robot-speak, The Machine is listening to the language of other science-fiction films—but James’ film isn’t up on the dialect, and hears only echoes of substance. By culling from his predecessors on a micro scale, James shrinks the message, too, losing the strong moral imperative that defines the best of the genre. Science fiction doesn’t need to be big-budget to be big-brained.