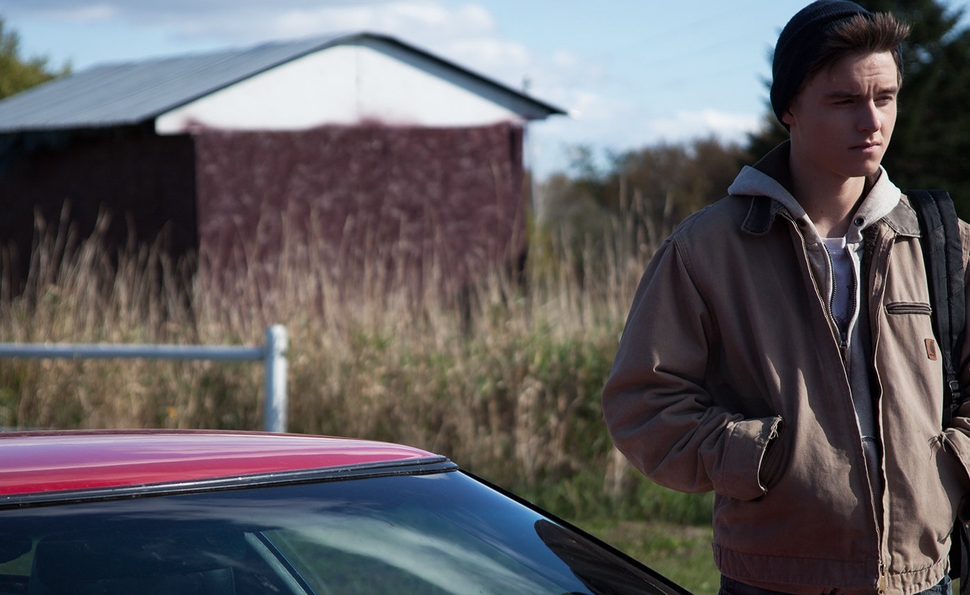 Beneath The Harvest Sky

Restless kids in small towns seeking escape routes are a mainstay of indie cinema—so much so that it’s difficult, at this late date, to come up with a fresh take on the subject. Beneath The Harvest Sky may be the first such film to entrust a large hunk of its narrative to a corporate sponsor, which is doubly weird, given that the protagonists do everything they can to avoid working (indirectly) for the company in question. Set in rural Maine, the movie depicts a local economy devoted almost exclusively to growing blue potatoes, which are ultimately shipped off to make Terra Chips; the industry is viewed as a dead-end life, implicitly equated with the drug-running that’s the only other noteworthy option in town. Still, this bizarre product-placement choice can’t compensate for Harvest Sky’s overall familiarity, embodied by two lead performances that aren’t nearly as specific and detailed as the milieu they inhabit.

First seen lazily throwing rocks at a giant water tower, just to hear the clanging echo, teenagers Casper (Emory Cohen) and Dominic (Callan McAuliffe) have been best friends since forever, and have longed to get the hell out of town that entire time. Accordingly, they’ve both been putting aside money that will allow them to buy a car and head for Boston, where the promise of a more exciting future awaits. Dom, the more levelheaded of the two, is content to work the harvest and flirt with a college-bound girl (Sarah Sutherland), but Casper, who has a hair-trigger temper and a pregnant 15-year-old girlfriend (Zoe Levin), is much more willing to cut corners to find a quick way out. Initially, the two boys just steal and collect some prescription meds for Casper’s father, local drug dealer Clayton (Aidan Gillen, best known as Tommy Carcetti on The Wire and Littlefinger on Game Of Thrones). Before long, however, they’ve signed on for a more ambitious plan that involves smuggling contraband across the Canadian border, unaware that Casper’s ne’er-do-well uncle (Timm Sharp, who played Dougie on Enlightened) has started working, albeit with agonized reluctance, as an informant for the Maine DEA.

First-time feature directors Aron Gaudet (who helmed the documentary The Way We Get By) and Gita Pullapilly (who produced it) clearly empathize with their young dreamers, and they do a good job of conveying the stifling boredom that motivates these kids to seek out a life that won’t involve “exotic vegetable chips” (seriously, did the folks at Terra read the script?) or piling into a Jeep and chasing a frightened moose down the highway. But Cohen and McAuliffe fail to distinguish their characters from the umpteen previous iterations of “sensible guy and his hotheaded best friend,” and the film winds up less interested in their relationship than in the compelling details of the smuggling operation, with which they’re only tangentially associated. Worse, the directors insist on slathering virtually every scene with the steel guitar and plaintive vocals of composer Dustin Hamman, giving the entire movie a monotonously dirge-like tone. Nobody can even mourn a dead loved one here without Hamman invading the soundtrack to illustrate their grief with such profoundly sensitive lyrics as “I wish I was an oak tree / Standing strong and tall / Let the wind blow through me / Trembling leaves and all.” There isn’t a song extolling the nutritious virtues of Terra Chips, but that seems like an oversight.