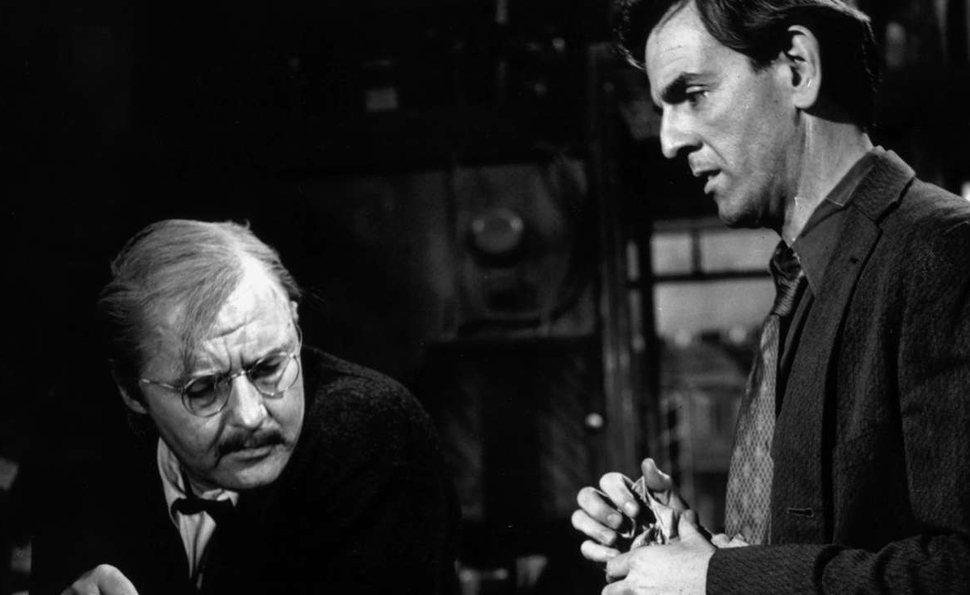 Actors don’t get much hammier than Rod Steiger, who mugged and gesticulated his way through enjoyably over-the-top performances in movies like The Big Knife, The Loved One, and No Way To Treat A Lady, where he played a cross-dressing serial killer. Yet one of Steiger’s greatest and most memorable performances is also one of his subtlest and most restrained.

In Sidney Lumet’s groundbreaking 1964 drama The Pawnbroker—one of the first American films to address the Holocaust, and one of the first to feature explicit nudity—Steiger delivers a deeply internal, Oscar-nominated performance as Sol Nazerman, a brilliant but closed-off professor turned pawnbroker who made it through the concentration camps with his body intact, but his spirit scarred. It’s a virtuoso performance defined more by reacting than by acting. The screenplay gives Steiger some juicy monologues to feast upon, most notably an early tour de force where all the the rage and pain inside him spill out when he answers a would-be protégé’s innocent question about Jews and business with an epic dissertation on the Jewish mercantile tradition as a product of millennia of persecution and rootlessness. But mostly, Nazerman reacts to a world he views with a muted disgust that, over the course of the film, evolves into panicked despair, as he opens himself up to the world just enough so it can destroy him.

Every day, human misery parades itself before Nazerman in the form of desperate people trying to trade in a dream or a cherished memory for the $10 they need to keep going, and Nazerman responds to their sweaty desperation with terse, tight-lipped formality, as if he had to pay a terrible price for every word he utters. These lost souls of East Harlem come to him looking for compassion, generosity, friendship, conversation, or an opportunity to relieve their loneliness and isolation, if only for a few minutes. They’re invariably shut down by a man who has cut himself off from his emotions as a means of survival, and now exists only as a phantom. Nazerman lives in the world without being a part of it; it’s as if he died in the camps along with his immediate family, and East Harlem is a strange combination of hell and purgatory.

Nazerman operates a pawnshop as a front for Rodriguez (Brock Peters), a powerful mobster whose criminal empire stretches across East Harlem. Nazerman both sleeps with and financially supports the widow of a friend who died in the camps, but the arrangement seems to bring him no joy. Suffering is the price Nazerman pays for having survived, and he shuts out anyone who seeks to alleviate his loneliness, from a lonely social worker (Geraldine Fitzgerald) who sees good in Nazerman that he does not see in himself to hustling assistant Jesus Ortiz (Jaime Sanchez), who wants Nazerman to teach him the secrets of his business.

Sidney Lumet’s uncomfortably intense adaptation of Edward Lewis Wallant’s novel gets inside Nazerman’s skin and lets the audience see the world as he does: as unspeakably vulgar, corrupt, and oppressive, a nightmare from which he cannot wake up. The film accomplishes this partially through sound design that stresses the clamor and white noise of urban living. The film chronicles an East Harlem that never shuts up, or quiets down—a special torment for a deeply quiet man like Nazerman, whose greatest goal in life is to be left alone.

Cinematographer Boris Kaufman and production designer Richard Sylbert turn the pawnshop where Nazerman joylessly plies his trade into a grim urban echo of the concentration camps that never leave his tormented imagination, a capitalist prison with him as its primary prisoner. Kaufman shoots the film like a noir, full of shadows, bars, and stylized angles that reflect the subjective point of view of a man who feels the world crashing down around him. In a sense, The Pawnbroker is a noir, with a secondary plot involving a scheme to steal $5,000 from the pawnshop that brings a bitter Jesus Ortiz together with some unsavory characters. But the crime plot comes second to character and mood.

Lumet, who went on to chronicle New York better than just about any filmmaker this side of Martin Scorsese, makes brilliant, inspired use of location shooting, transforming East Harlem into one long sprawl of whorehouses, back alleys, poorhouses, and trash spilling out in every direction. It’s a city that’s ugly, mean, and corrupt to the core, but also gloriously and unmistakably alive in its vulgarity, sadness, and desperation. Only someone who loves New York as deeply as Lumet could capture its grit so compellingly.

Quincy Jones’ fantastic score mainlines the coked-up grit of East Harlem in the 1960s, giving the film a jazzy, propulsive, reckless urban energy that reflects the constant cultural friction between Nazerman’s professorial, Old World Judaism and an East Harlem where Caucasians are outnumbered by black and Hispanic people. The Pawnbroker is powerfully controlled throughout its first two acts, as Nazerman holds off a world that can only give him pain, but grows almost unbearably sad and intense once the walls Nazerman has built for himself come crashing down, and he is forced to confront his complicity in the world’s ugliness.

The Pawnbroker is a paradoxically obsessed with death, yet roaring with life, a jazzy urban tragedy that sees shadows of the Holocaust in the suffering and exploitation of the dead-eyed souls of East Harlem. It’s a painfully, uncomfortably immersive experience that gets so deep inside its protagonist’s wounded psyche that, like Nazerman, the audience comes to pray for a release, any release, from that pain. But like the toughest noirs, The Pawnbroker offers no release and no catharsis, just a narrative that begins intense, and deepens until it’s almost unwatchably sad, in the best possible sense. The Pawnbroker was one of the first major American films to tackle the Holocaust, and time and the deluge of films on the subject that followed in its wake have done nothing to diminish its power.