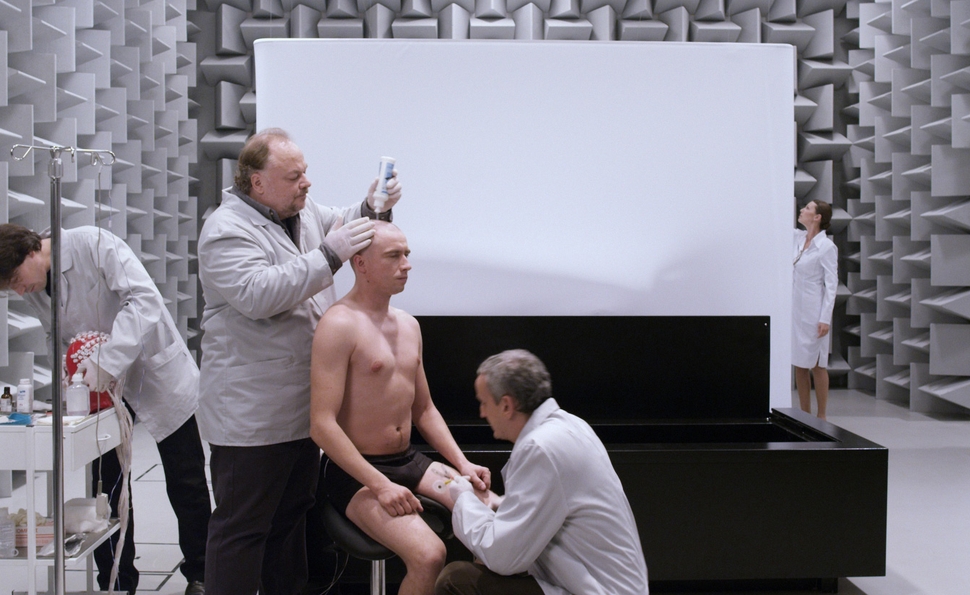 The dreaming mind is an unruly place, populated by memories and governed by desires, neither of which are fully under the dreamer’s control. In Vanishing Waves, from Lithuanian writer-director Kristina Buozyte, Marius Jampolskis plays Lukas, a scientist who offers up that dreaming mind for a radical experiment. He allows his colleagues to wire his brain into a neural network connected to the comatose Aurora (Jurga Jutaite), whom Lukas has never met, and isn’t allowed to see. Lukas is supposed to report on what he sees in Aurora’s head, which his colleagues will then compare with what they already know about her, to test whether the technology actually works. But when Lukas “meets” Aurora inside their shared consciousness, the two of them embark on a sexual affair that gets more surreal and perverse with each session. Lukas doesn’t say anything about this psychic sex-tourism during his debriefings, because it’s embarrassing—and because he’s concerned that he’s committed such a huge violation of ethics that he’ll never be allowed to see her again.

The vivid, visionary quality of Vanishing Waves’ fantasy sequences stands out immediately, thanks in large part to Buozyte’s French collaborator Bruno Samper, credited as co-writer and “visual style author.” Even before Lukas slips into the dreamscape, he gets shaved, oiled, and wired up in a sensory-deprivation chamber with white waffle-iron walls that looks like a room from the Stanley Kubrick interior-design collection. And when the hero enters the subconscious realms, they keep getting more elaborate and unusual, beginning with just water and sand, then expanding to include an enormous beach house that looks like it was constructed from shredded computer paper, and a mansion with an orgy room filled with writhing naked bodies that literally melt into each other. Buozyte takes her time in exploring these spaces, letting Peter Von Poehl’s pulsing post-rock soundtrack lull viewers into a dream-state of their own. 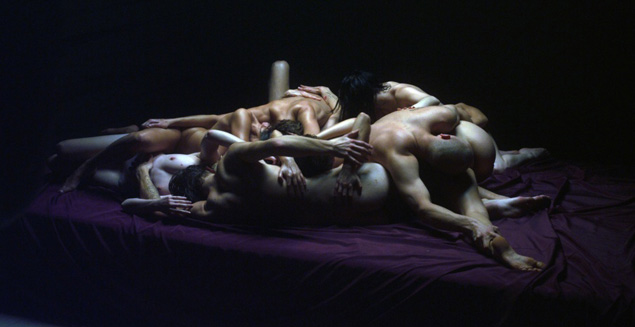 After a while, the art direction loses some of its initial dazzle, and becomes just the world of Vanishing Waves—not inherently special. It matters more what happens in that world, and it’s there, Buozyte and Samper fall a little short, becoming so enamored of mood-setting and cinematic sensuality for its own sake that the movie sometimes stalls for minutes on end. Because Aurora is a blank by design, and because Lukas is also a fairly simplistic character—not much more than a sexually frustrated man with a violent streak—it’s hard to see what any of the principals are getting out of this experiment beyond erotic stimulation.

Plot and character sketchiness aside, though, Vanishing Waves is incredibly absorbing, because Buozyte and Samper are smart about how sexual urges can override all reason and obligation. The mind-melds in Vanishing Waves have some similarities to the dream-crimes of Inception and even the “drift” of Pacific Rim, but Buozyte and Samper quickly toss out the technological marvel of it all and just make a science-fiction version of Last Tango In Paris, where the hero blows off his job so he can go chase tail. (Once again, someone invents an amazing new communication device, and someone else figures out how to use it for porn.) More to the point, Vanishing Waves leaves open the question of whether Lukas ever really connects with Aurora on equal terms, or just takes advantage of his active brain and her dormant one to persuade her to get freaky.

This is where Vanishing Waves is most effective, in showing how the limitlessness of the human imagination can lead to dark areas. Lukas and Aurora’s initial trysts are fairly romantic, as they roll around on a floor that keeps tilting, having sex that’s beyond acrobatic. Later, they paw at each other’s skins like curious animals, checking to see if their prey is still alive; then they bite each other, harder and harder. Unbound by social niceties or physical limitations, these two pilgrims convert noble scientific ideas into raw id.

Artsploitation’s double-disc DVD set contains nearly two hours of extras, though only about 25 minutes of them are directly related to Vanishing Waves, in the form of a short interview with Buozyte and some behind-the-scenes footage and interviews shot during the making of the film. Those features are fairly routine, mainly dealing with the challenges of making such an ambitious picture on a Eurofilm budget, and acknowledging the creative debt Buozyte owes to Michelangelo Antonioni. The big bonus here is The Collectress, Buozyte’s 86-minute debut feature—also co-written with Samper—which tells the story of a therapist for the developmentally disabled who’s emotionally numbed by her father’s death, and responds by obsessively staging and watching videos of herself in socially awkward situations. Like Vanishing Waves, The Collectress is hampered by a lead character with one-dimensional hangups, but Buozyte’s first film is equally incisive in how it reveals the limits of a clinical approach when it comes to human emotions.