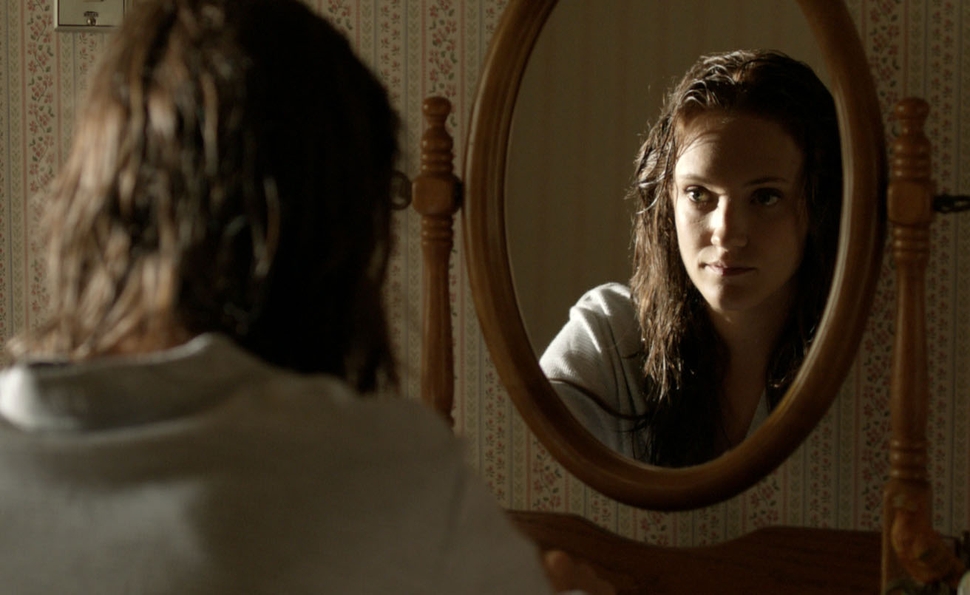 Proxy begins with an act of savagery so potentially upsetting for some viewers that Colin Geddes, the venerable programmer for Midnight Madness at the Toronto Film Festival, felt the need to warn people in his notes for the film. When Geddes says “brace yourself,” it’s a good idea; the scene in question isn’t especially gory, but it’s hard to watch nonetheless, in part because it goes on and on and on. That’s equally true of the movie as a whole, which is less a horror flick than an inscrutable psychological thriller, more disturbing in its implications than in its slow-burn narrative or its few acts of violence. (Presumably, that’s why Geddes chose to program it in TIFF’s Vanguard section rather than in Midnight Madness, though it’s being distributed by IFC Midnight.) Director and co-writer Zack Parker (Scalene) combines a Hitchcockian penchant for disorientation with a Brian De Palma-esque formal bravado, and he’s made the rare film that’s impossible to peg all the way up to its final minutes—a truly unnerving study in multiple pathologies.

Just figuring out what the title might signify demands some effort. The allusion to Münchausen syndrome by proxy—the phenomenon in which a caregiver deliberately induces illness in someone else, usually a child, to get attention (as seen in The Sixth Sense)—is fairly obvious, but there’s no actual instance of MSBP in the film… at least not in any conventional sense. There are some seriously screwed-up mothers, though. Esther (Alexia Rasmussen) loses a fetus just a couple of weeks prior to her due date, and reluctantly agrees to attend a group-therapy session for grieving parents, even though she seems more numb than distraught. There, she’s swiftly befriended by Melanie (Alexa Havins), whose husband and young son were killed by a drunk driver. Or so she claims. The first sign that something weird is going on happens when Esther spots Melanie in a department store, frantically pleading with a security guard to help her find her missing son; Esther then follows Melanie to the parking lot, watching her retrieve a little boy from a car and hustle him back into the store. This naturally emboldens Esther to kiss Melanie, who freaks out for some strange reason. “I’m not a lesbian,” she protests. “Neither am I,” Esther replies.

Confused yet? Proxy is actually even more bewildering than the above (heavily abridged) synopsis suggests, as certain details are best experienced tabula rasa. About halfway through the film, Parker does something that’s been attempted only a handful of times in cinema history, and only once before with such dazzling flair. Still, the film’s excellence lies not in its “twists” (which are actually just straightforward actions made uncanny by the withholding of ordinary emotional cues), but in its unemphatic portrait of aberrant behavior. In more ways than one, Proxy doesn’t have a protagonist—just various individuals struggling to maintain a façade of normalcy. Parker’s compositions are clean, precise, unfussy; consequently, his occasional baroque displays pack an unexpected punch, with one sequence in particular so over the top that it plays like fantasy, which it isn’t. (Shrewdly, Parker then introduces fantasy elements, which he shoots in a naturalistic fashion designed to make viewers question whether they saw them correctly.)

Admittedly, this isn’t a film for every taste. The performance style is intentionally artificial, which some may find off-putting; Rasmussen, in particular, is tremendously effective as Esther, who remains eerily unreadable at every moment except one. (Joe Swanberg, on the other hand, strives to give a proper performance in a key supporting role, and his emoting slightly compromises the film’s integrity.) There are also some lapses in logic to be ignored, like a truck left behind at a crime scene that would surely have been immediately found and impounded by the police in real life. Then again, Proxy isn’t the kind of movie that cares much about verisimilitude. Parker commissioned a score by his regular collaborators, the Newton Brothers (Oculus), and they turned in crazed orchestral cues reminiscent of Bernard Herrmann and Pino Donaggio; their music is used sparingly, but its frenzied presence serves as a reminder that even the film’s minimalism is a form of expressionism. Low-budget genre pictures as bold and ambitious as Proxy don’t come around often; even when they do, few of them boast execution that’s as accomplished as the concept. More so-called “midnight movies” could stand to be so inventively offbeat.