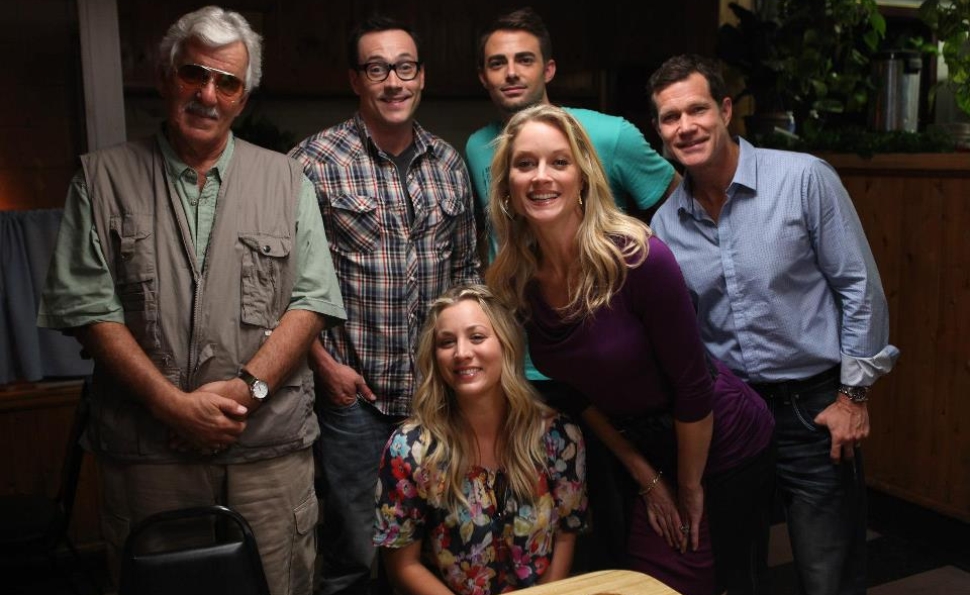 The first scene of Authors Anonymous introduces Alan and Colette Mooney, an attractive, narcissistic husband and wife who are under the impression they’re preparing to star in their own reality TV show. When they’re informed by an unseen, unheard camera operator that they’re actually being filmed as part of a documentary about all six members of the Mooneys’ weekly, L.A.-based writing group, their response is… confused.

“I guess this is going to be like that thing that we watched on cable the other night,” says Colette (Teri Polo), squinching up her pert nose.

“Yeah, The Holocaust,” Alan (Dylan Walsh) answers. “That was long.”

“That was very long,” she agrees.

It’s the kind of dry, improvisational exchange between two remarkably oblivious people that has become a signature of Christopher Guest’s mockumentaries, and that director Ellie Kanner is clearly trying to make a signature of this film. Unfortunately Kanner—now a filmmaker after years of working principally as a casting director—and first-time screen scribe David Congalton try a little too hard. The result is a movie about writerly eccentrics whose eccentricities come across as overwritten.

Aspiring novelists must have certain characteristics to succeed: perseverance, high tolerance for rejection, and often, a borderline-delusional confidence in their prose-crafting abilities. Each of the six main characters pull off that personality hat trick to varying degrees, although on the delusional front, there’s a clear tie between Polo’s Colette—hard at work on a blatantly atrocious, steamy potboiler called Nyet: Not Yet—and John K. Butzin (Dennis Farina), a Tom Clancy wannabe, right down to the aviator sunglasses, who brags endlessly when his military thriller is released by the esteemed publishing house U R The Publisher. (Watching the late Farina dig into his character’s absurdist, third-person braggadocio in what turned out to be one of his last movies is one of the few genuine pleasures in Authors Anonymous.)

But the real success story of the group is Hannah Rinaldi (The Big Bang Theory’s Kaley Cuoco-Sweeting), a seemingly good-hearted literary novice who manages to land a lucrative book deal, with the coveted movie option to boot, although she’s never read The Great Gatsby and repeatedly comes up answer-less when asked to name her favorite author. Her remarkable achievement inevitably sets off a chain of resentment and jealousy within a group designed to be supportive, sometimes to a fault. (At some point, someone needs to tell some of these people more bluntly that their first, second, and third drafts are just terrible.)

Obvious hints abound that suggest Hannah has consistently resorted to, uh, other means to maximize her book-publishing-world appeal, which is the sort of interesting sidebar that any reputable documentary crew—assuming a reputable documentary crew would actually make a film about a motley band of not-terribly-gifted writers—would explore further. That’s the core issue that makes Authors Anonymous ultimately cave in on itself like a novel devoid of a clear narrative arc: The faux-doc foundation simply doesn’t work here.

All the confessional, talking-head shots of aspiring wordsmiths pretentiously discussing their projects or pointing to the rejection letters they’ve turned into wall art are supposed to feel extemporaneous, intentionally-yet-unintentionally hilarious in the style of a Best In Show. But perhaps because the fake-doc construct has become so familiar—it’s been done repeatedly in the past decade, in everything from Sacha Baron Cohen films to sitcoms like Parks And Recreation and Modern Family—the bar for turning that approach into something fresh and genuinely funny is simply too high for this movie to clear.

Occasionally, Keller and company nail it. When Colette leads the camera crew to the backyard garden that serves as her fountain of inspiration—“I believe that every writer needs to have a place where they can find tranquility and peace!” she shouts over the sound of her neighbor’s leaf-blower—the chuckle is well-earned. But Hannah’s fumbling attempts to explain the title of her novel, Sleeping On The Moon (“It’s a metaphor, yes!” she finally decides after a prompt from her mother), are way too forced. As a sitcom veteran, Cuoco-Sweeting is all too eager to land the joke.

In the best mockumentaries, the audience doesn’t necessarily need to know why the purported documentary is being made, or where it will ultimately be seen. All questions regarding basic logic or how, exactly, these shots are actually being captured on the fly can be batted away with an approach that seeks to find the humanity in a group of compelling characters first, and the humor in them second. The priorities of Authors Anonymous are reversed in this regard; the only one of the writers’-group members who comes across as a potentially real person is Henry, largely because Chris Klein chooses to play him with an admirable restraint. Nothing he says is terribly funny. But it’s possible to believe in this guy, who delivers pizzas and cleans carpets while trying to shape the Great American Novel, and lives in an actual L.A. that extends beyond the one being filmed for this supposed documentary.

One moment in Authors Anonymous captures a personal conversation between Henry and Hannah, just after one of their writers’-group meetings has ended. Hannah looks directly into the camera behind her and points to Henry, calling him a “great, amazing writer.” Then, with no break in the conversation, the angle on the pair switches to the opposite view of where they’re standing. Yet viewers can’t see the DP or shooters perched on the other side, where they would have been just a second ago. It’s a little detail that probably slipped by unnoticed all the time on, say, pretty much every episode of The Office. But in Authors Anonymous, it sticks out, for the same reason inconsistencies in a lousy novel become more irksome than off-notes do in a brilliant one: because the storyteller is asking the audience to do too much of the heavy lifting required to turn the world she’s built into a recognizable, believable place.