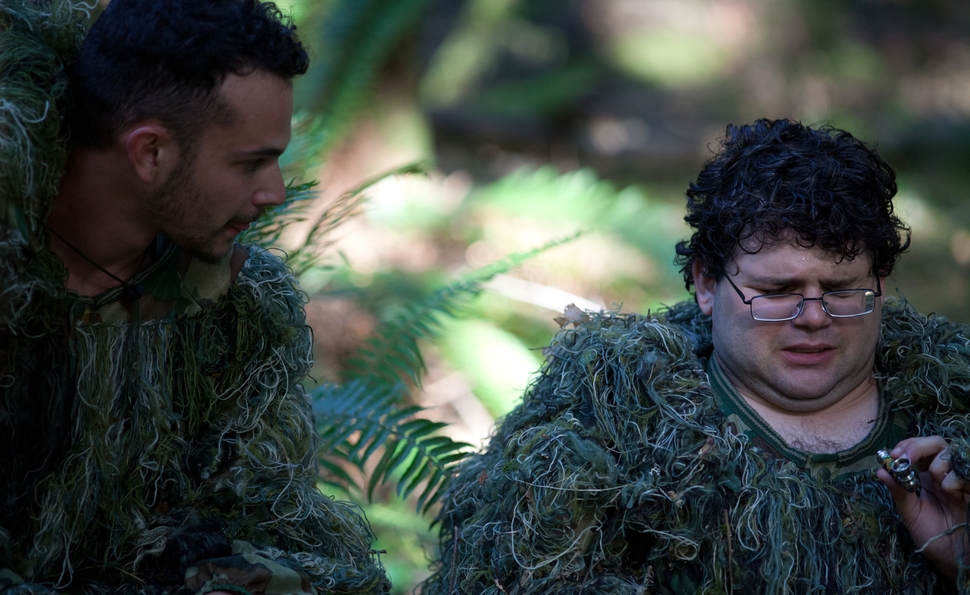 Kid Cannabis starts out like a Risky Business-style comedy about the intersection of youth, vice, and free enterprise. Then it morphs, less confidently, into a harrowing, violent true-crime thriller. It dramatizes the rise and fall of real-life pot smuggler Nate Norman, a chubby high-school dropout who escaped the pizza-delivery business by recruiting some pals to hike $68 million in high-grade reefer across the border from Canada into his native Cour D’Alene, Idaho.

That’s according to the movie. A 2005 Rolling Stone story about Norman (which seems to be where the unpromising title “Kid Cannabis” came from) claims it was more like $18 million. As with last year’s The Wolf Of Wall Street—a film Kid Cannabis strongly recalls, with its unrepentant first-person narrator and its multiple scenes of anything-goes parties, generously supplied with babes and coke—simply finding out what happened to the guy whose escapades inspired the picture is easy enough, for those watching for the story, rather than for the artistry of the telling. Which in this case swings haphazardly between “workmanlike” and “inspired.”

For those who share the perspective of Norman’s mother, who speaks for everyone in the film except the American cops when she exclaims through tears, “It’s just pot!”, it’s also easy to feel the blood boiling over the insanity of U.S. drug-enforcement policy. Wall Street wolf Jordan Belfort, who defrauded more than 1,500 clients, served a mere 22 months in prison, while Norman, who surrendered to authorities after they threatened to put his mother in jail for conspiracy, got a 12-year sentence with no chance of parole for a decade. More maddening: Gio Mendiola, who was convicted of killing Brendan Butler—Norman’s rival in the Cour D’Alene drug trade—got life, but with the chance of parole in eight years. Butler hired Mendiola to kill Norman, but when their relations soured, Mendiola killed Butler instead. Once again: The confessed killer is eligible for parole sooner than the guy who masterminded the importation of a drug less dangerous than alcohol.

The film, which takes the sort of liberties expected from a fact-based fiction, hints at the possibility that Norman might have paid his would-be assassin to double-cross and kill Butler instead—which really would make Norman a menace to society, instead of just a shrewd young entrepreneur who was kind to his mother and younger brothers, and who refused payment for shoveling his elderly neighbor’s driveway when it snowed. In any case, Norman has never been linked to Butler’s death.

It’s a credit to Stockwell’s engrossing (though slightly schizophrenic) movie that it engenders sufficient curiosity to inspire viewers into seeking out non-fictional accounts of the story. Stockwell’s lighthearted first half milks the contrast between American and Canadian marijuana policy for several funny scenes. Norman, played with just the right shading of transparent bravado by Jonathan Daniel Brown, is stopped and searched every time he crosses the border in his mom’s battered old hatchback. Once he and pal Topher Clark (Kenny Wormald, who had the thankless job of filling Kevin Bacon’s sweaty tank top in the Footloose remake a few years back) get to Canada, a highway patrolman helpfully advises them that the best bud is to be found in the isolated hamlet of Nelson, British Columbia, about 160 miles north of Coeur D’Alene.

There, the boys meet John Grefard (the great character actor John C. McGinley), a grower who’s spent 20 years cultivating a strain of high-grade weed. Showing off his product to potential customers, his sales pitch is almost lustful: “Look at that thick stem. Strong veins. I love the frosty look, don’t you?” With their supplier in place, Norman looks to get into business with a volume dealer, Barry Lerner. Ron Perlman, who usually plays heavies when he isn’t acting under heavy makeup as Hellboy or CBS’ gentle Vincent from Beauty And The Beast a generation ago, is unusually restrained in the role. He no longer has to threaten people to feel threatening.

Stockwell’s varied filmography includes the 2001 romance Crazy/Beautiful and the 2006 horror picture Turistas. He isn’t a flashy filmmaker, but he gins up at least one bravura sequence: Norman lectures his recruits on the ingenious particulars of their nocturnal drug runs like the stoner version of Tommy Lee Jones’ “warehouse, farm house, henhouse, outhouse, and doghouse” monologue from The Fugitive, intercut with time-jumping scenes of the plan in motion. It’s a common caper-film trope, but used to good effect here. It imparts a respect for the discipline a crew of mostly 18-to-20-year-olds brought to their operation, half a dozen guys running over miles of wooded terrain in the dark, each one humping a canvas hockey bag loaded down with cash (northbound) or chronic (southbound). Even one of the detectives quoted in that Rolling Stone story expressed his reluctant admiration for the military snap of their operation, at least until they got greedy, got sloppy, and started abusing cocaine—then the natural arc of gangster stories asserted itself.

It’s appropriate and even inevitable that any film based on true events will take liberties with the facts. Stockwell reduces the number of players involved, which makes for a cleaner narrative. (One of the real case’s most delightful details, that Norman’s stripper girlfriend had a painkiller-addicted cat named Titty Bar Bob, is nowhere in the film, sadly.) But one of his alterations is baffling: Title cards say one early scene takes place on October 31, 2005; later, a pivotal scene begins with the dateline June 4, 2006. The specificity of these dates has little bearing on the story Stockwell is telling, but they’re wrong. In real life, Norman and Clark made their first smuggling run in 2001, Butler’s body was found in late 2002, and a judge sentenced Norman in 2004. Using real dates would make sense. So would using no dates at all. Stockwell’s decision to use specific-but-fake dates doesn’t weaken the film exactly, but it does feel like an arbitrary, unprofitable deviation.

He’s captured something, though, in illuminating the inner life of Norman, a kid who never had anything going for him, but a strong work ethic and an eagerness to please. The voiceover Stockwell has written for him is all swaggering hyperbole: He’s always fretting about getting “rolled on and sold on,” wary of a life “busting rocks and dodging cocks.” Brown’s performance as Norman goes deep enough to penetrate his protective bluster: There’s more Max Fischer in him than Tony Montana. He’s the reason this convincing pro-legalization editorial is also a memorable coming-of-age story. A world in which everyone is stoned isn’t nearly as scary as world in which 19-year-old boys are rich.