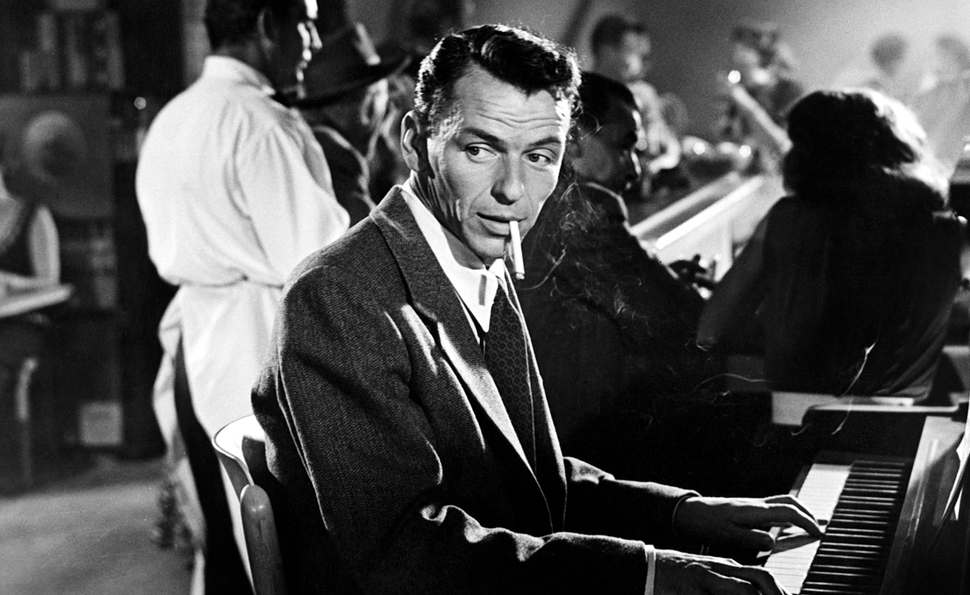 A resurgent Frank Sinatra, having resurrected his film career with an Oscar-winning supporting turn in 1953’s From Here To Eternity, shambles sideways into the cozy domestic utopia of 1954’s Young At Heart, looking like someone who suspects he might get stabbed in a back alley at any moment, and would welcome the sweet release of death. Sinatra doesn’t just look thin; he looks a missed meal or two away from disintegrating into nothingness. It’s as if he’s been subsisting solely on a diet of whiskey, cigarettes, saloon songs, and sadness.

Sinatra doesn’t appear until deep into the film’s first act. The moment he appears onscreen as Barney Sloan, a self-destructive pianist with a complicated relationship with fellow songwriter Alex Burke (Gig Young)—and the universe as a whole—the film stops being a leisurely domestic comedy about a nice musical family in a nice house in a nice neighborhood, trying to marry off its nice daughters to nice young men. From that beginning, it shifts dramatically into something deeper and more mournful.

A remake of 1938’s Four Daughters—which was so popular, it spawned two sequels and was nominated for five Academy Awards, including Best Picture, Director, and Screenplay—Young At Heart casts Doris Day as Laurie Tuttle, a headstrong singer who falls for the brash Alex when he shows up at the family’s front door looking for her musician father. Alex is a charmer full of big talk and big dreams, and he makes an impression not just on Laurie, but also on her sisters Fran (Dorothy Malone) and Amy (Elisabeth Fraser).

Then Barney shows up at the family’s home in search of his friend and collaborator Alex, but also hoping for a little sympathy, and maybe a home-cooked meal and a hug. Barney’s self-lacerating wit and haunted air brings out the maternal side in Laurie, who sees him as a lost little puppy waiting to be saved. She casts Alex aside to try to save Barney from himself, his demons, and his stubborn, strongly supported belief that the world has nothing to offer him but frustration and despair.

A fedora on his head, a cigarette dangling rakishly from his lips, Sinatra uses his wit as a weapon only against himself; he spits out his self-inflicted insults with a speed that suggests he can’t expel these poisonous words from his body quickly enough. Even in a crowd, Barney is fundamentally alone, and director Gordon Douglas films Sinatra in a way that isolates him from the rest of the cast, highlighting his desperate estrangement from the happy, nurturing family life that sustains Laurie and her sisters.

Douglas’ most audacious choice was to have Sinatra, at the height of his stormy charisma, belt out “Someone To Watch Over Me” on a piano above the deafening roar of a chattering, laughing, oblivious suburban crowd; to them, Sinatra’s heartrending torch song is nothing more than background noise. The beauty and poetry of that inimitable voice is lost on these infidels, and Sinatra’s world-weary body language and gallows humor makes it apparent this is merely the latest awful, oblivious crowd in a lifetime full of them. Sinatra’s great gift as an actor was to be so effortless that he never seemed to be acting. His performance in Young At Heart, accordingly, seems to come from somewhere deep within him; when he sits down at the piano, Sinatra seems to be revealing something painful and true about himself.

Young At Heart is a smartly cast, expertly acted ensemble film, but it unmistakably belongs to Sinatra. Pity poor Gig Young; in any other film, he’d be the dynamic superstar, but Sinatra reduces him to mere “other guy” status. Just about the only thing keeping Young At Heart from being one of Sinatra’s best vehicles is a cop-out ending that spares Barney the fate he has seemingly been speeding toward all his life. But while Young At Heart gives into unconvincing uplift at the end, the conclusion’s plastic smiles don’t linger like the much more memorable image of Sinatra in his fedora, big blue eyes burning with pain as he sings of pain and heartbreak.