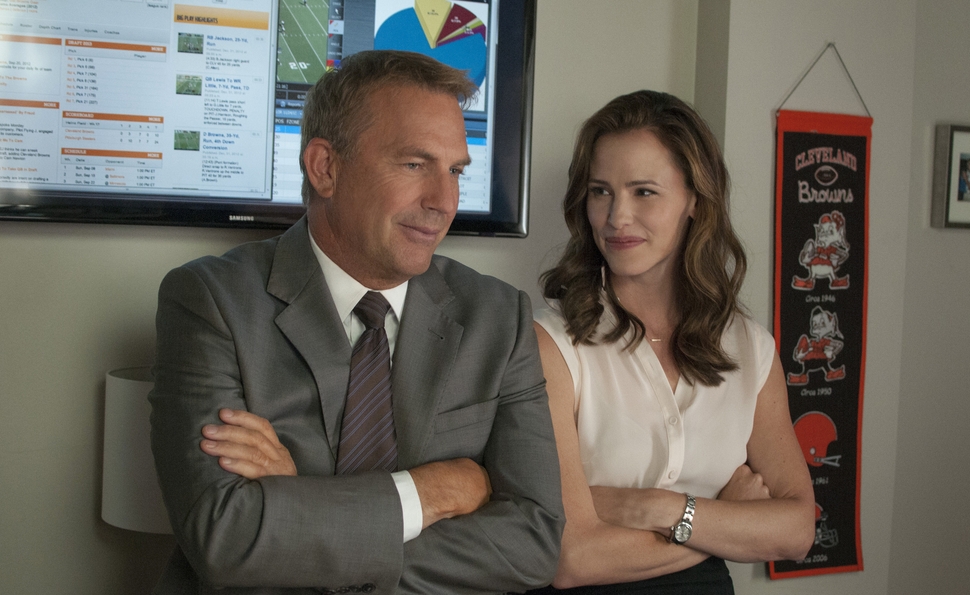 Ivan Reitman’s movies are about misfits making good. His heroes are square pegs who find clever ways to wedge themselves into round holes without sanding down their edges. They’re goofballs who become unlikely soldiers (Stripes); exiled academics turned paranormal exterminators (Ghostbusters); undercover cops who conquer the stodgy education system (Kindergarten Cop); average Joes who expose corruption in the U.S. government (Dave); and male scientists who decide to impregnate themselves (Junior). To that list, Reitman now adds an NFL general manager who dares to defy conventional wisdom on (and in) Draft Day.

His name is Sonny Weaver Jr., and he’s had a rough year, both personally and professionally. His team, the perennially terrible Cleveland Browns, arrive at the 2014 NFL Draft in desperate need of good news. Sonny (Kevin Costner) has a player he wants to pick, a cocky but underrated linebacker (42’s Chadwick Boseman), but that choice will satisfy none of the many masters he serves. His new coach (Denis Leary) is hungry to prove his past success with another team wasn’t a fluke; he begs Sonny to draft players who will fit into his offensive system. Their owner Anthony Molina (Frank Langella) couldn’t care less about systems or defensive backs; he simply craves the spotlight, and orders Sonny to make an attention-grabbing move whether or not it’s good for the franchise’s long-term health. That would mean drafting a Heisman-winning quarterback (Josh Pence), whom scouts and analysts claim is the greatest football prospect in years. But Sonny already has a good quarterback (Tom Welling), and his gut says there’s no such thing as a sure thing.

Though Draft Day includes snippets of authentic NFL footage (and features cameos from numerous former players, media personalities, and even Commissioner Roger Goodell), it’s an unusual sports movie—one that, more so than even Moneyball, takes place almost entirely off the field. The script, by Scott Rothman and Rajiv Joseph, focuses instead on the boardrooms and front offices of the National Football League, and the relatable and sometimes soul-crushing reality behind the seemingly glamorous job of running a multi-million-dollar franchise. It might sound like fun to work for a football team, but Draft Day makes it clear just how much of it really is work, as Costner manages interns, soothes the bruised egos of star players, and deals with insubordinate employees, a pregnant girlfriend (Jennifer Garner), and an angry mother (Ellen Burstyn). This isn’t the side of pro sports shown on television—which is exactly why it’s refreshing to have a film about it.

It’s also fun to see Costner back in the world of sports, where he played so many of his most memorable roles, from Bull Durham’s Crash Davis to Tin Cup’s Roy McAvoy. Draft Day isn’t on par with those movies, but it shares a number of their qualities, including likable characters, sharp dialogue, and a feel-good story arc. Costner is getting older, but he’s retained his unfussy charm, and nobody in Hollywood can sell an inspirational monologue about the transcendent power of sports like he can. His performance alone will ensure Draft Day is watched on basic cable for years to come.

Don’t be surprised, though, if some of those cable viewers flip the channel during Draft Day’s finale, when the film succumbs to several egregiously ludicrous plot twists, and jettisons its previously believable portrayal of the day-to-day drudgery of sports management in favor of obviously manufactured Hollywood drama. Reitman’s suspenseful buildup to the draft only makes the laughable climax more disappointing. A setup this good deserves a better payoff.

The notion of the Reitman hero, the independent thinker swimming against the tide of conformity, surely has some personal resonance for its director, who’s spent more than 30 years producing quirky comedies within the constrictive confines of the Hollywood system. In Reitman’s time, he must have dealt with plenty of bosses like Molina, who wanted him to compromise his principles for the sake of big box-office, and collaborators like Denis Leary, who were too set in their own ways to consider bold new ideas. The biggest problem with Draft Day is that even as it shows Sonny sticking to his guns, its absurd, saccharine third act suggests Reitman didn’t stick to his, and allowed his latest celebration of free-spirited mavericks to get co-opted by the very kind of system they were created to criticize.