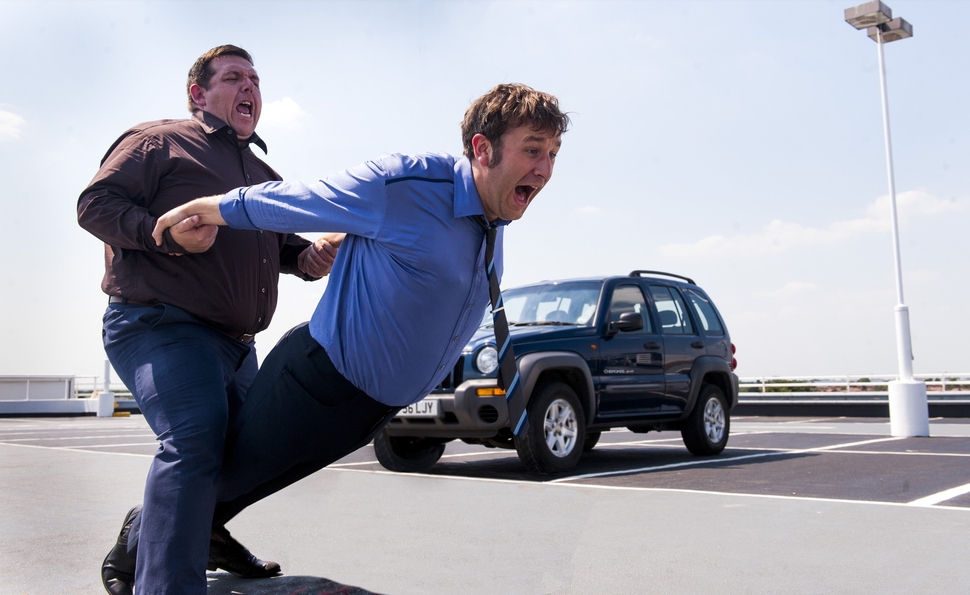 The romantic comedy Cuban Fury feels like it was lost on a studio shelf for a couple of decades, and only released after someone managed to scrape off enough cobwebs to see the cast list. Protagonist Bruce (Nick Frost) is a quiet, schlubby, middle-aged British man with a crush on his new American boss Julia (Rashida Jones), and a dormant talent for salsa dancing that might help him woo her. He’s too awkward for casual conversation, but when she runs over his bike and ends up driving him home, he realizes that stage one in expressing his affection could be meticulously making her a salsa mixtape for her car. Stage two, naturally, is rekindling his passion for salsa, and out-dancing the obnoxious co-worker who wants to claim her first.

Momentarily leaving aside everything else wrong with that premise, why on earth does a successful, upwardly mobile international sales manager, in a film set in 2012, drive a car with a cassette deck? The apparent answer isn’t something revealing about her finances or preferences, it’s just one of many potentially quirky but unexamined details that suggest Cuban Fury is more lazy throwback than self-aware genre pastiche. Its relationships and narrative are just as dated as Julia’s vehicular entertainment technology, but it wouldn’t have been a particularly good film 20 years ago, either.

When the story opens in 1987, 13-year-old Bruce is a junior salsa superstar, winning trophy after trophy with his sister Sam as his partner, until some bullies take exception to his silk-and-sequins costume and beat him up. Humiliated, he tells his coach Ron (Ian McShane) “Salsa is for pussies,” and quits the dance circuit. Twenty-five years later, he hasn’t found any passion to replace salsa. He’s become a engineer at a firm that manufactures heavy industrial lathes (another oddly idiosyncratic, potentially interesting detail that goes unexplored), and his friends and hobbies are hopelessly pallid: He plays golf often but rotely, and his buddies are a group of defeated sad-sacks who get together every week to tot up their failures at even making eye contact with women, let alone getting laid.

Then Julia arrives, and Bruce finds out she’s taking salsa lessons. (“Salsa. Why’d it have to be salsa?” he sighs, echoing Indiana Jones looking into a pyramid full of snakes.) So he decides to track down Ron, launch a dance-training montage, re-don the Cuban heels, and get his mojo back. Meanwhile, his endlessly obnoxious co-worker Drew (the ubiquitous Chris O’Dowd) decides to pursue Julia as well, to the point where Bruce and Drew both agree that whoever wins a salsa-off between them gets exclusive access to her.

The way Cuban Fury literally treats Jones as a contest prize is annoying, particularly since she’s supposedly in a position of competence and authority over the competitors. But that particular eye-roller pales in comparison to the way the film underserves and undersells her. Jones is an accomplished comic and the theoretical female lead, but the film never develops her past contest-prize level. It just shoulders her aside to make way for an overcrowded jumble of often-funny but  thematically incoherent comic business. McShane is wasted in a role with plenty of screen time, but no character past “Cranky McShane Guy.” O’Dowd gets the best lines because his crass, sexist role is all about delirious excess, but it’s also abrasive and one-note. (A typical bon mot, on seeing Julia: “I would make a splash inside that like a milk truck hitting a wall.”) Kayvan Novak, hilarious in Four Lions, shows up midway through the film and completely takes over as salsa fellow-traveller Bejan, a flashy, catty Sacha Baron Cohen type with plenty of snappy laugh lines and no narrative function. Add in extra business from Olivia Colman as the sister who only exists to provide Bruce with a cheering section and periodic dance-floor warm body, and Cuban Fury feels overpadded and distracted, with no time to establish its leads, let alone the bare connection between them that might give viewers a rooting interest in their future. There’s no sense that they’d make a good couple—Bruce just wants yet another unattainable female object, and has a vague inkling that he might, just once, have the tools to attain it.

But the real frustration is how the film underplays Frost in his first cinematic lead role after a hugely capable career of playing Simon Pegg’s sidekicks (in Shaun Of The Dead, Hot Fuzz, The World’s End, and more). In a more emotionally felt film, the idea of a middle-aged man finally expressing himself after a lifetime of caution might be immensely powerful. (Japan’s sweet 1996 hit Shall We Dance—later remade as a Richard Gere/J-Lo movie—hit exactly the right notes with the same ideas.) But in the same way Judd Apatow or Adam Sandler comedies have more fun with the leads’ man-child goofery than with the eventual tacked-on “time to grow up” messages, Cuban Fury spends much more time snickering at Bruce’s repression than giving any dimension to his redemption. He’s sidelined for most of the film, playing shy straight man as Drew, Bejan, and Ron abuse or inspire him. Even when he does step up 2 the streets, his newfound confidence is more physical than verbal, so he still doesn’t have his costars’ presence. He’s a sidekick in his own movie.

Even Frost’s dance moves get short shrift. His footwork was one of the inspirations for the film, since he’s said he has such surprising skills for “a big lump” that he wanted to show them off. But this is the kind of dance film where frenetic editing and manic camera movement make it hard to tell whether it’s Frost or a double on the floor. It’s understandable that first-time film director James Griffiths and editor Jonathan Amos want to give the dance setpieces the same jivey energy as the Tito Puente and Ray Barretto music all over the soundtrack, but focusing more on the cameras’ movement than the dancers’ movement just turns the rhinestone-bedecked Frost into another mechanically spinning disco light on the dance floor.

In the end, Cuban Fury pulls off something by keeping its expectations modest and its victories small, Silver Linings Playbook-style. It has the sense to present its end as a bare starting point for Bruce and Julia, not a happily-ever-after. But after so much attention thrown in random, incoherent directions, toward minor characters, they feel almost as much like strangers to the audience as they do to each other. It’s nice to see them find each other on the dance floor, but it would have been much more interesting if they’d found each other 90 minutes sooner, and the film had been as involved in their relationship as it is in the wacky characters surrounding and overshadowing them.