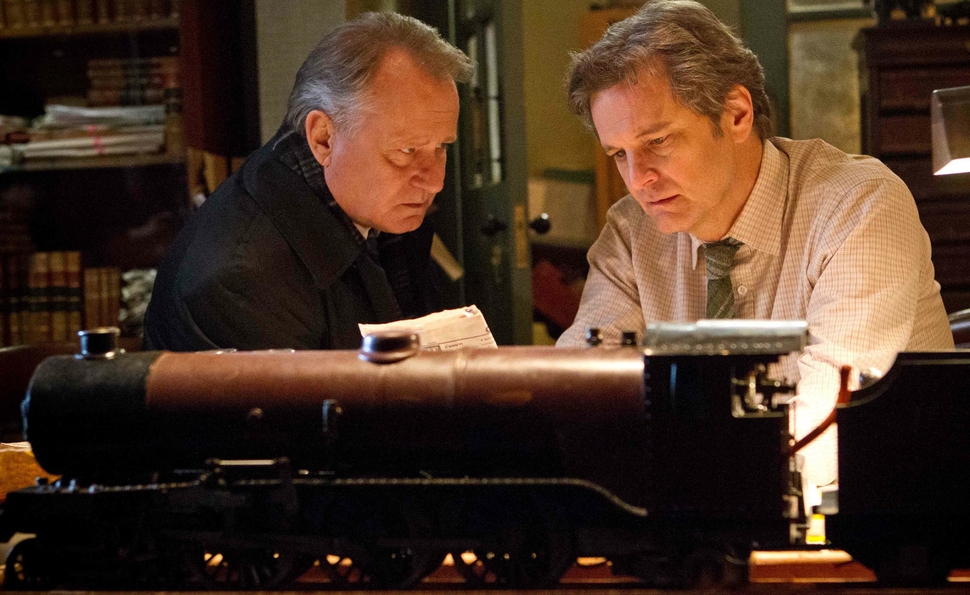 If Eric Lomax hadn’t existed, Harvey Weinstein would have had to invent him. As it stands, Weinstein merely had to distribute his biopic.

The life of the Scottish World War II vet—an avid train enthusiast whose post-war years were tortured by repressed memories of his time spent building Burma’s “Death Railway” as a Japanese POW—provides perfect fodder for the sort of polite, severely compromised period melodramas that Weinstein has churned into a self-sustaining genre of its own with films like Il Postino, The Cider House Rules, and The King’s Speech. But the indignities Lomax survived are just table-setting for his story’s ultimate human and commercial appeal. While any chronicle of the fall of Singapore and its scattered aftermath is a valuable addition to the canon of WWII narratives, Lomax’s saga emerged as a defining account not because of his traumatic experiences, so much as the way he revisited Burma several decades later, in a desperate bid to make peace with them.

Lomax’s journey has already been the subject of an award-winning autobiography and a 1995 TV movie (Prisoners In Time, starring John Hurt), but Jonathan Teplitzky’s The Railway Man contends that a man’s life story is never really told until he’s played by Colin Firth. And while history may indeed prove that to be true, the genteel gravitas Firth brings to the latest and presumably last screen depiction of Eric Lomax is typical of this handsome film’s insurmountable softness. The Railway Man is such a safe, respectful portrait of true-life catharsis that it feels afraid to reopen the same old wounds it exalts Lomax for confronting.

Working from a frustratingly staid screenplay by Andy Paterson and veteran Frank Cottrell Boyce (Michael Winterbottom’s frequent scribe), The Railway Man works best before it reveals the blood on its tracks. Following a useless pre-credits prologue that fails to resonate even when it’s inevitably referenced during the film’s climax, the film introduces Lomax in the early 1980s with a scene that feels like a cross between the meet-cute of Before Sunrise and the frailty of Brief Encounter, which the script promptly name-checks. A nervous train enthusiast with a savant-like knowledge of Scotland’s rail system, Lomax, on this particular day, has the good fortune to sit across from a casually attractive middle-aged woman named Patti (Nicole Kidman). They get to talking, they get to marrying, and then the wheels come off.

Shortly after their wedding, Patti begins to notice that Lomax has some demons. His episodes, which contemporary audiences will quickly diagnosis as symptoms of PTSD, seem to come from nowhere. He’s scattered, he’s distant, and when bill collectors come to the house to retrieve payments, he tries to murder them with a letter-opener. Understandably worried about her impenetrable husband, Patti seeks answers from his old war buddy, a framing device named Finlay (the sturdy, suddenly ubiquitous Stellan Skarsgård, relaying information without meaningful perspective, and altogether serving the exact opposite function he does in Nymphomaniac).

And so The Railway Man surrenders to an insipid flashback structure, a screenwriting plague that constricts historical dramas like a bad corset. Here, it again cleaves the past from the present in a way that cuts off the air between the two. Faster than you can say “Merry Christmas, Mr. Darcy,” the film travels to the Southeast Asian theater of World War II circa 1942, just a few months before Japan agreed to abide by the terms of the Geneva Convention.  Young Lomax and young Finlay (Jeremy Irvine and Sam Reid, respectively) are POWs enduring inhumane conditions along the half-built Burma Railway. When a Japanese soldier catches Lomax using a makeshift radio, the boyish engineer is interrogated and tortured within an inch of his life, a process overseen by a similarly fresh-faced interpreter named Takashi Nagase. Back in the 1980s, Lomax learns that Nagase is still alive, working as a tour guide at the same POW camp where their paths crossed four decades earlier.

The film’s most damning failure is that the fated reunion plays out like a meeting between inexplicably bitter strangers; The Railway Man is catastrophically incapable of bridging the gap between wounds and their scars. Hiroyuki Sanada delivers an unsurprisingly fine performance as the aged Nagase, but he and Firth are both hamstrung by a script that’s powerless to dramatize self-discovery. It’s telling that The Railway Man’s most unbelievable beats and reversals were all invented for the movie; it lacks the grace or vision required to enhance the truth by distorting the facts.

Teplitzky is a proven talent with an excellent crew, but even this film’s technical merits illustrate how disconnected it is: David Hirschfelder’s lush score is missing a memorable theme that might weave the disparate time periods together, while the pointedly composed wide shots in which the adult Lomax is trying to hold himself together are never meaningfully contrasted against his experiences as a young man.

It all amounts to a sincere tribute to Eric Lomax that ultimately feels like lip service. Lomax’s legacy is well-served by the film’s broad encouragement for people and nations alike to engage with the pains of their pasts, but The Railway Man illustrates neither the courage required for such reflection, nor the forgiveness that healing demands. On the other hand, perhaps the greatest testament biopics can offer their subjects is to be too awed by their stories to meaningfully retell them.