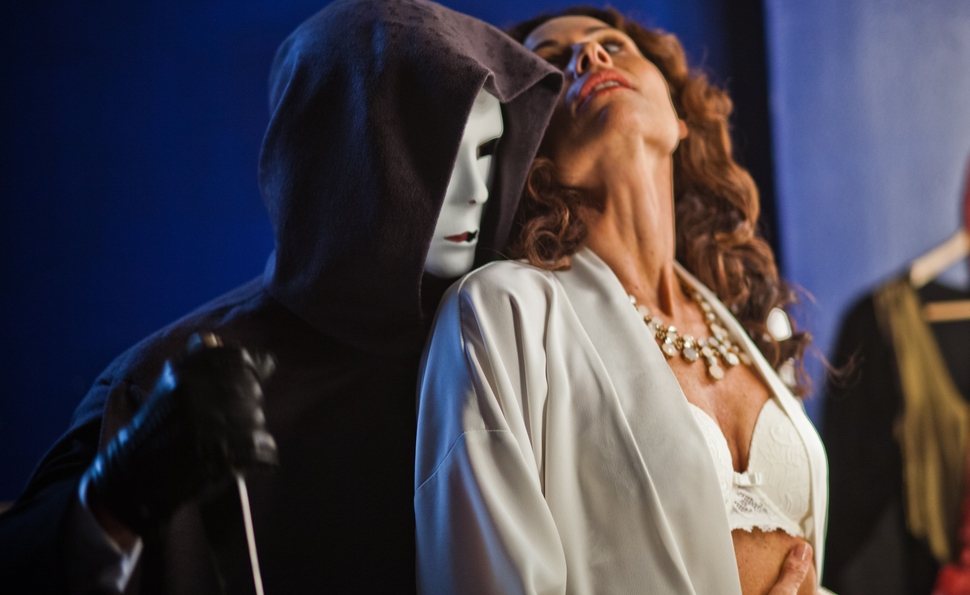 As genre hybrids go, there are a few precedents for horror musicals, but the ones that have worked—The Rocky Horror Picture Show, Sweeney Todd, Phantom Of The Paradise, The Happiness Of The Katakuris—have remarkable cult appeal, born of the delirious incongruity of staging showstoppers about the macabre. Jerome Sable’s Stage Fright attempts to fuse the musical comedy of Camp with a 1980s slasher film by way of Brian De Palma, wisely choosing De Palma’s Phantom Of The Paradise as a primary source of inspiration, and Carrie as a secondary one. Sable’s plug-and-play cult movie works like gangbusters in the opening-credits sequence, which follows a pre-credits bloodbath with the choreographed spectacle of fresh-faced art kids going off to music camp for the summer. But that’s the first and last time Stage Fright strikes a balance between its song-and-dance theatrics and the grisly business of those same kids being slaughtered by a masked killer. The songs are fine; the slaughter is sub-standard.

While this is a frivolous affair, Sable doesn’t go light on the gore. In the opening sequence, the lead actress of a new musical called The Haunting Of The Opera gets stabbed in the mouth, which immediately classifies the would-be hit as “cursed.” Cut to a decade later, when the actress’ talented daughter Camilla (Allie MacDonald) and her younger brother Buddy (Big Love’s Douglas Smith) are working in the kitchen at a performing-arts camp. As the camp struggles to get attention, its chief administrator (Meat Loaf) decides to stage a revival of The Haunting Of The Opera in a bid to win over the theater critic (James McGowan) who was wowed by the original show. Bad omens aside, the show goes forward and Camilla surprises everyone by trying out for the lead role; in order to get it, however, she has to compete with a snooty camper who’s willing to do what it takes to win over the leering director (Brandon Uranowitz). And the decision to stage the play kabuki-style plays into the hands of a masked killer who doesn’t appear to be a fan of musical theater.

The juxtaposition between happy Fame kids and darker goings-on behind the scenes gives Stage Fright a lift in the early going, a potent contrast aided by Sable’s decision to play the slasher-movie brutality straight. But before long, it’s apparent that Sable’s skills with music and lyrics far outstrip his ability to deliver the bloody goods. The musical numbers taper off substantially in the second half, when the killings escalate and Sable turns Stage Fright into a Scream-style whodunit: Is it the scowling janitor? The chief administrator? The persnickety stage manager? The suspiciously earnest kid who takes a special interest in Camilla?

The answer shouldn’t matter, but it consumes much of Stage Fright’s time when its energies might be better directed toward following through on its musical premise. Phantom Of The Paradise had the freedom to be a stem-to-stern musical odyssey because it wasn’t trying to be Carrie at the same time, and thus wasn’t hampered by the obligation of serving the horror at the expense of the songcraft. Sable so deftly sets the scene in the opening number that his failure to figure out how to give the stabbings a similar musicality is disappointing; his few attempts to give the killer a heavy-metal bent don’t play. Both sides of the horror-musical equation have to be roughly equal; making a generic slasher movie the engine of a mediocre musical throws the choreography off.

(Currently on VOD; in theaters May 9.)