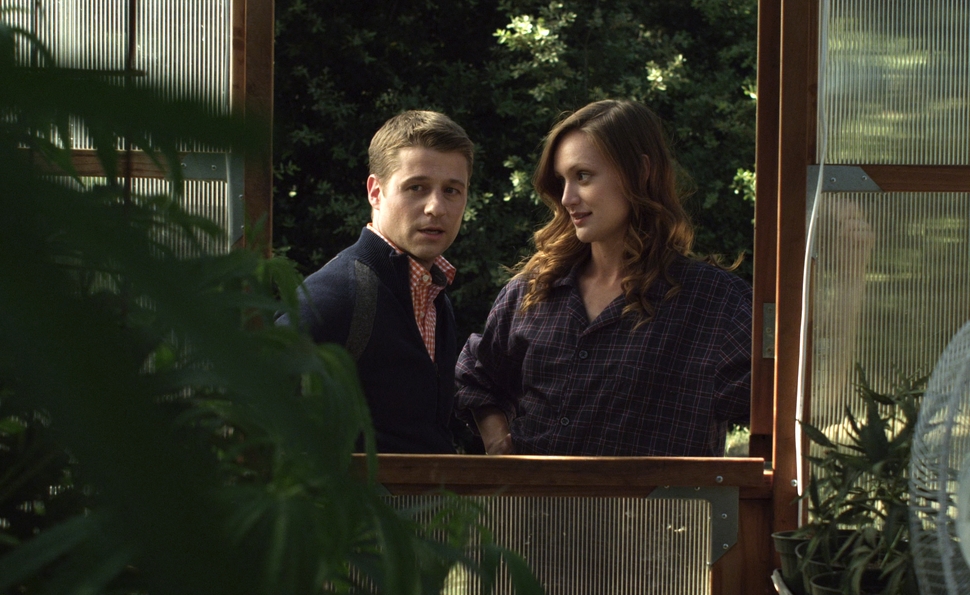 Goodbye World feels like the result of a merger between The Big Chill and the new millennium’s never-ending barrage of post-apocalypse movies. It’s both an ensemble dramedy about the shifting loyalties between a once tight-knit group of college friends and a thriller about how to survive the arrival of America’s seemingly inevitable doomsday. If those concepts sound like an incongruous pairing, that’s because they are.

As directed and co-written by Denis Henry Hennelly, in his second narrative feature effort, Goodbye World suffers from tonal and thematic ADD. Just when it seems content with being an indie doused in marital arguments and the flaring of old relationship wounds, it suddenly shifts its focus to the struggles of surviving in a society where the grid is down, urban riots blaze, and martial law has taken alarmingly immediate effect. This film can’t decide whether it’s a Noah Baumbach-ian character study or an episode of NBC’s Revolution.

The end of days, according to Goodbye World, comes when a cyber attack disguised as a text message brings daily life in the U.S. to a screeching halt. Through a series of semi-convoluted events, that cyber-attack also brings together a group of eight progressive university pals at the remote, Northern California home where James (Adrian Grenier) and Lily Palmer (Kerry Bishé) live off the land with their young, cherub-cheeked daughter. Their isolated, supply-stocked compound should serve as the ideal place to hunker down during a homeland-security crisis. The keyword: should.

Hennelly and co-screenwriter Sarah Adina Smith subtly capture wonderfully ironic details about the Palmers’ pre-apocalypse, farm-to-kitchen-table existence, which is all about living like Henry David Thoreau did, but with better wi-fi access. There’s a ripe opportunity in Goodbye World to really explore that lifestyle contradiction, which reflects a broader, antithetical American impulse to embrace technology while getting back to basics at the same time. (The United States: A place where it’s possible to buy organic vegetables at a farmers’ market while wearing Google Glass.) Hennelly almost seizes that opportunity, but then he gets distracted, immersing his story instead in the constantly erupting, alcohol-and-marijuana-fueled arguments between the group at the Palmer homestead, as well as the increasing threats from outsiders not far from their contempo-rustic front door.

Luckily for the director, he has a committed ensemble cast that’s capable, at least in certain stretches, of making the haphazardly exploding tensions seem believable. Most effective in this regard is Gaby Hoffmann as a steely, publicly disgraced former Senator’s aide who, following one particularly violent confrontation, sheds her hard shell and completely disintegrates into hand-trembling tears. Hoffmann’s relatable, raw shock briefly makes the stakes in Goodbye World feel significant and very, very real.

Unfortunately scenes like that only make the more Big Chill-ish moments—the smoking of pot in hot tubs, or the arguments over whether Lily ever fell out of love with her one-time fiancé Nick (Ben McKenzie)—seem even more trivial by comparison.

“What, we’re not allowed to have any fun in the apocalypse?” the perpetually drunk and/or high Lily shouts at the increasingly agitated James. Actually, it is possible to have fun in the apocalypse, and it’s even possible to juggle multiple genres and tones in the same apocalyptically themed movie. Edgar Wright did it just last year in The World’s End, to spectacularly hilarious and occasionally poignant effect. But despite flashes of potential, Hennelly proves that he hasn’t yet developed the same level of directorial shape-shifting finesse. When his World falls apart, all we hear are a lot of self-involved thirtysomethings, whining and sniping their way through the day after.