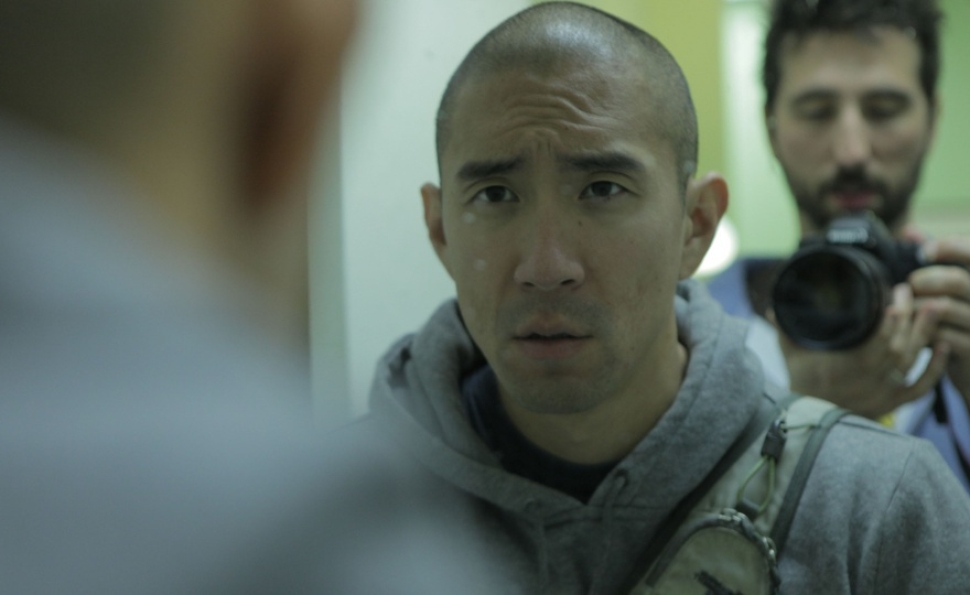 It’s hard to say which is more played out at this moment in cinema history: the found-footage horror movie or the vampire movie. Give some credit to Afflicted, then, for managing to fashion something reasonably compelling from a combination of the two. Longtime pals Clif Prowse and Derek Lee, who jointly wrote, directed, and star in their debut feature, achieve this not with their story (just a catalogue of the standard vampire myths) or their structure (a generic video diary, complete with tortured rationalizations for nonstop filming), but with remarkably inventive camerawork and impressive low-budget special effects. While what will happen next is never especially interesting, how it will happen, and from what unusual angle, generates enough excitement to keep things intermittently lively.

Having made short films together in real life since they were kids, Prowse and Lee play versions of themselves in the movie, using their own names. (Their backlog of footage, some of it dating back to when they were in the eighth grade, provides terrific verisimilitude.) “Derek,” who’s been working a boring desk job for the past five years, heads out on a globetrotting adventure, to be perpetually video-blogged by his best friend and traveling companion, “Clif,” an aspiring filmmaker. Early scenes are perhaps a bit too persuasive as the sort of breathless sightseeing monotony people post on Facebook all the time. While in Paris, however, Derek hooks up with a woman (Baya Rehaz) who knocks him unconscious and leaves a bloody gash on his left forearm. Shortly afterward, he begins demonstrating Chronicle-style superpowers, lifting a SUV into the air and outrunning a motorcycle doing 60kph. That’s just the beginning, however, and it soon becomes apparent that Derek can no longer endure sunlight or subsist on anything other than human blood—fresh human blood, no less. Moreover, the longer he goes without feeding, the more involuntarily aggressive, predatory, and outright homicidal he becomes, even toward his buddy Clif.

As actors, Lee and Prowse are only serviceable, though the former has a certain goofy charm (and it’s refreshing to see an Asian-American protagonist whose race is never so much as mentioned). As writers, they haven’t come up with a single original idea, and really huff and puff trying to justify why the camera keeps rolling beyond a certain specific point. As directors, however, they show enormous promise, using GoPro cameras and a chest-strapped body rig to depict Derek’s superhuman abilities from his own increasingly unstable (in every sense of the word) point of view. Multiple shots are thrillingly disorienting without straying into incoherence—a tricky line to walk—and it’s genuinely hard to tell whether certain effects, like Derek’s “sunlight test,” are practical or computer-generated. A climactic scene in which Derek battles the Parisian equivalent of a SWAT team is a hyperkinetic tour de force, heightened by the playful decision to leave a crucial stretch of French dialogue unsubtitled. (Those who know the language will be giggling to themselves, but the gist is readily apparent from the context.) Hopefully, next time these guys will expend their considerable talent and boundless energy on something a little less shopworn.