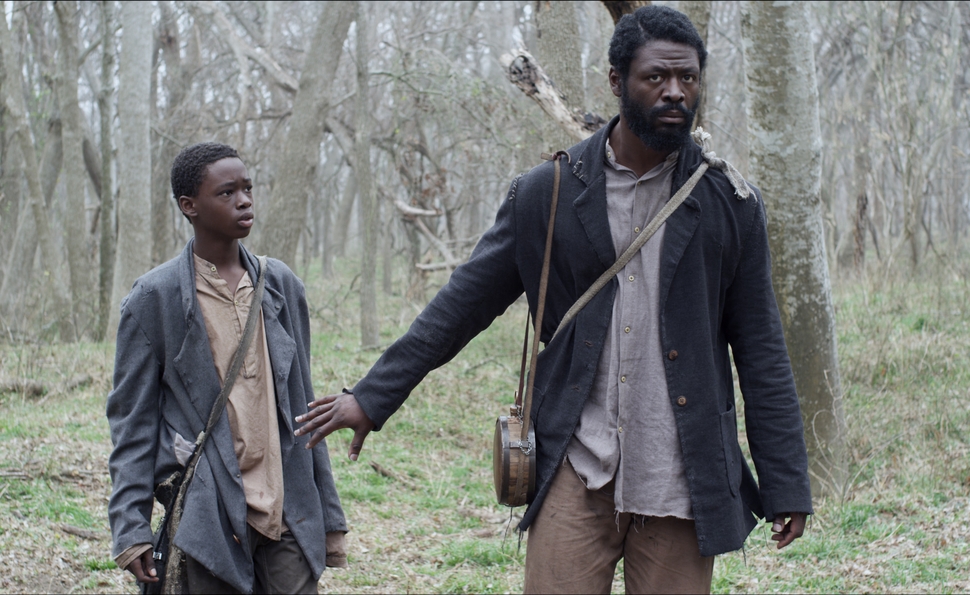 The Retrieval is a good movie, but it’s an even better example. Ostensibly the story of a young freedman realizing his agency in the aftermath of the Emancipation Proclamation, Chris Eska’s sober and engaging Civil War drama doubles as an inspiring portrait of a filmmaker eclipsing his negligible resources with his seemingly infinite resourcefulness.

It’s 1864, and President Lincoln’s landmark decree has cast the Confederate-held states into a strange limbo between law and order. Freedom is slowly trickling down through the South as fast as the Union forces can carry it with them, and millions of penniless former slaves are struggling to survive in an economy that was founded upon their unpaid labor. Will (Ashton Sanders) is a dazed pubescent boy who, along with his callous and controlling uncle Marcus (Keston John), is in the reluctant employ of a bounty hunter named Burrell (Bill Oberst Jr.), who uses them to earn the trust of local landowners and then root out the runaway slaves they’re hiding. It’s thankless work, the brutal emotional toll of which is captured in a wordless opening sequence that situates The Retrieval as a morality play in the eye of a raging battle for the soul of a young country.

Will’s most daunting challenge begins when Burrell sends the boy and his uncle across Union lines to retrieve a freedman named Nate (Tishuan Scott) and peaceably coerce him back into Confederate territory so that Burrell can collect the bounty on his head. Will is instructed to tell the target that they’ve been sent on behalf of Nate’s dying brother, though Will knows that Nate’s brother has been dead for some time. A taciturn man whose prevailing empathy is a stark contrast to Marcus’ cold nihilism, Nate quickly emerges as the father figure that Will has never had, and as the trio make the trek back south, it becomes clear that the boy will have to decide what kind of man he wants to be by the time they get there.

The Retrieval is first and foremost an effective dramatization of one of Lincoln’s most famous quotes: “Nearly all men can stand adversity, but if you want to test a man’s character, give him power.” Eska identifies the immediate aftermath of the Emancipation Proclamation as a prime opportunity to explore how the world is not what it makes of us, but rather what we make of it.

Eska brings the same soft touch to The Retrieval that he did to his similarly strong but less harrowing first feature, August Evening. The writer-director elicits a handful of nuanced and lived-in performances (most crucially from Scott, whose grounded but haunting work distracts from the predictability of Nate’s fortunes), the casual grace of which helps The Retrieval connect as the rare morality play in which a conscience isn’t a burden so much as it is a compass. Fleshed out via exposition so oblique that it makes the film seem needlessly embarrassed of its narrowness, Eska’s tight plotting relinquishes this story’s obvious and lingering political concerns to the immediate circumstances of its characters, admirably resisting the temptation to have Will look 150 years into the future and see how his choices might reflect our present day.

But the film is only allowed to be so rooted in its setting because Eska creates such a believable depiction of the era. The Retrieval is hardly the first indie to transcend its budget, but it’s one of the few to tackle the kind of prohibitively expensive period setting that has restricted such stories to prestige pictures. The ratio between apparent cost and evident verisimilitude is remarkable, an imbalance that occasional cracks in the film’s veneer often serve to reenforce. Matching the textured aesthetic of Meek’s Cutoff but falling well short of that film’s pedigree, The Retrieval feels like such an accomplishment explicitly because of its shortcomings. Its technical flaws keep peeking out from behind the scrim of authenticity, but seeing the movie struggle to suffocate the things it can’t afford to control counterintuitively bolsters appreciation for the things that it can.

Unfortunately, The Retrieval struggles whenever it seems challenged by its own startling authenticity. Certain developments seem overeager to locate Will’s journey in more relatable territory; Nate’s radiant decency is more than enough to make Will see him as an appealing father figure, and so their moments of conventional bonding ring falsely suburban. (A scene where Nate teaches Will how to throw an ax broadly doubles for a game of catch.) One enervating aside invites Will to flirt with a girl by a bonfire, as if normalizing Will’s maturation would help the film transcend its period setting. The film also suffers from the occasional crisis of confidence, which is typified by Yellow6’s overbearing electric score.

Ultimately, it’s how Eska makes use of what’s beyond the frame that makes The Retrieval such a wonder. It transforms what it doesn’t have the money to show into its greatest asset; using flashes of light to double for distant cannon fire and scores of “dead” Civil War re-enactors to hint at the massive battles taking place offscreen, Eska takes the bloodiest conflict in American history beyond the confines of its marquee battles. As a result, shots of Will and Nate walking through anonymous clearings are transformed via omission into a palpable death march through the wounded heart of a nation that’s bleeding out around them—they might as well be walking to Mordor. On the other hand, what Eska allows us to see is filtered through Yasu Tanida’s fearlessly crisp 4K cinematography, the digital varnish of which does wonders to imbue The Retrieval with an urgency that most Civil War films sacrifice at the altar of their aesthetic. While The Retrieval’s sense of place may ultimately be stronger than its sense of purpose, it works as the story of a young boy realizing his agency, and it galvanizes as the story of an independent filmmaker realizing another portion of his medium’s infinite potential.