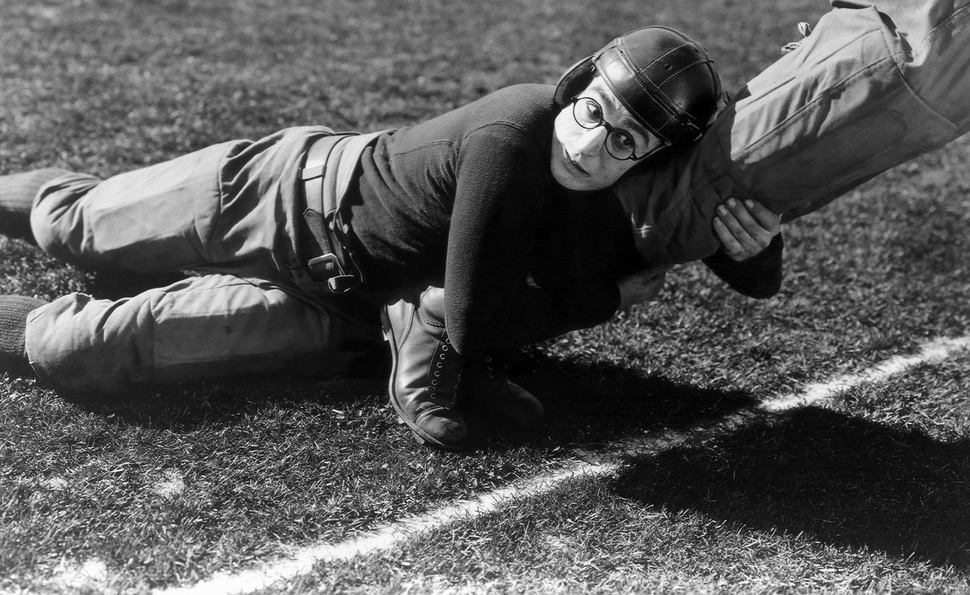 How good an actor was Harold Lloyd? Good enough that in his most famous comedies, he remained convincing as a bespectacled nebbish while pulling off gags that needed the skills and training of a world-class athlete (even though, for a good part of his career, he was missing a thumb and index finger on his right hand, thanks to an accident in the line of work). Good enough that his most famous onscreen persona was a man who won over women with his good nature, while in real life he and Bebe Daniels, one of his glamorous co-stars, enjoyed a public romance that involved them winning so many dance competitions that they were asked to sit them out and start serving as judges. And, finally, good enough that his biggest hit, the 1925 feature The Freshman, found him convincingly playing a baby-faced new college arrival at the age of 31.

Paradoxically, a few years earlier he might have been less convincing in the role. By 1925, Lloyd had traded in his first on-screen persona, the Chaplinesque Lonesome Luke, for what he’d call “The Glasses Character,” a hapless but indefatigable and improbably triumphant sap. Initially, that character had sharper edges, but by the time of The Freshman, he’d become the definition of a likable everyman, here taking the form of Harold Lamb, a middle-class kid bound for Tate University, where he hopes to make a splash. In preparation, he’s read books on college cheers (which he practices in his room), brushed up on novels starring Big Man On Campus Jack Merivale, and, most of all, studied the movie The College Hero, whose hero does a distinctive jig when making new acquaintances while greeting them with his catchphrase: “Step right up and call me speedy!” Thinking this is how it’s done, Harold heads to campus with plans to do the same.

From the moment he steps off the train, however, he’s bedeviled by upperclassmen—and, notably, descendants of the upper classes—who take advantage of his naiveté. As Harold strives to succeed in every aspect of college, from social life to sports, he doesn’t realize he’s getting ahead through some combination of cruelty and pity. (He’s allowed on the football team but never told his “back-up” role is just serving as the waterboy.) The Lloyd who introduced his Glasses Character in one- and two-reel comedies might have been content to let this set-up carry him from one comedic setpiece to the next. The Freshman has these in abundance, most memorably an impromptu bit of public speaking made difficult by a kitten, a party scene in which Harold struggles to hide an unraveling suit with the help of a drunken tailor, and a famous climactic football game. But Lloyd and his creative team—two directors and four writers working in the service of the star’s vision—also have a story to tell, first establishing Harold as a character and investing in his relationship with Peggy (Jobyna Ralston), the humble daughter of a landlord that’s been putting him through the wringer. Flawlessly executed and edited for maximum impact, the gags have timepiece precision, but Lloyd always sells his mishaps as things that just kind of happen to his character. And as funny as those mishaps are, The Freshman only works because it keeps viewers rooting for its hero.

Curiously, Lloyd cut one of the film’s most emotional scenes when The Freshman was re-released, a version shown for years. It’s restored here, but that bit of second-guessing is pretty much the only wrong move he made with the movie, from the first frame to a final shot that’s at once tender and hilarious. It’s no wonder that it inspired an immediate boom in college comedies, or that its influence can still be felt today in every movie where outsiders triumph over headless snobs. Lloyd possessed almost superhuman abilities, but his skill at channeling them into characters as put-upon, fragile, and capable of failure as the rest of the world might have been his greatest gift of all.

Criterion has loaded this Blu-ray/DVD edition with extras sure to delight Lloyd fans, starting with a sharp transfer of a 1998 restoration of the film. Carried over from an earlier DVD edition, there’s an audio commentary featuring critic Leonard Maltin, film historian Richard Bann, and Lloyd archivist (and prolific sitcom director and producer) Richard Correll. Other items include material from “Harold Lloyd’s Funny Side,” a ’60s repackaging of The Freshman that opens with an intro from Lloyd and a 30-minute greatest-hits reel; a Lloyd appearance on What’s My Line?; a breezy, informative appearance at a 1963 tribute during which Lloyd reminisces about his early days before a crowd and fellow honorees such as Jack Lemmon and Delmer Daves, while Steve Allen emcees; and a conversation between Correll and filmmaker and historian Kevin Brownlow (whose Harold Lloyd: The Third Genius—which can be found on Criterion’s earlier Safety Last! set—is essential viewing). John Bengtson contributes a look at the locations used to make The Freshman, which include the campus of USC. Also included are three Lloyd shorts: the one-reel “The Marathon,” and “High And Dizzy” and “An Eastern Westerner,” a pair of two-reelers. “High And Dizzy” features some of the daring stunt work Lloyd would push even further in Safety Last!, and “The Marathon” includes an inspired mirror gag. But “An Eastern Westerner” is the whole Lloyd package, setting his clueless East Coast party boy loose in the Wild West, and climaxing with a scene in which he both foils a Klan-like gang and gets the girl with some help from a moving train.