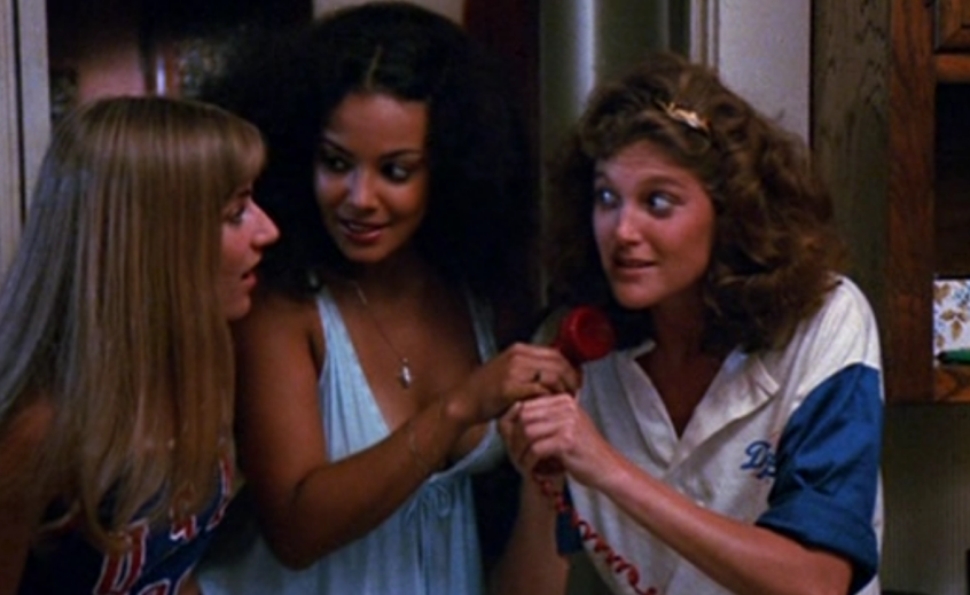 The ratio of jump scares to actual danger in the 1981 Roger Corman production The Slumber Party Massacre is about five to one, with a lot of old favorites like the tumbling of metal garbage cans and a housecat leaping out of a closet. But there’s one jump scare that suggests why this hunk of slasher cheese is a little smarter than most. The madman here is a driller-killer named Russ Thorn (Michael Villela), recently escaped from prison and eager to disrupt the dumb pranks, sex talk, and casual disrobing that’s certain to happen when the members of the girls’ high-school basketball team have a sleepover. Before the get-together, though, the film follows the coach to her front door; just as she’s about to open it—ziiiiiiiip!—a drill bit goes right through the wood toward her face. Could it be crazy-eyed Russ Thorn, warming up before the main event? Nope, it’s just the carpenter installing her new peephole.

There’s a healthy smattering of such vive la différence moments throughout The Slumber Party Massacre, which has a lengthy checklist of requisite Corman elements to tick off before it teases and subverts genre clichés. The first-time director, Amy Holden Jones, has a fascinating history as one of the few women in the Corman club, working as an editor on Joe Dante’s 1976 spoof Hollywood Boulevard and befriending Martin Scorsese, for whom she edited the short film “American Boy” and served as an assistant on Taxi Driver. (She also married Scorsese’s cinematographer, Michael Chapman.) Given the opportunity to direct for Corman’s New World Pictures, Jones chose a script by Rita Mae Brown, a writer and feminist whose 1973 novel Rubyfruit Jungle (a reference to female genitalia) announced her as an author concerned with lesbian themes. Given that the only lesbians who appear in Corman films tend to be of the lipstick variety, how did Jones and Brown set about reconciling their agenda with his?

The answer is, they mostly didn’t, but The Slumber Party Massacre still isn’t quite like any movie of its kind. What survives from Brown’s script is the idea of the drill as a phallic symbol, and the terror of young women who confront it. But first, Jones has to meet the compulsory requirements, which here leads to a post-practice shower scene that’s hilariously mechanical in its nudity, eschewing softcore sleaze for almost clinical scans of the female form. From there, a few of the girls follow Trish (Michele Michaels) to an old-fashioned sleepover at her house while her parents are out of town. Before Russ arrives for the massacre, the film stalls for time by springing fake scares and having him drive around in a stolen telephone-repair van, murdering other people first. Meanwhile, Trish and her friends drink, smoke pot, order a pizza, and undress in front of unshaded windows.

Though the sequels to The Slumber Party Massacre venture into outright sex comedy, Jones tries the more effective tack of playing the slasher stuff straight and inserting clever visual jokes when she has the opportunity. A scene where a panicked victim goes through potential weapons in a basement workshop—a precursor to Evil Dead II and Pulp Fiction—turns from scary to funny when she chooses a power saw and dashes up to the stairs, only to run out of extension cord. Jones also honors Brown’s central metaphor whenever Russ turns up with his power drill, twisting the fear of violation into a fantasy of castration that plays out with amusing frankness.

The trouble with the film is that Jones and Brown have to concede way too much up front. Making art out of a movie called The Slumber Party Massacre, with all the prerequisites of boobs and blood, in addition to a tight budget and shooting schedule, makes acts of subversion more the exception than the rule. Stretches of the film are indistinguishable from other slasher cheapies of the time, and Jones’ skill (or even interest) in frightening an audience is negligible. But every once in a while, there’s a scene like the one where Trish’s friend gets hungry while waiting for the killer to return, and crawls over a dead pizza guy to peel off a slice. Vive la différence.

Jones and two of her actors, Villela and Debra Deliso, contribute a commentary track that the whip-smart Jones dominates with details about her intentions, her background in vérité documentaries, and the fun of being a student in the Corman school of filmmaking. Jones says she never would have made the film if not for the satirical component, and blasts critics who chided her for making it while giving a pass to the Corman exploitation movies directed by men like Scorsese, Francis Ford Coppola, and Jonathan Demme. A 25-minute making-of documentary called “Sleepless Nights” opens with hilarious footage of a teenage boy jumping up and down after getting a VHS copy of The Slumber Party Massacre for Christmas, and delves into the cult favorite from there, with details about Jones filming scenes from the script as an audition for Corman, and Villela’s Method tactic of skulking around the set, never talking to the other actors. Also included are a strange interview with Rigg Kennedy, who has a bit part as Trish’s next-door neighbor, as well as trailers for The Slumber Party Massacre and two sequels, and a stills gallery.