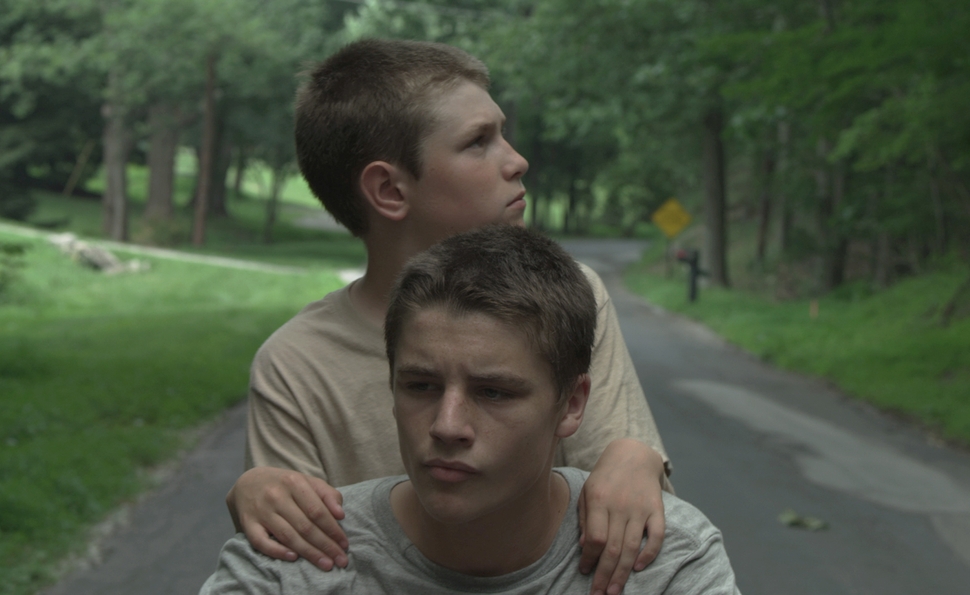 Influence is a tricky and surprisingly fluid thing. Early in his career, Paul Thomas Anderson was perceived as a flagrant imitator of Robert Altman and Martin Scorsese; looking back now, it’s hard to see Boogie Nights as anything but his own work, even though his borrowed moves are just as obvious as they always were. Similarly, contemporary reviews of David Gordon Green’s first feature, George Washington (just re-issued on Criterion Blu-ray), largely noted its huge debt to Terrence Malick, with skeptics dismissing it outright as a pale Malick imitation. But 14 years later, along comes Hide Your Smiling Faces, a low-budget American indie that somehow strongly resembles George Washington without looking much like a Malick film at all. Though the film opens with a shot of a snake devouring a small mammal, writer-director Daniel Patrick Carbone mostly avoids animism or the merely picturesque, focusing instead on the sort of intensely natural yet weirdly formal interactions between young people that Green initially favored. Right now, the result feels too derivative to be truly impressive, but history suggests that such opinions may change.

Actually, in some respects, the previous film Hide Your Smiling Faces most explicitly recalls is Stand By Me, though its sensibility is orders of magnitude more arty and less populist. For one thing, it’s entirely populated by boys (possibly not a single girl is so much as glimpsed): 14-year-old Eric (Nathan Varnson), his younger brother, Tommy (Ryan Jones), and their various friends in the rural area of New Jersey where they live. Adults are mostly ciphers, representing threats or sources of disappointment. And the action, such as it is, commences when a couple of the kids discover the corpse of one of their peers, inspiring unbidden reflections on mortality. In this case, it isn’t even clear exactly how the kid died—he’s found at the foot of a high bridge, but nobody has any idea whether he deliberately jumped off, or just slipped and fell. His vaguely abusive father (Colm O’Leary), who lives near Eric and Tommy, seems like the kind of dad who could inspire a suicide, especially in the absence of a mother; he also constantly harasses Eric and Tommy’s dog, leading to a war of intimidation involving home invasion and animal carcasses.

The latter element is just one of the multitude of ways in which Hide Your Smiling Faces emphasizes death, which surrounds these unusually ruminative boys on all sides, even before the body turns up. Carbone pushes the doomy ambience pretty hard, skirting dangerously close to “tone poem” territory; even the title, to which no reference is ever made, insists on seriousness. The film runs just 80 minutes, but the single-mindedness still becomes stifling. Thankfully, Carbone has a superb eye, and he does allow for playful moments here and there—one conversation between Tommy and a friend, which appears at first to be yet another death debate (“So you don’t wonder what it feels like?” “Well, sometimes I do. How about you?”), turns out to be about kissing, which they then hilariously practice on each other with a sheet of cellophane between their lips. All in all, Smiling Faces is a strongly promising first effort, introducing a talented filmmaker who’s still in the process of finding his own voice. Still, don’t be too surprised if, three or four features down the road, it retroactively looks much more singular.